Looking Ahead: Could Larry Butler III Be Late-Round Draft Prospect for Vikings in 2016? 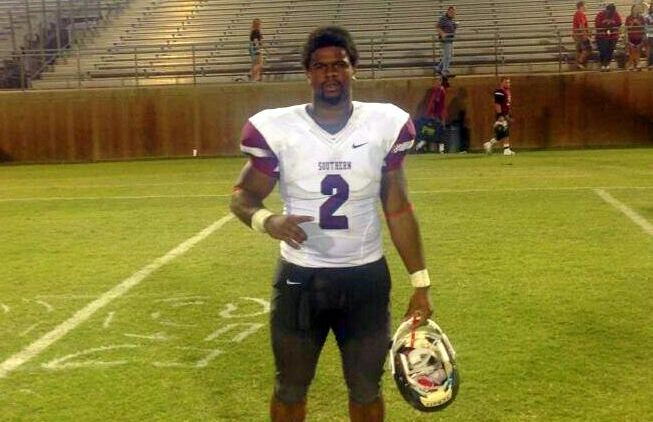 Thanks to Luke Inman for his collaboration on this piece.

But there’s no doubt about it – he could be a significant target in the 2016 NFL Draft. In May, Butler was referred to as “the best linebacker prospect you haven’t heard of.” We want to make sure that you hear about him.

Luke Inman, of eDraft Sports, said the following of Butler:

“He’s the epitome of a student athlete not giving up on his dream. While his story may never end up on the movie screen like Michael Oher and The Blind Side, it is one in which children following his footsteps should encounter as it speaks to the passion, heart, and determination to not let anything get in his way of reaching his goals. Of course, that’s just off the football field. Between the hashes, Butler is one of the most sought-after and talked-about Division II linebackers in the entire country.”

Heading into his final season of college before entering the Draft, Butler is confident in not only the physical skillset he brings to the table but also the mindset and work ethic he demonstrates on a daily basis.

“I’m a different breed, if you will,” Butler said. “I eat and sleep football […] a lot of guys want what comes with the game of football but don’t actually love it. This is all I have, and it’s all I want to do in life. I want to be the best and remembered forever.”

A native of Baton Rouge, LA, Butler started playing football at age 11 and immediately fell in love with the game. He started out playing running back, and it didn’t take a long for that dream of playing professionally to cement itself.

Butler attended Southern LAB High School and played three years of varsity ball. It was during his time at Southern that he transitioned from running back to linebacker. Butler entered high school rather small, weighing in at 165 lbs, but by his second year he had bulked up to 208 in pursuit of a scholarship. His size then better fit into the LB position, and he hasn’t looked back since. As a senior during the 2009-10 season, Butler tallied 113 tackles and added two sacks before earning a spot on the All-State team.

Immediately following graduation, Butler attended Sacramento City College for two years. Although he decided to redshirt his sophomore year, the middle linebacker impressed as a freshman and landed a spot on the All-Conference first team. Following SSU, Butler went to Eastern Arizona for two years.

Butler then attempted to transfer to a Division I school, but because of a delayed transcript and facing ineligibility, he could not be accepted. Consequently, Butler decided on Southern Nazarene University, a Division II school.

In 2014 Butler played in 11 games for the Crimson Storm and turned plenty of heads. In that time, he recorded 93 total tackles—nine of those for losses—two sacks, and two fumble recoveries.

Although initially frustrated to not have the opportunity at a Division I school, Butler sees it not as a road block but instead as a motivator to play even harder.

“Having to go the Division II route has definitely given me a chip on my shoulder,” Butler said. “But also, playing for a small school has helped me to stand out a lot.”

Butler has already spoken with several NFL teams, and he feels his chances in the 2016 Draft are great. Although he won’t be projected in the top rounds, coaches and scouts are intrigued by his style of play, and he could easily go in the fifth or sixth round and add a solid addition to any team. Butler’s confidence is high, as he identifies himself as the strongest MLB in his draft class.

Confidence is a huge asset to a player like Butler who initially flew under the radar, and he’s taken it upon himself to continue working hard not only on the field but off the field as well, self-advocating and showing teams what he has to offer.

16 Tackles, 1 tackle for loss and 1 forced fumble with a broken forearm vs Southern Arkansas.. https://t.co/3wQUgAxUdp ….

He has caught the attention of numerous individuals, including Inman, who acknowledges Butler’s athleticism but looks beyond that to also see technique.

“As a film junkie, the physical attributes are easy to get ballooned and overrated,” Inman said. “What I want to see from a football player, specifically at the linebacker position, are his natural instincts for the game—and Butler has that in spades […] he’s a player who flies to the ball and plays through the whistle. His nose for the ball and ability to diagnose the play before it happens is what allows him to put himself in the right position to finish the play time and again.”

Inman identified Butler has having a high football IQ in addition to a “nonstop motor and intensity.” Inman spends hours each week watching film and analyzing various prospects; he says the unique combination of skills that Butler brings to the table has successfully piqued the interest of national scouts.

Butler stands out as a versatile LB that could add depth to a number of rosters. Could Minnesota be a potential landing spot for him in 2016?

It’s no secret that the Vikings have been building their linebacker pool over the past year or two, and they’re looking to work with young talent. Some of their standout veteran guys most likely will not be playing in a season or two, so looking ahead and establishing a core is key.

Butler is someone who’s gone relatively unnoticed until now, but that could be to his benefit when a team is able to steal him at a later point in the Draft. The linebacker is not only realistic about his platform, but he also embraces it and uses it as a daily motivator.

Naturally, the same question will arise for Butler that comes with any college athlete: will he be able to make the jump to the pros? Will he offer the same skill set at a higher level after playing against smaller school opponents?

We think he can.

“[Butler has a] humble attitude, passion for the game, and drive to get better each day on and off the field,” Inman said. “I know I can speak for myself when I say I’m not betting against him, and I’m truly looking forward to the day this young man reaches his goals of playing in the NFL.”

Who knows? Maybe we’ll see him in purple someday.