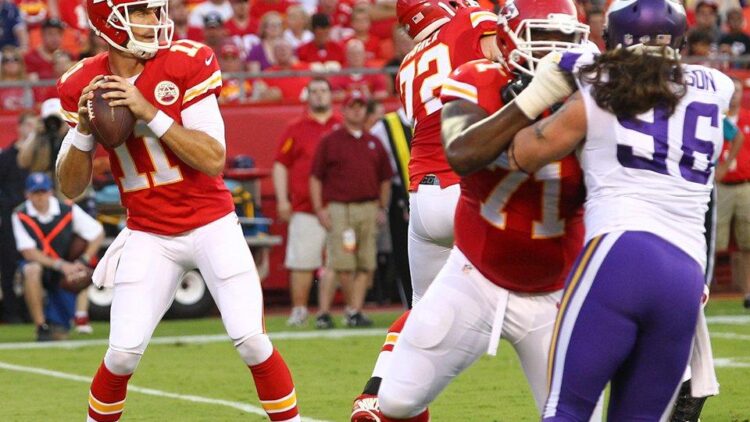 As Jamaal Charles thrashed and clutched at his right knee late into the Chiefs’ loss to the Chicago Bears yesterday, I was immediately reminded of Adrian Peterson’s devastating knee injury in 2011. Two All-Pro running backs, two torn ACLs, and two long roads to recovery.  Peterson defied the odds, making an improbable comeback to win the rushing title and MVP award behind a 2,000-yard season in 2012. Charles, meanwhile, will try to return from his second torn ligament in four years — a rare feat in the increasingly-violent, physical world of the NFL.

When the Vikings and Chiefs meet this Sunday, Peterson will be on the field, while Charles will be forced to watch from the sidelines, making this game much more about the quarterbacks and defenses than a meeting of the league’s best running backs. Head coach Mike Zimmer spoke to the media this morning, and when asked about the Chiefs, praised Kansas City’s talent at a number of different roster positions:

[quote_box_center]”Offensively they’re – wide open would be a good way to describe them. Quarterback scrambles, he can be very, very accurate. They’ve got a tight end that’s very dangerous, wide receiver that’s excellent. Obviously I don’t know about [Jamaal] Charles – I know he’s good.”[/quote_box_center]

How important has Charles been to the Kansas City Chiefs’ offense this season? Before leaving yesterday’s game in the third quarter, he had been targeted 30 times by quarterback Alex Smith, putting him just behind Travis Kelce and Jeremy Maclin for the team lead. As a runner, Charles had rushed the ball 71 times for 364 yards, averaging 5.1 yards per carry and 72.8 yards per game.

With Charles on the field yesterday, the Chiefs outscored the Bears 17-3. Without him? Chicago rallied back to win 18-17, scoring two touchdowns in just over three minutes at the end of the game. In his place, second-string running back Charcandrick West carried the ball seven times for 31 yards, making little impact against the Bears’ suddenly-stout front seven.

Based on Zimmer’s comments, the Vikings are going to focus their defensive efforts on limiting Alex Smith’s scrambling ability and negating any big plays from Jeremy Maclin and Travis Kelce.

Without Charles, the offense runs through Smith, which could spell trouble for the 1-4 Kansas City Chiefs this week. Smith’s earned the label of a game-manager in recent years — as evidenced by his 7.0 yards per attempt in 2014 — but his legs have always been one of his better attributes as a quarterback. Last season, he rushed 49 times for 254 yards, scoring one touchdown in Andy Reid’s varied, option-based attack.

Passing the ball, though, Smith has been average at best. Too often, he checks down to running backs and tight ends underneath, missing open receivers down the field. In 2014, for example, he attempted just 5.2 percent  of his passes passes over 20 yards, and the addition of Jeremy Maclin has been negligible at best — Maclin has just one touchdown through five games. Kelce, on the other hand, has been quiet since scoring two touchdowns Week 1, averaging less than five catches per game.

For all of his negative play, Alex Smith has been surprisingly accurate with the football. For his career, Smith is a 60.5 percent passer, and since 2012, has completed more than 65 percent of his passes twice (2012 and 2014). When given time in the pocket, Smith has the ability to step up and deliver passes anywhere on the field, but that hasn’t been the case in 2015.

His offensive line has been terrible, allowing 21 sacks through five games — good for more than four sacks per game. For comparison’s sake, Teddy Bridgewater has been sacked 13 times through four games, with seven of those coming against the Denver Broncos in Week 4. It’s been an ugly sight in Minnesota, and an even more horrific situation for Alex Smith in the pocket (or non-pocket, given Kansas City’s struggles in pass protection).

Mike Zimmer’s team is slowly rounding into form, and after a week off, is chomping at the bit to set foot back on the field. Without Charles, the Chiefs will need Alex Smith to play his best game of the season against a ferocious Vikings defense, which is highly unlikely given their success against opposing quarterbacks at TCF Bank Stadium.