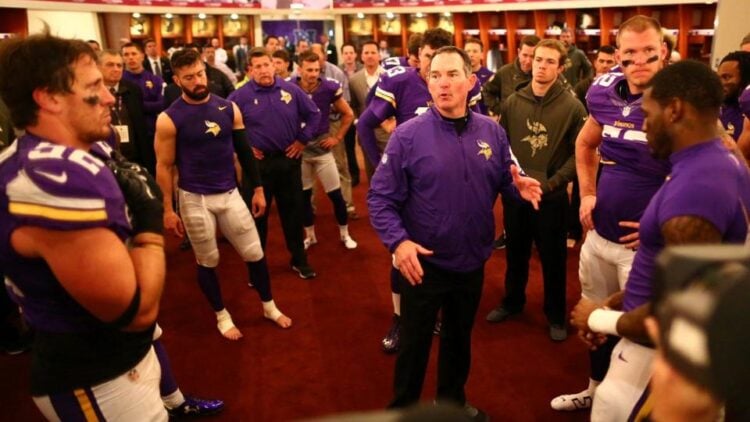 I’ve repeatedly called Mike Zimmer’s defense aggressive, his coaching style brash, but never has he crossed the line into “dirty” territory. That special place is reserved for coaches like Gregg Williams, whose ties to the Minnesota Vikings trace back to 2009, when his New Orleans Saints defense nearly crippled Brett Favre in the NFC Championship Game. It was later revealed that Williams was the architect of the team’s “Bountygate” scandal — a deliberate injure-for-money operation designed to motivate defensive players.

After his year-long suspension following the league’s investigation, Williams spoke on the scandal and his role in the matter. “One of the things was it was on my watch, but there was nothing that hasn’t been done in the last 50 years in the sport and there was nothing done to try to hurt somebody,” he said.

Zimmer would have to disagree, especially after yesterday’s chippy, playoff-like game that saw Rams players repeatedly target Teddy Bridgewater. The Vikings’ second-year quarterback was the victim of not one, but two questionable hits late in the game, with the final blow knocking him out for good. You’ve seen the play; Bridgewater scrambles and slides, but Rams safety LaMarcus Joyner launches himself into the quarterback’s head, briefly knocking Bridgewater out. It was clearly a dirty play, and one that left Zimmer furious at the podium:

[quote_center]”Well, we’re a disciplined football team, we do things right. That’s why we are the least penalized team in the league, because we play by the rules, we continue to play by the rules and just because other teams don’t do it doesn’t mean we’re going to do it.”[/quote_center]

The game could have easily turned and become ugly after Bridgewater left for the locker room, but Zimmer supressed the fire to keep his team focused. They stuffed the Rams on the first overtime series and rode the legs of Adrian Peterson to a victory. For the second time in as many weeks, Blair Walsh kicked the game-winning field goal to move the Vikings to 6-2 and a share of the NFC North lead.

More than the play of Linval Joseph, Peterson, and Anthony Barr, it was the Vikings’ composure, discipline, and restraint that secured their fourth-straight victory. Despite the Rams’ best efforts to swing the game in their favor, Minnesota followed Mike Zimmer’s calm, collected script to yet another win.

Although the Vikings and Rams entered Sunday as near-equals, their records didn’t reflect how different these teams truly are. Starting with penalties, the Vikings are the league’s least-penalized team, with just 45 penalties through eight games. The Rams, meanwhile, are one of the league’s sloppiest teams, and it showed on Sunday afternoon, per Pro Football Focus:

[quote_box_center]One of the stories of the game for the Rams was their lack of discipline. This manifested most visibly in their penalty problem. On defense alone, seven different players were flagged. The Vikings were gifted six first downs via penalty and countless other second chances due to those mental errors. It’s not just a one-time thing, either. The Rams -14.9 overall penalty grade is the second lowest in the NFL.[/quote_box_center]

Early in the game, Bridgewater made use of the hard count, consistently taking advantage of the Rams’ aggressiveness to draw defenders offsides. It worked, and Bridgewater repeatedly moved the chains without ever having to snap the football. For the day, the Rams tallied 12 penalties for 87 yards, while the Vikings were flagged just six times for 67 yards.

Their discipline stems straight from Mike Zimmer’s presence in the locker room, and his consistent leadership shined through despite a number of injuries on Sunday. Rookie cornerback Trae Waynes stepped in for a concussed Terence Newman, second-year linebacker Brandon Watts played well in place of injured Audie Cole, and Shaun Hill protected the football in relief of Bridgewater.

Watching players seamlessly replace starters not only signaled the depth of the roster, but exemplified how well this team is coached. Sunday wasn’t the only example, though — rookies like Eric Kendricks, Danielle Hunter, and Stefon Diggs have been playing at a high level all year.

The brand of football that Mike Zimmer’s developing — hard-nosed, technically sound, disciplined — can be replicated and repeated when it truly counts; in the playoffs. The remaining schedule won’t make the task any easier, but the Vikings can play well into January if they continue to stick to Mike Zimmer’s simple script.