Quote of the Week: 49ers Bracing for Adrian Peterson 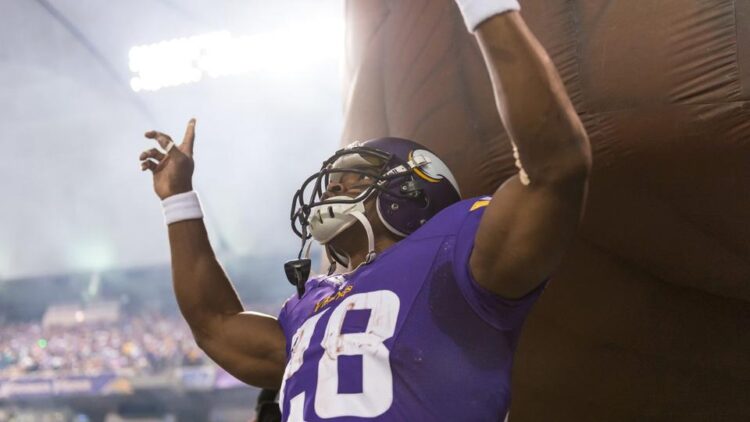 I’m taking a different approach with this week’s Quote of the Week, going behind enemy lines to get a sense for San Francisco’s Week 1 preparations. Since I technically live in 49ers country, and work just minutes from their new stadium, I hear the chatter almost every morning on my way to work. And this week’s radio waves were filled with talk of stopping Minnesota Vikings running back Adrian Peterson.

On Friday, 49ers defensive coordinator Eric Mangini addressed The Return and spoke to Peterson’s unrivaled abilities, which fans will get to see for the first time since the All-Pro running back took the field in September 2014:

[quote_box_center]”(Peterson) tests the integrity of your front,” Mangini said. “And there are plenty of examples on tape where things have broken down, and he generates something that a lot of backs can’t generate.

“Plus, he’s a guy that gets stronger as the game goes on. It’s not like he shoots his gun early in the game and slows down. He builds tempo.”[/quote_box_center]

According to Chris Tomasson of the Pioneer Press, Peterson has struggled against the 49ers in his career. Through three games, he’s carried the ball 58 times for 174 yards, averaging just three yards per rush against a historically stout defense.

Will history repeat itself tonight, or, will Adrian Peterson finally crack the century mark against the 49ers? Given San Francisco’s exodus on defense, the latter option feels like a safe choice.

Gone are Aldon Smith, Justin Smith, Patrick Willis, Chris Borland, and a host of other 2014 contributors. The game’s best linebacker, NaVorro Bowman, returns to command the middle of the defense, but the 49ers are fielding a relatively young, inexperienced team this season — the team’s average age is 28.5 years-old, per the Sacramento Bee.

That age gap will be felt most in the secondary, where the 49ers will likely field unproven cornerbacks Keith Reaser and Kenneth Acker next to veteran Tramaine Brock. Even with Adrian Peterson in the backfield, Norv Turner and Teddy Bridgewater could throw the ball early and often to take advantage of those mismatches in the passing game.

Up front, the 49ers are built to stop the run, anchored nose tackle Ian Williams and defensive tackle Quentin Dial. Their “pass rushers,” Aaron Lynch and Ahmad Brooks, are stout run defenders with the ability to put pressure on the quarterback, but the loss of Aldon Smith will greatly affect this team’s ability to attack Bridgewater.

With their deficiencies in the defensive backfield and at the line of scrimmage, Eric Mangini will dial up a number of blitzes to get to the quarterback. The San Jose Mercury News described Mangini’s defense as a scheme with “aggressive assignments and deceptive moves,” which will make their appearance in the form of delayed NaVorro Bowman blitzes and defensive line stunts.

If the Vikings’ retooled offensive line can hold their ground in pass protection tonight, they’ll open up opportunities for Adrian Peterson in the running game. Success from Bridgewater and his receivers will free up the box — the area of the field surrounding the line of scrimmage — and create space for Peterson to work.

Still, Peterson may not need perfect blocking against the 49ers. Just ask Mangini — he thinks Peterson will be successful no matter the defensive scheme or assignment.