VT Question of the Week: Who Will Score the First Vikings TD This Season? 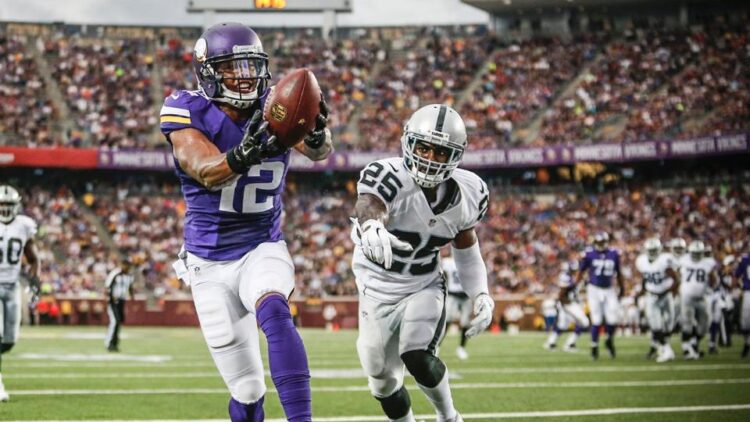 Adam: Kyle Rudolph
Last year at about this time, there was an expectation that Kyle Rudolph could fit into Norv Turner’s offense in a similar way to what we saw out of Antonio Gates for so many years in San Diego. Health issues combined with poor quarterback play to derail those hopes last season, but Rudolph now appears to be a healthy pass-catching option capable of carrying some preseason chemistry with Teddy Bridgewater over into Week One. My expectations are sky high for Rudolph this season, as I see him as the best safety blanket and red zone target, and would not be surprised to see Rudolph running routes designed to test that weakened linebacker group the Niners are now fielding. Predicting a first touchdown is a fickle thing (heck, it could end up being a defender for all we know) dependent on a ton of unknowns, but I’ll go ahead and plant my Rudolph flag from the get-go. Why not?

Brent: Adrian Peterson
I see no better way for the Vikings to kick off the season and put 2014 behind them than letting Peterson pound his way through the 49er defense for six. Aside for letting bygones be bygones, it would be wise of the Vikings to establish a strong running game early and often to keep some pressure off Teddy Bridgewater and open the field for downfield passing later in the game/season.

Lindsey: Charles Johnson
I’ve gone back and forth between Johnson and Mike Wallace, but I do think a receiver will snag the first touchdown. I loved the way Johnson finished up the 2014 season, and I expect him to pick up where he left off and really play a big role in the Vikings’ receiving game this year. It’s possible Minnesota will go with the running game early on and hand the ball to Peterson for the six-point play, but it will be equally important to get Teddy Bridgewater feeling confident in the passing zone right away, and the Vikings will want to make a statement with their second-year quarterback and the WR options he has this year. My assumption is that Wallace will be more heavily protected, so I’m predicting that Johnson will come out of the shadows for a big play.

Andy: Everson Griffen
Vikings win the toss, defer (like a boss), Niners get the ball first in those stupid black alternate uniforms (STOP MESSING WITH CLASSIC LOOKS.) After a Colin Kaepernick incomplete pass to JJ Stokes and a botched Kaep-Carlos Hyde read option monstrosity blown up by Anthony Barr, San Francisco is facing a 3rd-and-12 from its own 17-yard line. Kaepernick in the shotgun with the remnants of Reggie Bush to his left. Anquan “AARP” Boldin and Quinton Patton wide left, Torrey Smith wide right with Vernon Davis in the slot… Whoops, he just retired too…. Vance McDonald slot right. Vikings line up in the Nascar Nickel with B-Rob at defensive tackle and Danielle Hunter at left defensive end. Kaep takes the snap. Vikings rush five. Kaepernick flushed out of the pocket to the right. Torrey is blanketed by Newman. Rhodes are closed for Boldin. Patton is wide open on Captain, but Kaep didn’t get to him because he’s the third progression *snap*. Vance McDonald is Vance McDonald. #7’s running out of real estate being shadowed by Kendricks, and BOOM. Sharrif Floyd gator chops the ball loose from the Wolfpack prodigy. Everson in pursuit from the right side scoops it up and returns it up the left side (the actual correct direction of a fumble return in San Francisco for a change, sorry Jim Marshall) for the first score of the 2015 Minnesota Fightin’ Vikings season. It remains 6-0 though because Blair Walsh shanks the extra point to Palo Alto.
THE END

Austin: Xavier Rhodes
On Wednesday, Rhodes told reporters that the 49ers’ starting receivers, Anquan Boldin and Torrey Smith, are “fast guys, good guys, physical guys, guys that can get open.” That may be true, but I look at the quarterback throwing those two the football — Colin Kaepernick. If the Vikings, specifically Everson Griffen, can force Kaepernick to throw from the pocket, I expect San Francisco’s up-and-down quarterback to throw an interception or two. As he did so many times against the Seahawks and Richard Sherman, Kaepernick will likely challenge Xavier Rhodes, which is never a good idea. For the first time in his career, Rhodes will pick a ball off and return it for a touchdown, kicking off the Vikings’ 2015 season with a bang.

Carl: Cordarrelle Patterson
As much as I’ve been banging the drum to trade Flash, he is without question my pick to take an early kickoff 100-plus yards to the house. The 49ers ranked 24th last season in touchback percentage. 40-year old kicker Phil Dawson (43.8% touchback percentage in 2014) might have a hard time retaining his kickoff duties from rookie punter Bradley Pinion. At Clemson last season, Pinion notched a touchback percentage of 51. Either way, odds are Patterson might get a good look right out of the gate. Patterson has fresh legs right now, so it will be interesting to see if the Niners choose to kick deep. No question, the Vikings should win the field position battle in San Francisco.