VT Question of the Week: Which Vikings Play has been Your Favorite this Season? 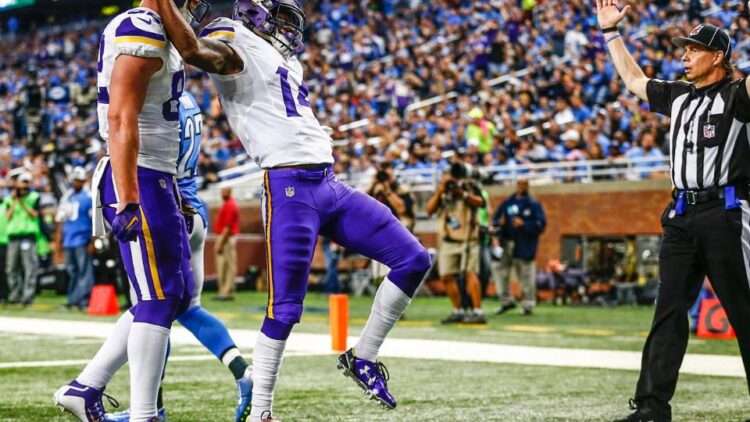 Adam: Chad Greenway’s 91-yard interception return
It isn’t like other plays didn’t spring to mind, especially Stefon Diggs’ recent awesomeness in Detroit, but I have to go with Chad Greenway’s 91-yard interception return for a touchdown, which sparked a victory against San Diego. Not only was I happy to see Greenway get one more Grade-A highlight reel addition before his career in Minnesota ends, but I loved the team effort and excitement that helped him get there. It wasn’t as flashy as a number of other plays we’ve seen this year, but so far it is certainly my favorite.

Carl: Stefon Diggs’ TD reception in Detroit
The rookie receiver dazzled again on Sunday against the Lions with his lightning-quick breaks and sharp route running. The Vikings wideouts have only caught two touchdowns through six games, making Diggs’ scoring effort all the more appealing. Diggs completely froze 13-year veteran cornerback Rashean Mathis on a strikingly handsome double move and topped it off by laying out over the goal line to secure a ridiculous 36-yard diving reception.

Andy: Stefon Diggs’ TD reception in Detroit
It might be a sweep and part recency bias/shiny new toy syndrome, but I don’t care. Stefon Diggs’ diving touchdown catch Sunday at Detroit was one of the best plays in recent Vikings history. Now I’m not one who yells or exclaims during games, but when Diggs hauled in Teddy’s slight overthrow I let out an audible “Ohhhhhhhhhhhhhhh.” It was amazing concentration and athleticism to be able to bring that ball in, and more than that, the double-move he put on Rashean Mathis to get that wide-open was a big-time NFL route. There’s a reason former players (and especially receivers) are raving about this kid’s route running and his ability to sell and get through his routes without losing speed. All Vikings fans should cross their fingers and hope #14 stays healthy. I think he and Teddy have a little something-something cooking.Lindsey: Chad Greenway’s 91-yard interception return
Greenway has been my favorite member of the Vikings’ roster for quite some time, and this year with his snaps and overall role [understandably] decreased, it was great to see the veteran not only snag an interception but rumble it down the sidelines 91 yards for six points. The story we all heard after the game, about his grandfather being at the game and getting the keep the game ball, just made the moment that much sweeter. For both football and sentimental reasons, I have to go with Greenway for my top play thus far.
Austin: Chad Greenway’s 91-yard interception return

I was close to picking Stefon Diggs’s latest touchdown, or Adrian Peterson’s run against the Chargers, but my favorite play of the year came on the defensive side of the ball. Specifically, Chad Greenway’s interception return for a touchdown that sealed a Vikings win over the Chargers in Week 3. It wasn’t necessarily the most important play of the year or the most exciting, but it told me everything I need to know about this roster. As I watched Greenway run up the sideline, surrounded by his teammates and cheered on by the coaching staff, I realized how connected this roster is at every level. Greenway’s the veteran leader of the defense, and though his playing time has been reduced, he’s still able to contribute in a meaningful way on the field. To see players young and old cheer him on that day was to see a team come together with one common goal — to reach the playoffs in any way possible.

Brett: Stefon Diggs’ TD reception in Detroit
My favorite play has to be the Stefon Diggs touchdown catch vs the Lions. I thought about this long and hard and was hoping to avoid the obvious answer, but frankly that was the most impressive offensive play that we’ve seen in 2015. Watching his Vikings teammates mob Diggs on the sideline after the play, it was almost this weight that was lifted from their shoulders. As if they were waiting for a wide receiver to make a play to help their 2nd-year quarterback. The trust that Bridgewater has shown in Digg’s ability to go up and get the ball on tough throws, and the Vikings have been looking for that kind of receiver for a long time; the amount of confidence it will give a quarterback is invaluable.