VT Question of the Week: Which 3 NFL Running Backs Will Have the Best 2015 Season? 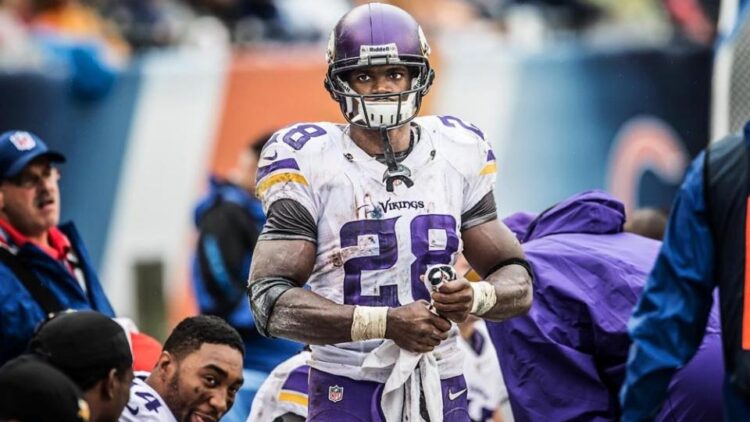 Please rank the players in the order you think they will finish.

Adam:
1. Adrian Peterson
Here’s a homer pick for you, and I’m okay with that. The last time I doubted Peterson, he shocked us all with his improbable return from injury and put up one historic performance after another. This year, after sitting out for a season by force and wanting to prove himself worthy of another contract extension, I would be terrified to be lined up across from him.

2. Eddie Lacy
This guy is a monster within an offense that isn’t even the primary threat within his own offense. Lacy’s talent and style of play, combined with a potent offense that can give him endless opportunities, makes him very dangerous at any point in any game. I wouldn’t be surprised to see him score twenty touchdowns in 2015.

3. Jamaal Charles
With the ability to be the most productive running back in the NFL, both as a rusher and pass catcher, Charles only has his team and coaches to worry about holding him back. That may end up happening, but I wouldn’t bet against Charles as an individual performer no matter which team he’s playing for.

Andy:
1. Jamaal Charles
Charles is getting older, but he is still the entire Kansas City Chiefs offense. Hopefully Andy Reid won’t forget he has No. 25 on the roster this season like The Walrus (coo-coo-ka-choo) did for stretches last season.

2. Adrian Peterson
Adrian will run angry, but won’t be the clear #1 fantasy threat like he has been in previous seasons due to the presence of a competent quarterback in Teddy Dave Bridgewater and a young, intriguing, change-of-pace back in Jerick McKinnon behind him. He’s still at No. 2, though, since he’ll absorb every goal-line touch. (RIP Asiata)

3. Eddie Lacy
Sadly, Lacy is No. 3 because he’s in a great offense and a true third-down back since he stepped up his receiving game last season.

I realize this seems strange seeing that my very first piece for Vikings Territory was about how Peterson was no longer the best running back in the game, but that has changed for two major reasons. First being that Peterson is coming off a year of rest and is more than ready to remind the NFL how dangerous he is as an offensive threat. Secondly, Peterson has the best offense suited for running back success, in my opinion. With an up-and-coming quarterback in Bridgewater throwing to a wide receiver who is known to stretch the field, Peterson should have more opportunities to run against defenses who will be stretched fairly thin. I picked both Charles and McCoy mostly because they are “do it all” backs who will get plenty of chances to make an impact with the ball in their hands. I’d feel much more confident in their production if either team had a passing game that commanded more respect from defenses, but I don’t see it that way. McCoy will run against a lot of stacked boxes and Rex Ryan’s strategy won’t call for a lot of “air it out” passing plays. Charles will have the luxury of Jeremy Maclin joining the Chiefs in the off season, but I’m not sure it’s enough to alleviate the attention on Charles.

Tear me down now. Call out the mobs. Grab your pitchforks. I actually have Eddie Lacy on this list. It’s hard to keep him off of it, though. No matter the allegiance, Lacy has been one of the most productive running backs in the league, and I expect that to continue in 2015 after another strong offseason from our rivals in the NFC North. Aaron Rodgers is still the league’s best quarterback (Teddy coming!), the receivers are still intact, and McCarthy will look to bring balance to the offense. Lacy will thrive, but he’s still behind “Purple Jesus,” Adrian Peterson. With fresh legs, Peterson will make a nasty return to the field and dominate in Turner’s offensive system. If there were every a scheme tailored to Peterson, it was this, and the talent around him will create opportunities, even against 8-man fronts. In Minnesota, defenses will finally have to respect the passing game, and Norv can create some variety with Patterson taking handoffs out of the backfield. If there’s one downside, it’s that McKinnon will likely get touches on third down, a luxury the Packers and Seahawks don’t employ as often. And finally, Lynch, who was spurned on the one-yard line in the Super Bowl, rounds out the list. He’s still Beast Mode, and Seattle still relies heavily on the run. Enough said.

Lindsey:
1. Eddie Lacy
As much as it pains me to put a Packer at the top of my list, it’s impossible to ignore Lacy heading into this season. The RB had an impressive performance last year, and I think he’ll be even more powerful this season with Adrian Peterson back on the field and in the same division; in all honesty, I think the competition between the two will spur them both on. Lacy is only 25 years old, so he has that going for him, and Green Bay’s offense isn’t getting any worse with Aaron Rodgers at the helm. Lacy showed how effective he can be as a third-down running back last season, and this year I expect him to be even more efficient.

2. Adrian Peterson
I honestly hope I’m wrong with my predictions, here. I hope AP finishes the season way ahead of Lacy, but I at this point I’m still a skeptic and can’t put Peterson at No. 1. I do, however, expect him to have a powerful season. A few months back I worried that Peterson might give us the Randy Moss “I’ll play when I want to play” attitude if he stayed in Minnesota, but now that I’ve seen him return to practice, I think it may be just the opposite. No matter what his feelings were about staying with the Vikings, it goes against everything in Peterson’s grain to not give 110 percent; this year specifically, expect him to play with a chip on his shoulder and seek to show the entire league that he still has plenty of gas in the tank. With Teddy Bridgewater entering his sophomore year and hopefully taking a little of the pressure off Peterson, there is recipe for success.

3. Jamaal Charles
I had a hard time picking between Charles and Marshawn Lynch for No. 3, because it’s hard for me to not put Beastmode in the top rankings. However, I think Charles will have the more productive season simply because he basically makes up Kansas City’s offense. Seattle has so many offensive weapons that the wealth is spread out, but for Andy Reid and the Chiefs, Charles is their go-to guy.