VT Question of the Week: What was the Vikings’ Biggest Play on Sunday? 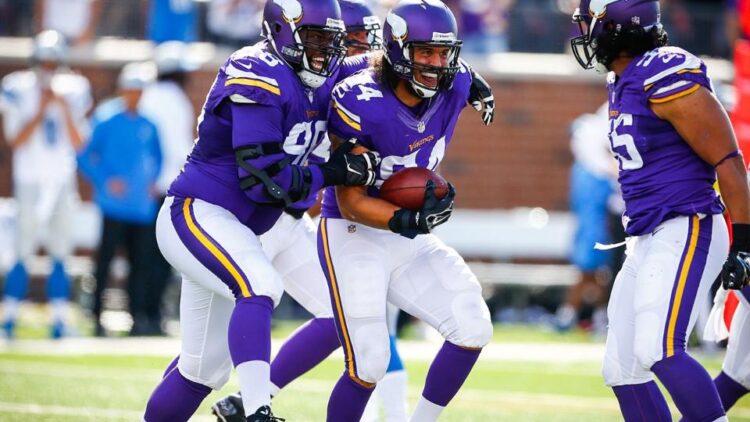 Carl: Justin Trattou’s interception
The 27 year-old undrafted four-year veteran from Florida only has one tackle in the stats column this season for the Vikings. The backup defensive end has played a whopping six total snaps, all verse the Lions in week two. Believe it or not though, he stands alone atop they Vikings’ leader board in the interceptions category. Maybe he was just in the right place at the right time, but his fourth quarter pick with just over 12 minutes to play gets my vote for biggest play of the game. With the Vikings up by 13, Stafford targets Eric Ebron in the left flat on a 1st-and-10 from midfield. Trattou didn’t rush the passer, nor did he drop back into coverage. With help from Andrew Sendejo covering the tight end, Trattou was able to simple slid into Stafford’s throwing lane and get his hands up in the air. I’m not sure how he made the catch, but his INT and 11 yard return was huge as it deflated the Lions while setting up the Vikings final scoring drive.

Austin: Adrian Peterson’s first quarter run
The biggest play for the Vikings came early in their Week 2 victory over the Detroit Lions. After a game in which he rushed for fewer than 50 yards, Adrian Peterson took the handoff on 1st and 10 from Detroit’s 45-yard line with 13:17 remaining in the first quarter, silencing doubters en route to a 25-yard run. The play established the Vikings’ dominance in the trenches while giving Peterson an opportunity to show off his signature speed, physicality, and home run ability on the Vikings’ first offensive series. While not as impactful as the Vikings’ two forced fumbles or Justin Trattou’s interception, the run along the right sideline dictated Norv Turner’s game plan for a win — feed Adrian Peterson.

Lindsey: Third down conversion to Jarius Wright
While Trattou’s interception was a huge play of the game, I thought the Vikings first established a sense of control over Detroit when Teddy Bridgewater was able to make a 17-yard play to Jarius Wright in order to keep their first offensive drive alive and eventually end in a Kyle Rudolph touchdown. Minnesota’s conversion on third downs Sunday was impressive, as Bridgewater succeeded on 50 percent of third-down attempts. Bridgewater’s pass is confident and effective, and Wright does an excellent job of running his route and snagging the reception for a first down.

Adam: Justin Trattou’s interception
It has to be Justin Trattou’s interception, without a doubt. Although astute Vikings fans know that Trattou isn’t without his merits, the snap count odds of him being the one to produce the team’s first interception were very low, but that is exactly what he did against the Detroit Lions on Sunday afternoon. Showing excellent coordination and awareness, Trattou disrupted a Matt Stafford pass intended for the tight end and then snagged it out of the air to pretty much solidify the team’s victory in the fourth quarter. It was a killer instinct type of play that we desperately wanted to see from this defense and Trattou now enters Week Three as the team’s leader in interceptions… something that should bother this secondary to no end.