VT Question of the Week: Will Mike Wallace be with the Vikings Next Season? 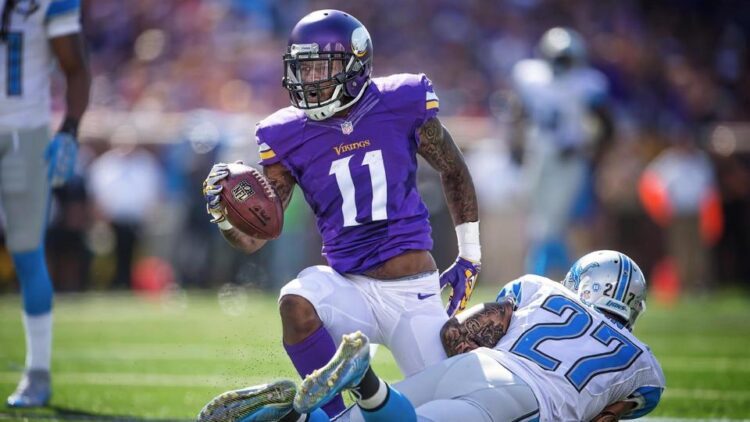 Lindsey: YES
I suppose this question is more complex than it looks on the surface, for two reasons: (1) we’re only four games into the season, and (2) there is Wallace’s contract to consider. However, I see no reason why the Vikings will be ready to part ways with him after a year. Against the Broncos, we caught glimpses of what could be a great connection between Teddy Bridgewater and Wallace—I’m hoping to see that continue over the next several weeks. Wallace was brought in as a deep threat, and we haven’t seen him utilized that way yet; that being said, we haven’t really seen Bridgwater throw deep to anyone yet. I’ll be the first to admit that I wasn’t completely thrilled about the move to bring Wallace to Minnesota, mostly because of the buzz we’d all heard about his attitude issues. However, the receiver has appeared to be a great personality to media, fans and teammates alike since joining the Vikings, and I think (at least for now) he’s happy with being here. The only thing I could really see happening for 2016 is a restructured contract if Wallace doesn’t end up with higher production by the end of the 2015 season. But, as I’m sure my fellow writers will also say, it’s still a big early to predict.

Carl: YES
I think he’ll be back. I realize it was four games into the season before Mike Wallace caught his first touchdown pass from Teddy Bridgewater, but his eight receptions for 83 yards and a TD against the Broncos is good sign of what might be to come. I like the fact that he is trying to develop into something more that just a deep threat. If I’m not mistaken, Wallace is under contract through the 2017 season, and the Vikings don’t have anyone lined up at the moment to take his job. He has had five consecutive season of 60 or more receptions, and I think he extends that streak again this season.

Austin: YES
In just four games, Mike Wallace has established himself as Teddy Bridgewater’s favorite—and most reliable—target. If we were analyzing this situation from a football perspective, I’d have no doubt that Wallace would be back next season. Reports of his attitude issues haven’t come to fruition in Minnesota, and if anything, he’s been a model citizen with the Vikings from the moment he set foot on team headquarters in Winter Park. But if we approach this with Wallace’s contract in mind, the question becomes much harder to answer. Although his guaranteed money expires at the end of this season, Wallace is set to make $11.45 million in 2016 and 2017 — a hefty price for a receiver whose numbers don’t reflect his current contract. Where does that leave us? I believe Wallace will definitely return next season, but with a restructured contract. He didn’t want to restructure with the Dolphins, but this is a different situation. He’s happy, leading the team in receptions and yards, and comfortable on a team that is built to compete for years. Bringing Wallace back is a win-win for all parties involved.

Adam: YES
With only four games of Wallace being a Viking, and only four games of 2015 football, it is nearly impossible to answer this question with any real certainty. With that being said, I don’t think the Vikings will have any interest in moving on from Wallace in 2016. Finding a better wide out and demoting him to No. 2? Sure. Approaching him about possibly restructuring his bloated contract? Okay. But flat out parting ways with him seems unlikely. We’ve heard it a million times: You need a deep threat to spread the defense out. Getting rid of ours after just one season would be a bitter pill to swallow, and efforts would be better spent on shoring up the offensive line to allow for more deep passes to occur. I think Wallace stays in 2016 (but reserve the right to change my mind between now and then).