Poll of the Week: Throw the Ball to Adrian Peterson 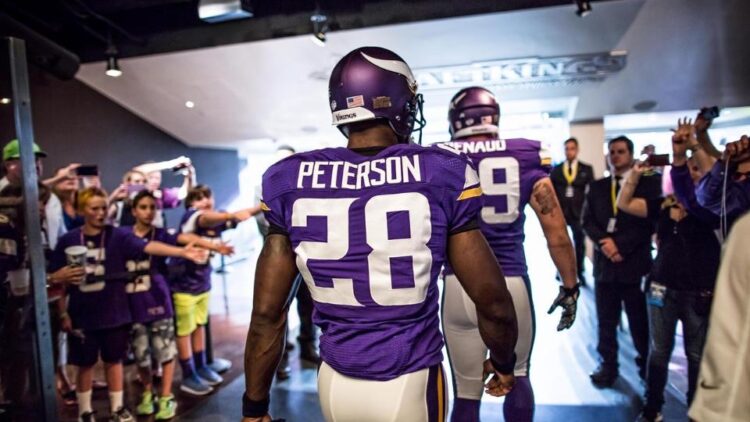 When reporters asked Mike Wallace Tuesday if he’s curious to see Adrian Peterson play, Vikings fans knew what the receiver would say long before he had a chance to answer the question — of course! Given the fact that the Vikings are averaging a meager three yards per carry this preseason, Peterson’s return to the backfield is long overdue. On September 14th, he’ll make his first appearance on the field since rushing for 75 yards in Week One last season. Regardless of the team’s struggles early on, offensive coordinator Norv Turner is optimistic and nearly as excited as Wallace to see No. 28 suit up against the 49ers:

“We’re going to be a good running football team,” Turner said on Tuesday. “We developed into a pretty good running team last year and obviously we’re anxious to get [Adrian] Peterson back.”

No one doubts Peterson’s rushing abilities — he’s averaged five yards per carry over his career, rushed for more than 10,000 yards, and has scored almost 90 touchdowns on the ground in eight seasons. At 30 years old, Peterson’s hit the proverbial “running back wall,” but who expects Peterson to do anything but crash through that wall this year? He’s in the best shape of his life, which is scary considering he broke the 2,000-yard mark in 2012 a year after tearing his ACL.

Don’t be surprised if Peterson carries the ball more than 300 times in 2015. In each of the seasons where he played all 16 games (2008, 2009, 2012), Peterson eclipsed that number and was projected to do so in 2013, when he carried the ball 279 times through 14 games. Matt Asiata and Jerick McKinnon will get their touches, but Peterson is the workhorse of the group — if he stays healthy, he’ll easily rush for more than 1,200 yards.

I have one request, though. Please, please get Adrian Peterson involved in the passing game. Knowing Norv Turner’s history calling offenses, that should happen this season. But how often will Teddy Bridgewater and Adrian Peterson connect? Let’s find out.

In his eight seasons, Peterson has never caught more than 43 balls and has never scored more than one touchdown through the air. Whether he was operating in Bull Musgrave’s offense or Darrell Bevell’s, Peterson has never been utilized as a pass-catching threat. With Norv Turner, that could all change. In an interview with KFAN before the start of the 2014 season, Turner said he expected Peterson to catch “50 or 60 balls” in his offense, and those plans shouldn’t change given the depth of talent on offense moving forward.

Looking at running backs in Norv Turner’s system, a minimum of 40 receptions should be expected per year: Save for Emmitt Smith in 1993 and the duo of Asiata and McKinnon in 2014, Turner’s backs have always rushed the ball more than 300 times. And only twice have his running backs caught less than 50 balls — Emmitt Smith in 1991 and Ricky Williams in 2002. The statistical evidence supports the idea that Turner wants Peterson to catch 50 or 60 balls this season and become an integral part of Teddy Bridgewater’s growth.

This preseason, we’ve seen both Asiata and McKinnon catch screens, dump-offs, and swing passes out of the backfield, and those are plays Peterson is fully capable of making once the regular season begins. Bridgewater has been careful with the football this preseason and rarely forces the football down the field if he’s given better options in the flat or underneath the coverage. Why not put the ball in your best player’s hands if that’s the case?

Given the statistics and Peterson’s receiving history in the league, I expect the Vikings running back to finish this season with somewhere around 45 receptions, 330 yards, and 2 touchdowns. With McKinnon expected to steal some touches on third down, it may be difficult for Peterson to eclipse 50 catches. Another factor to consider — the addition of Mike Wallace, who may warrant more deep shots down the field. This much talent on offense, from Charles Johnson to Kyle Rudolph, means the Vikings have a lot of mouths to feed. How much will Peterson eat this season?

How many receptions will Adrian Peterson have in 2015?