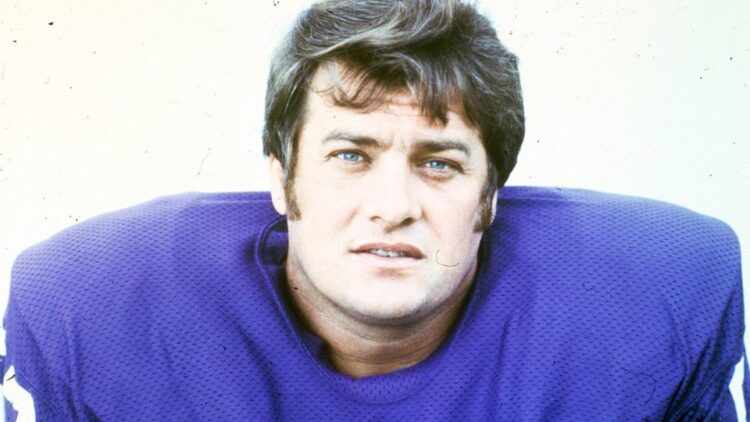 If you’ve ever strapped on a helmet and shoulder pads, you know how violent football can be. From pancake blocks to open field collisions, its a sport that requires a certain toughness, and honestly, a certain level of recklessness. This is especially true for offensive and defensive linemen, who repeatedly crash headfirst into one another like trucks in a demolition derby.

In today’s league, the passing game and up-tempo offense are at a premium, but that doesn’t make the action in the trenches any less violent. Pull up any highlight reel on Youtube, try to ignore the flashy skill players, and fix your eyes on the battle of the “big uglies” — they punch,  dive, drive, and rip while slamming into a wall of muscle and aggression.

With all that violence, it’s highly unlikely a player lines up for every offensive snap. Injuries are a part of the game, and they have a nasty habit of ruining single plays, multiple seasons, or even careers.

Earlier this year,  MickTingelhoff was announced as the 13th Minnesota Viking to earn a place in the Pro Football Hall of Fame. He’ll be inducted with Jerome Bettis, Tim Brown, Charles Haley, Bill Polian, Junior Seau, Will Shields and Ron Wolf as part of the Hall’s annual ceremony on August 8, 2015 in Canton, Ohio.

A few of those names stand out for their measurable accomplishments on the field, like Tim Brown and his 100 receiving touchdowns or Charles Haley and his 11 postseason sacks. We can see the impact they had on the field and judge them on the hard numbers, making it tougher for players like Tingelhoff to stand out in the eyes of the Senior Selection Committee.

But ask any player, like former Vikings great Fran Tarkenton, what Tingelhoff brought to the team, and they’ll make his case for induction abundantly clear:

The 6’2″, 237-pound Tingelhoff would be tiny by today’s NFL standards, but between 1962 and 1978, enjoyed one of the greatest runs at the position in NFL history. As Arif wrote in January, Tingelhoff “was considered the best center in either league at cutting off the middle linebacker on runs” and “played with surprising quickness for quite some time in his career.”

As the anchor of the offensive line for 17 seasons, Tingelhoff led the Vikings to 10 division titles from 1968 to 1978, appeared in 19 playoff games, and started in four Super Bowls — though we know how those ended for the Vikings.

Nonetheless, he made a name for himself as one of the Vikings’ most influential players under Bud Grant, who coached the team from 1967 to 1983 (and then again in 1985). As Arif pointed out, “Tingelhoff was a captain every year Bud Grant was with him and was considered not just a team leader, but an invaluable help on the practice field.”

Those offenses truly took off when Tarkenton was taking snaps from Tingelhoff. They played together for 12 seasons, and their relationship helped make Tarkenton the most prolific passer in NFL history at the time of his retirement. In Tingelhoff’s final season, Tarkenton became the Vikings’ first 3,000-yard passer, throwing for 3,468 yards in 1978. Tarkenton trusted Tingelhoff so much that he even made his center an option in the passing game. Per Pro Football Daly, one of their most memorable plays together came on November 7, 1965 at Metropolitan Stadium. Always a threat to scramble, Tarkenton found himself cornered by the Rams’ ferocious defensive line and desperately heaved the ball to Tingelhoff:

[quote_box_center]From the Los Angeles 12-yard line, Tarkenton looked for pass receivers, then scrambled up the middle. Around the 5-yard line, he met solid resistance, so he tossed the ball backward two or three yards to Tingelhoff, the Viking[s] center.

Surrounded by Rams and convinced he was neither paid to take the lumps of a ball carrier nor likely to get anyplace, Tingelhoff quickly followed suit and pitched the hot pigskin to fullback Bill Brown. Brown had nothing to do but sprint 11 yards toward the corner of the end zone to score standing up.[/quote_box_center]

Tingelhoff’s illustrious career is not only defined by his accomplishments and accolades, but by his humble beginnings. He started every game he ever played for the Vikings, even though he was just “a farm kid from Nebraska”. As a free agent in the 1962 NFL Draft, “no one in the professional ranks thought he [Tingelhoff] was a good enough player” to succeed at the game’s highest level, per Jim Bruton’s 50 Greatest Vikings.

A visit from then head coach Norm Van Brocklin changed that, and the Minnesota Vikings signed him to the roster. From there on out, the rest was history, and a nobody turned himself into one of the franchise’s greatest linemen of all time.

As Tough As They Come

[quote_center]”Mick Tingelhoff was as tough a player as any who ever played. If I gathered every football player that I knew or played with in my life and put them all in a room with the instructions to fight their way out, I would put my money on Mick to get there first.”[/quote_center]

Fran Tarkenton used these words to describe Tingelhoff for Bruton’s book, and he’s not the only Viking to marvel at the soon-to-be Hall-of-Famer’s incredible grit and ferocity. As Bud Grant wrote in his autobiography, I Did it My Way, Tingelhoff was more than a center, he was a true football player:

In any era of the National Football League, middle linebacker is considered THE most violent position on the field. When Tingelhoff was at the center of the offense, middle linebackers like Joe Schmidt of the Detroit Lions, Ray Nitschke of the Green Bay Packers, and the Chicago Bears’ Dick Butkus roamed opposing defensive units.

If that weren’t enough, Tingelhoff played through countless injuries, even starting games where he was “so battered” that he shouldn’t have even suited up. Tingelhoff was truly a warrior, and the stories of his strength on the field were endless. Sid Hartman, a legend in Minnesota’s newspaper industry and longtime Star Tribune reporter, remembers Vince Lombardi’s adoration for Tingelhoff. “That number 53 played one of the greatest games I’ve ever witnessed a center play,” Lombardi told Hartman after a Vikings victory. Little did Lombardi know, but Tingelhoff played the entire game injured.

With a torn muscle.

Longtime Vikings trainer Fred Zamberletti confirmed Hartman’s story, reminiscing on the gruesome injury. “I remember once he tore a [leg] muscle,” Zamberletti said. “We taped him all the way from his toes to his buttocks, and he played every play against Green Bay.”

Zamberletti also recounted another of Tingelhoff’s remarkable recoveries. “I remember another time, he had a separated shoulder,” he said. “The doctor said there was no way he could play, but somehow he had a miraculous recovery and played Sunday.”

Maybe Tingelhoff’s resiliency is an inherent trait, or maybe it developed as he grew up on a small farm in Nebraska. There, he had to walk a mile and a half to school every day, then come home to milk the cows by hand, long before milking machines were invented. Life wasn’t easy, and his going undrafted was another obstacle — one that Tingelhoff easily hurdled.

The 32-year Wait is Over

The Hall of Fame enshrinement ceremony is just 34 days away, which is nothing to Tingelhoff, who has waited 32 years for this moment. After one of the most prolific careers at center in NFL history, Tingelhoff will finally have his chance to shine. And the man he snapped the ball to for so many years will be sending Tingelhoff into eternal football greatness.

[quote_center]”It will be my pleasure,” said Tarkenton. “I’ve never been back there since ’86. I’m going back for the first time in a lot of years. I want to be there. Nobody knows him better.”[/quote_center]

According to Chris Tomasson of the Pioneer Press, 140 to 150 friends and relatives will be at the ceremony in early August, and current Vikings players will have an opportunity to watch the induction in-person. The next day, they’ll take on the Steelers in the Hall of Fame Game, where Bud Grant, Tarkenton, Tingelhoff, and other former Vikings will be watching.

He may have started 240 consecutive games for the Minnesota Vikings, but that streak will never match the one he’ll start on August 8th — a lifetime in the Pro Football Hall of Fame.

Congratulations, Mick. Here’s to a career I wish I had witnessed and 17 years of unforgettable football with the Vikings.