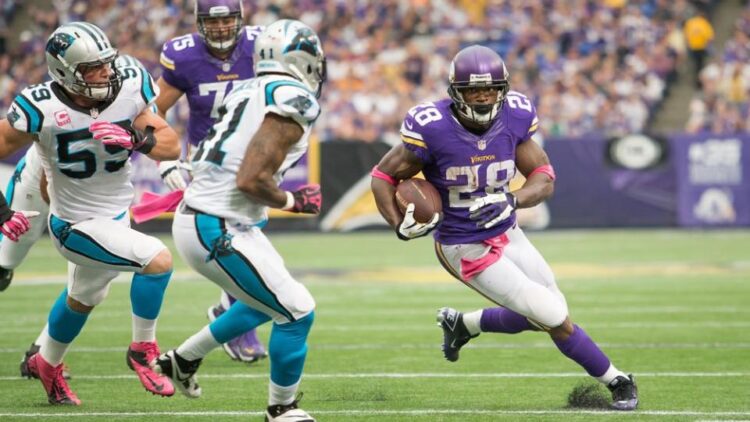 FURTHER UPDATE: The NFL has released a statement, the most important tidbit of which is that Adrian Peterson has been returned to the NFL Roster Exemption/Commissioner’s Permission List.

Judge Doty’s order did not contain any determinations concerning the fairness of the appeals process under the CBA, including the commissioner’s longstanding authority to appoint a designee to act as a hearing officer. Even so, we believe strongly that Judge Doty’s order is incorrect and fundamentally at odds with well-established legal precedent governing the district court’s role in reviewing arbitration decisions. As a result, we have filed a notice of appeal to have the ruling reviewed by the Eighth Circuit Court of Appeals. In the interim, Adrian Peterson will be returned to the Commissioner Exempt List pending further proceedings by appeals officer Harold Henderson or a determination by the Eighth Circuit Court.

It has been the NFL’s contention that the courts had no authority to review arbitration decisions and it sounds like they will use this argument once more in appeal. As far as I know, and this is an educated guess, the Vikings and Peterson cannot have contact with each other while he is on the Exempt List until the new league year, and he cannot be traded (until the new league year, I believe—the exempt list does not prevent a trade by itself).

Wrong again! According to Ben Goessling at ESPN, the Exempt List DOES allow a player and a team to communicate. This means all the analysis for why that matters (below) is applicable.

The Eighth Circuit Court holds court one week a year in mid-April, and rulings come out in late May and early June. No word yet on what it means for the NFL April 15 hearing on Adrian Peterson’s suspension, because… well, he’s not suspended anymore.

UPDATE: Per Ian Rapaport of the NFL Network, the NFL will appeal Judge Doty’s decision, presumably seeking an injunction while the case is settling in a District Court.

In important news, the @NFL is expected to appeal the Adrian Peterson ruling handed down by Judge Doty. Explanation coming online.

This does not preclude a second arbitration hearing “under the old policy,” though I suspect if it happened, the NFL would find a way to uphold their own ruling again. No word yet on whether or not the NFL will challenge both rulings (the retroactivity one and the one arguing Henderson had the authority to rule on the old policy as well) or just one.

As Andrew Brandt notes, courts are increasingly hesitant to overrule the rulings of an arbitrator, and that may include the ruling over what an arbitrator can rule over, as it were—meaning courts can defer to an arbitrator’s interpretation of their own scope of power, and increasingly do (as friends in the legal community have confirmed to me).

The Eighth District Court may rule that Judge Doty was correct in ruling against the NFL for punishing Peterson according to the old conduct policy but incorrect with regards to the arbitrator’s scope—that is, the District Court may argue Henderson’s ruling that Peterson’s suspension is upheld under the old policy still applies.

CONCLUSION Accordingly, IT IS HEREBY ORDERED that:

1. The petition to vacate arbitration award [ECF No. 2] is granted; and

2. The case is remanded for such further proceedings consistent with this order as the CBA may permit.

The Court found that the NFL violated the “essence of the CBA” by violating industrial common law and argued that the Ray Rice precedent was proof; the NFL’s attempt to distinguish the cases didn’t pass muster.

According to Doty, “Although Henderson purported to rely on factual differences between Rice and this case, he did not explain how those differences would justify a different result.” The arbitration is therefore vacated, although I’m not sure if this means Adrian Peterson is reinstated or whether or not this forces the NFL to reconsider the NFLPA’s appeal against his suspension (functionally retrying the case under the old policy). Regardless, this should mean that Peterson will be reinstated soon because his punishment exceeded the bounds of the old policy.

The NFLPA has said that Adrian Peterson’s suspension has been overturned, while the text of the ruling doesn’t seem as obvious to me.

EDIT: My intuition was correct—he has not been reinstated, the arbitration has been rebuked. Peterson’s and the NFLPA’s appeal of suspension with the NFL is active once more and it will be decided upon by the old policy.

The NFL released the following, five-word statement: “We are reviewing the decision.”

The NFLPA released the following statement:

“This is a victory for the rule of law, due process and fairness. Our collective bargaining agreement has rules for implementation of the personal conduct policy and when those rules are violated, our union always stands up to protect our players’ rights. This is yet another example why neutral arbitration is good for our players, good for the owners and good for our game.”

The NFL has legal recourse in this case and can file an appeal and can potentially seek an injunction on the stay of suspension granted by the court, functionally re-suspending him. That would take it up to the circuit court.

Though no players can be traded until the league year starts on March 10, the ruling as it stands currently clears a lot of things up for the Vikings as soon as the confusion (confusing on my end anyway) about his immediate or eventual reinstatement is resolved, the first of which is that every member of the team can contact Peterson (Ed. – as soon as the NFL rules once more), including head coach Mike Zimmer. As Ben Goessling at ESPN points out, that may go a long way to resolving the tension Peterson has with the team.

But if Peterson is unsure who he can trust, and uneasy about whether people will be honest with him, Zimmer’s words at least have the potential to cut through that.

“Coach Zimmer — I love that guy, even though I only played one game for him,” Peterson said on Thursday night. “Coach (Norv) Turner, Kirby (Wilson), the running backs coach, I have a lot of respect for those guys there. But it boils down to just my family and I being happy.”

It would ultimately be Zimmer, Turner, and Wilson who Peterson deals with on a daily basis, not ownership or the front office. Perhaps Zimmer can, at the very least, convince Peterson to sign up for one year of holy terror on the field, prove to everyone what kind of player he still is and move on from there. Perhaps Peterson’s concerns are too deep-seeded for that to work. But it’s clear the coach earned Peterson’s respect in their short time working together, and the Vikings should at least give Zimmer a chance to try.

It also means the Vikings can make a decision on Adrian Peterson (Ed – again, pending the NFL ruling once again), whether that means cutting, restructuring or agreeing to a trade in principle with another team. Actually being able to hold discussions with Peterson before the league year starts could be massive, because it means the Vikings can plan out an approach towards free agency with real numbers and an updated needs list in hand instead of the hope that Peterson restructures.

Cutting Adrian Peterson on April 15 won’t have a lot of value when the highest value free agent signings are done within a couple days of free agency’s open on March 10.

Those discussions with Peterson will also be critical to allowing him to talk with the teams he could be traded to or the Vikings if Peterson has requests or demands involved with the trade, or if those teams have the same—including a restructured contract.

No movement can be made on the Adrian Peterson front without the ability to talk to him, even if discussions with his agent would have been rosy—which evidently is not the case, given the heated exchange and physical altercation the Vikings Vice President of Player Personnel Rob Brzezinski had with agent Ben Dogra.

Clearing the air and clarifying what Peterson wants and needs will be a big step forward on concretizing his status with the team. It will also accelerate any negotiations with Peterson or other teams—teams may not pay as much or be too hesitant to pull the trigger if they are worried about Adrian Peterson’s hearing with the NFL on April 15.

It also means the Vikings can agree to a trade—although not concretely—before free agency opens and teams fill needs. After all, if a team signs Stevan Ridley or Shane Vereen in free agency they may not perceive the need that would drive a trade for Peterson even if he is a clear upgrade. By allowing trade discussions and agreements-in-principle to form, the Vikings can create a trade deal along with Peterson that will allow them to target teams that need a running back before they sign one in free agency.

Judge Doty ruled that Adrian Peterson’s suspension should not be applied because it he should not be punished ex post facto for a policy he did not violate at the time the act was committed, but did not rule, as the NFLPA contends, that Harold Henderson didn’t have authority as an arbitrator or was not an impartial arbitrator.

EDIT: As someone points out in the comments, my wording here was not very good or precise and the paragraph has been modified. Henderson overstepped his bounds by ruling on a separate grounds that was outside of his capacity to rule and therefore overstepped his boundary, but no judgment was made by Doty that stated Henderson does not have the general authority of an arbitrator.

Should the Vikings cut Adrian Peterson, which seems unlikely, they would save $13 million in cap space. They currently carry $20 million in space right now with no priority free agents to resign, according to OverTheCap.com. Trading Peterson would incur the same cap benefits.