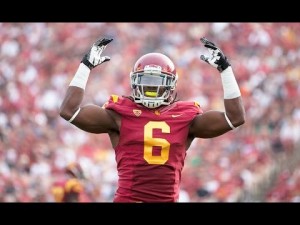 The cornerback class is quietly one of the deeper and more talented groups in this year’s NFL draft. At the top of the pack is Trae Waynes from Michigan State and Marcus Peters from Washington. From purely a talent standpoint, many people believe Peters is the better CB prospect yet red flag issues have hurt his draft stock. Waynes is a lanky press cover specialist who is consistently being projected and mocked in the neighborhood of the Vikings’ 11th over all pick.

Cornerback is widely believed to be an area of need for the Vikings, and I certainly suspect Rick Spielman and Mike Zimmer might look to draft more than one versatile defensive back again this year. Even if the Vikings select a corner in the first round, they could look to target a “sleeper” cornerback in the later rounds, who can also play safety.

My Sleeper Sunday pick this week goes to USC’s Josh Shaw. Shaw is a talented cornerback on the football field, but unfortunately he’s been overshadowed by his tall tale lie off the field which has turned his life upside down.

Heading into his senior season things fell apart when the Trojans’ defensive co-captain fabricated a story about saving his drowning nephew from a pool. The lie was an attempt to cover up the truth about hurting his ankles while jumping from a balcony after an argument with his long-time girlfriend.

His tale of heroism quickly turned into one of shame.

After internal investigations, and also serving a 10 game suspension, Shaw returned to play in the final three games and embark on the uphill battle of restoring his name and credibility.

Shaw has rebounded well by taking advantage of solid showings at all-star games and pre-draft workouts. At the East-West Shrine Game in St. Petersburg, Shaw was impressive in practice throughout the week and also intercepted a pass during the game. His outstanding effort earned him an invitation and an opportunity to play in the Senior Bowl. In Mobile, Alabama, Shaw stood out as one of the more physical corners in practices and proved he can play man-to-man with some of best receivers in the country.

Shaw has a muscled up frame with the experience and physicality to play safety. He shows excellent awareness, good flexibility with smooth hips to turn and run. With the NFL’s recent love affair with bigger corners, Shaw has the speed, footwork and change of direction ability to stay on the perimeter as a corner in the NFL.

Shaw is at his best when playing press man coverage. He excels at using his size, strength and length to jam a receiver at the line. Shaw typically shows natural ability to turn quickly and run with any receiver with little trouble. He can recognize run or pass quickly and is a willing tackler in run support who displays great closing speed.

Josh Shaw is a mid round gem that could be a star in the NFL at corner or safety under Mike Zimmer’s tutelage. If Shaw is still on the board when the Vikings are on the clock in the fourth round, I wouldn’t hesitate to flash my Rich Eisen like 40-speed to the podium and turn this pick in.