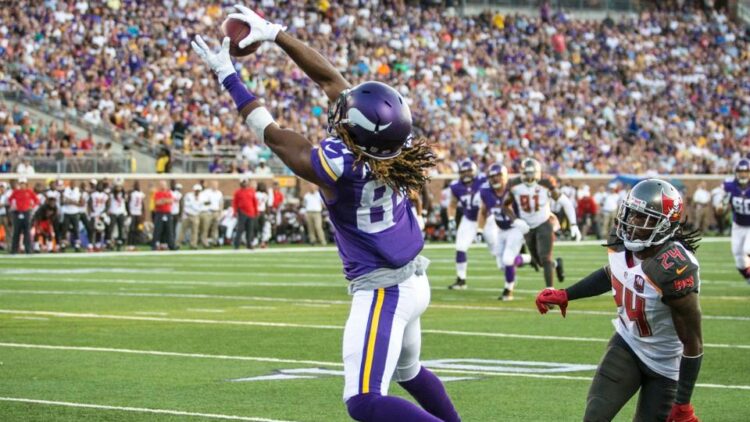 Bridgewater started the game off hot by hitting Kyle Rudolph for 18 yards on the first play from scrimmage. Two plays later he hit Jarius Wright for a 26 yard reception helping the Vikings get in position for a Blair Walsh 46 yard field goal that gave the Vikings an early 3-0 lead.

Bridgewater was 7/8 in the game for 86 yards and led the Vikings on a five play 38 yard scoring drive that ended with a Zach Line 1-yard touchdown run on the Vikings third possession.

Winston, the first pick in the 2015 NFL draft, played the entire first half and finished 9/19 for 131 yards. He had a pass intercepted by Antone Exum, mishandled two snaps that led to a total of 19 lost yards and several off target passes.

With the Vikings up 9-0 in the first quarter, Everson Griffen welcomed Winston to the NFL with a 9-yard sack on first-and-ten on Tampa Bay’s third possession. Winston played better in the second quarter, but the Vikings managed a 23-9 advantage heading into halftime thanks to a Shaun Hill’s 21-yard touchdown pass to Cordarrelle Patterson and a 15-yard touchdown strike to Adam Thielen.

Three fumbles by Vikings’ running backs and Phil Loadholt’s season ending injury on the second offensive play of the game put a damper on this preseason outing, but the over 50,000 fans at TFC Banks stadium certainly had plenty of highlights to enjoy especially from rookie favorites Eric Kendricks and Stepon Diggs. Kendricks was all over the field in the second half collecting five tackles and a big sack on third and seven late in the game. Diggs had two receptions for 26 yards, but it was his three punt returns for 54 yards that ignited the crowd.