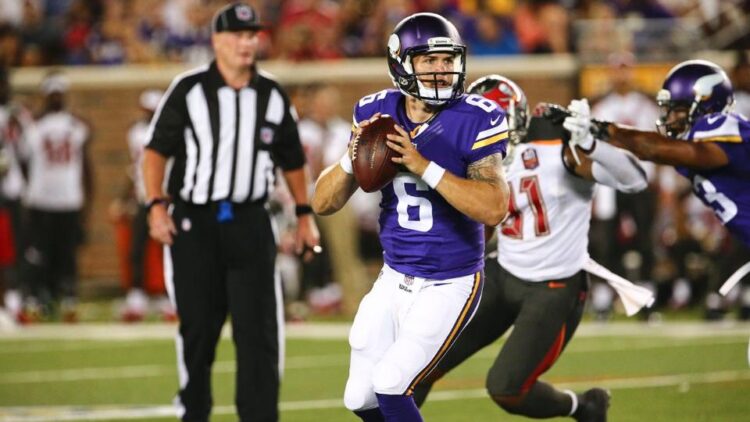 The Vikings announced Tuesday that they have waived QB Mike Kafka with an injury designation. The move drops Minnesota’s roster to 75 players, which means there are still plenty of cuts that will need to happen for the final 53-man list.

Waiving Kafka also leaves just three quarterbacks on the roster, but there’s been much speculation as to whether Minnesota will carry just two for the season.

“It’ll be interesting to see whether the Vikings keep three quarterbacks on the roster like they did last year, which I highly doubt [will] be the case.”

Since the NFL expanded the practice squad allotment from eight players to 10 last summer, teams have a little more leeway with how they use those slots. It wouldn’t be surprising if the Vikings keep just Teddy Bridgewater and Shaun Hill on the active roster and consider hanging onto Heinicke via the practice squad.

However, Heinicke hopes that’s not the case.

It’s probably safe to say that each preseason game has proved nerve-wracking for Heinicke, but now that Kafka is out of the picture, Thursday will be his last chance to make a case for the Vikings carrying a third quarterback.

One would expect Taylor Heinicke to play most, if not all, of Thursday’s game. He’ll be trying to convince the #Vikings to carry a third QB.

Heinicke is showing some real potential. His training camp performance had some definite rocky points, but the rookie’s game action has been fairly strong. Thus far, Heinicke has completed 30 of his 41 preseason pass attempts for 237 yards with one interception; against Dallas Saturday, Heinicke was 11-for-11. He’s looked a little more confident each game.

“The first snap against the Steelers, it was a little jittery,” Heinicke said. “I just wanted to get my first completion and get hit for the first time, and I think that happened both on one play. So I got that out of the way, and I’ve felt pretty good since.”

Heinicke said his dad taught him to focus on getting better each day and to not get overwhelmed or carried away by looking too far ahead.

He’s just taking it one game at a time.

Making the active roster would be the icing on the cake for Heinicke, who went undrafted in 2015 after graduating from Old Dominion. Although some may say playing for a small school—with a football program that didn’t even exist before Heinicke attended—would be a disadvantage. But for the young quarterback, he knows that playing for a smaller-market school gave him four years of game experience he probably would not have gotten elsewhere.

That game experience is paying off now.

Head coach Mike Zimmer hasn’t given any strong indication as to the team’s plans—or lack thereof—for a third quarterback, but he has acknowledged Heinicke’s progress.

“(Heinicke’s) still a young quarterback trying to find his way in a lot of things, but he made plays the other night, and he’s done a good job this camp,” Zimmer said recently. “So we’ll just have to see where everything unfolds.”

“Just getting a feel for playing and understanding the speed. He’s gotten a lot better with his feet, gotten the ball out quicker,” said Turner of Heinicke’s progress. “In the second half, the coverage isn’t as good, the defenses aren’t as sophisticated, but we can’t control that. But he’s made plays that show he’s got a chance to develop into a guy that could be on our roster.”

One knock against Heinicke has been his size. He’s listed at 6’1″, on the smaller side for an NFL quarterback, and plenty of critics have pointed that out.

The rookie doesn’t want to hear it.

When I asked Heinicke about the height critique at training camp, he chuckled and shook his head; his body language said, “I’ve heard this before; it’s not an issue.”

“Whenever I hear people say things like that, I just tell them to look at guys like Russell Wilson or Drew Brees,” Heinicke said. The two successful quarterbacks are listed at 5’11” and 6’0″, respectively.

Anyone will probably tell you that Taylor Heinicke is one of the kindest guys in the locker room. When it comes to the field, however, the rookie plays with a [healthy] chip on his shoulder. Maybe, at the end of the day, criticism has only helped drive Heinicke to prove people wrong. He wants to be part of the Minnesota Vikings, and it shows.

Come Thursday evening, no one will be more hungry for a big performance than Heinicke. After all, his career may depend on it.