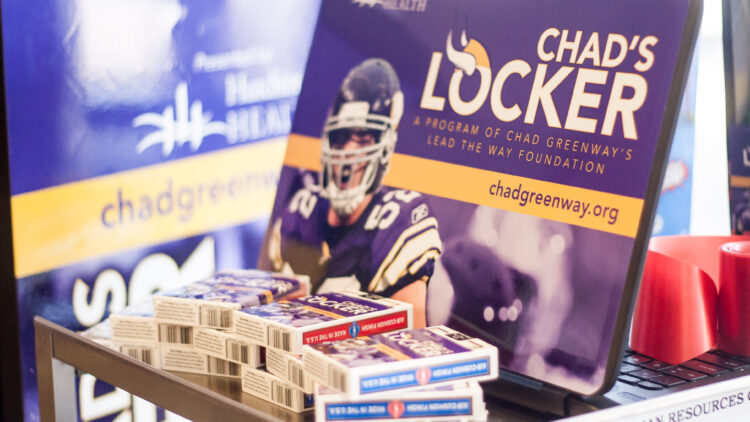 On Tuesday afternoon, Chad Greenway proudly introduced his seventh “Chad’s Locker,” this time at Hutchinson Health. The locker included kid-friendly electronics and games, providing an outlet for countless patients and families who come through the hospital on a weekly basis. Greenway said the following as an introduction to the latest locker installment:

[quote_box_center]”This is an honor. Clearly this is something that Hutchinson was ready for. There’s definitely a need, and we’re so excited to be here […]. The reason we love our locker so much is because we can put it in a place like this where a lot of times the family doesn’t necessarily want to be but has to be, and it’s our biggest chance to reach out and positively affect as many people as we can—kids, families, moms and dads. The goodies that are inside of there can go a long way to help any little bit that we can. Sometimes it’s just enough to throw on some cartoons on the iPad or do something like that to pass the time. It’s an honor for us to bring it here, and we’re certainly excited about that.” [/quote_box_center]

As you may remember, Vikings Territory collaborated with both readers and writers from fellow Vikings blogs and started the #MoreThanWords campaign to raise money for the Chad’s Locker program earlier this summer. By the end of the nine-month effort, #MoreThanWords raised nearly $5,200 for the worthwhile cause.

The money donated by Vikings fans all over the nation went directly to help fund additional lockers for the Twin Cities, and this one will certainly be well used at Hutchinson Health.

One individual who played a huge part in bringing a locker to Hutchinson shares a first name with the Vikings linebacker. Chad Harlander is the director of the REACH Program, which seeks to support students in finding academic and interpersonal success. REACH has partnered with Greenway to put on the annual Day to REACH football camps in Hutchinson, and it’s through this connection that Harlander saw an opportunity to further involve Greenway in the community.

“I knew Hutchinson Health would be a great opportunity to take what Chad and [his wife] Jenni are doing throughout the state and bring it here to Small Town, U.S.A.,” Harlander said. “A lot of the main lockers are in the big hospitals, but we’re excited to have him here.”

Greenway was met with a crowd of community members, kids, patients and staff from Hutchinson Health, and he waved and greeted everyone with that signature smile upon entering the hospital. True to his nature, though, he turned most of the credit to Harlander.

“The things that he’s doing are changing lives—he’s changing lives,” Greenway said of Harlander. “We learn a lot from him. He’s an awesome guy and a great person for this community. You guys should be very proud of him; I know I am. He’s a big reason why this is happening.”

Greenway and Harlander performed the ceremonial ribbon cutting together, and the linebacker then invited several children to open the locker and investigate its contents. Although timid at first, they slowly began to pull items out and became progressively more excited as they held up iPads, Nintendo DS’s, DVDs and even Barbie dolls.

“If there are people who need to stay at the hospital, we just want them to use the locker and let us know what else they need,” Greenway said. Following the event, Greenway lingered in the lobby to greet fans, sign photos and pose for pictures with kids, parents and staff members alike. Kristi Hanson, an R.N. in the surgery department, explained that the entire hospital had come together to make Tuesday’s event special for everyone involved.

“It’s fantastic for our community,” Hanson said. “We wore Vikings apparel, and we invited the community and our co-workers to come down and not only support Chad [Greenway] but Chad Harlander and also the locker itself to make a neat, exciting thing for our hospital.”

Hanson’s 10-year-old son Sam met Greenway for the third time at the locker opening, having attended two of his football camps previously. Wearing a bright yellow “Day to Reach” T-shirt, Hanson was all smiles when talking about the Vikings linebacker.

“He’s really fun and active with kids, and he’s really nice to everyone,” Hanson said. “All the kids at the hospital get a chance to play with the electronics so they’re not always bored, which is great.”

Greenway and his wife Jenni have served the Midwest community for years, and they have no intention of stopping. After today, they hope to continue installing lockers at hospitals as a way to have an impact on patients and families alike. Greenway smiled when asked about the program’s success thus far.

And he intends to keep it that way.