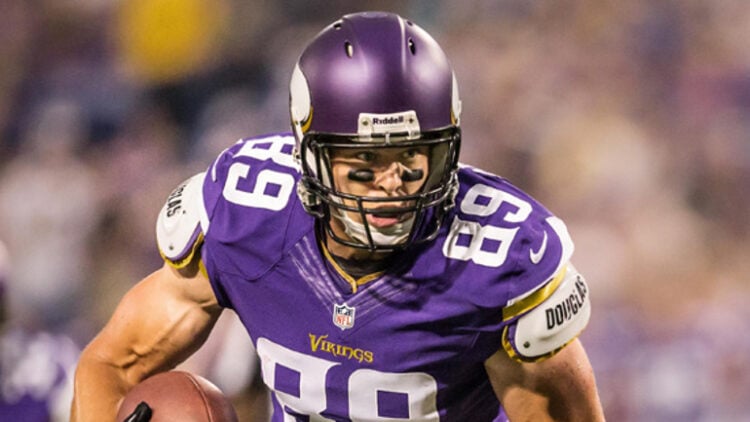 According to the NFL.com’s Conor Orr, former Minnesota Vikings tight end John Carlson announced his retirement from the NFL. Carlson is 30 years old.

[quote_box_center]After much thought and consideration, my wife Danielle and I know that this is best decision for us. I was blessed to play seven seasons in the NFL for three tremendous organizations — the Cardinals, Vikings and Seahawks. I will always treasure the experiences and relationships made during that time but I’m also very excited about the next phase of my life and what’s ahead.[/quote_box_center]

The Minnesota native and Litchfield High star excelled in Seattle during his first three years in the NFL, and he subsequently earned a five-year, $25 million contract with the Vikings. Carlson played two seasons with the Minnesota before being cut from the team and signing a deal with Arizona.

During his time in purple, Carlson played 27 games and had 40 catches for 387 yards and one touchdown.

Although the tight end did not cite a reason for his early retirement, it seems likely that concussions were a driving force behind his decision. Carlson suffered three reported concussions over his NFL career, and it cut his final season with the Vikings short. In March 2014, the Star Tribune posted this from Carlson when he decided to play another year:

Although he has not explicitly said so, it seems Carlson changed his mind about his health in regards to football.

In a recent feature I wrote for Fox Sports North, former Viking Sage Rosenfels expressed concern over the current state of the NFL and long-term effects of repeated head injury on players. Carlson is not the first player to step away from the game at an earlier-than-usual age, and he will certainly not be the last.