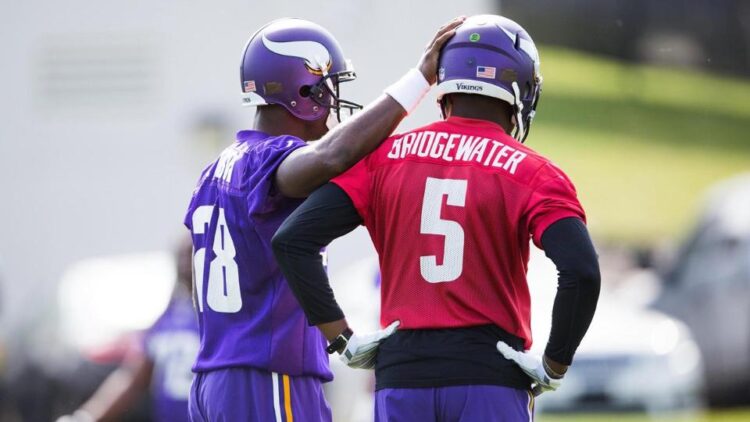 Adrian Peterson graced the Vikings’ practice field on Tuesday, and everything was suddenly right in the world. After months of heated speculation, the disgruntled running back finally returned to Minnesota and appeared comfortable taking handoffs from Teddy Bridgewater — as if no time had passed since his suspension last season.

Below, a look at Adrian’s first day back with the Vikings, courtesy of the team’s outstanding photographer, Andy Kenutis:

But a different Adrian Peterson stood in front of the media on Tuesday afternoon, where he discussed his time away from the team, the terrible incident with his son, and his relationship with head coach Mike Zimmer. This Peterson appeared humbled, sincere, and authentic; a man comfortable addressing his past mistakes and looking optimistically to a long future with the Minnesota Vikings.

Both Zimmer and Peterson addressed the media following this morning’s breaking news, and the press conference went as well for the Vikings and No. 28 as either side had hoped for. Zimmer took the podium first and immediately voiced his support for Peterson:

Just one week after giving Peterson an ultimatum (“He’s really got two choices. He can either play for us, or he can not play.”), Zimmer has changed his tune, working with the team’s best player to ensure Peterson sees the field in 2015. As ESPN’s Ben Goessling reported, Zimmer and Peterson spoke earlier this week and finalized a return to the Vikings:

But when asked about the conversations, Zimmer refused to comment, choosing to keep the details between Peterson and himself. “Adrian and I have talked,” he said. “We have had open communication and have expressed our opinions fairly openly. When Zimmer delivered his ultimatum after the second OTA last week, he wasn’t threatening Peterson, but sharing his opinion with the media. “The comment I made last week wasn’t about being confrontational,” he said. “He expressed his opinion and I expressed mine”. When asked about a possible Peterson trade, Zimmer shot down the rumor, stating that the Vikings had never engaged in such talks.

In true Zimmer fashion, the head coach quickly shifted the subject to the football field, where he expects his team to be competitive in 2015. “I do believe that we can be very, very explosive,” he said, elaborating on the fact that a talented running back, a talented quarterback, and a group of talented wide receivers “could be good for everyone.” And although Peterson is playing catch-up with his teammates, Zimmer, like most football fans, recognizes the beauty of a run from No. 28:

[quote_center]”He’s going to have to put in more work time ,but there’s not really a prettier sight when he as the ball in his hands.”[/quote_center]

Near the end of his time at the microphone, Zimmer reiterated the organization’s united front in bringing Peterson back to Minnesota. “The Wilfs have never wavered their support from Peterson as well,” he said. “I love this kid, I really do.” As he’s said all along, Zimmer isn’t just a firm supporter of Peterson, but a coach willing to do whatever necessary for his players. In the most simple terms, he’s a “player’s coach”, and one who funneled that passion into building a solid relationship with Adrian Peterson. He’s built a strong foundation with each of his players, and he expects they’ll approach Peterson’s return with the same camaraderie:

[quote_center]”He’s a Minnesota Viking. He’s one of our guys. He’s going to be wearing purple with us, fighting with us.”[/quote_center]

Peterson, wearing a grey polo, followed his head coach to the podium and started the press conference by reminiscing on a lost season. “The past year has been emotional for both parties involved. I’ve learned a lot, I’ve learned a lot from my mistake, and I’m moving forward.”

The 30-year-old running back spoke softly, presenting himself in a calmer, more reasoned light (a far cry from his recent Twitter rant). He expressed appreciation for each of his teammates, who were visibly excited to have Peterson at practice earlier today. “Each and every guy in the locker room has been supportive,” he said.” That support was partly responsible for bringing Peterson back to Minnesota, and he returns with one goal in mind — to bring a championship to the Vikings.

In regard to his absence from the Vikings’ first set of OTAs, Peterson cited “personal obligations” as his reasoning for missing practice. One of those obligations, understandably, involved mending his relationship with his son after the child abuse incident last May. Although Peterson agreed to a plea bargain and reduced his felony child-abuse charges to a single charge of reckless assault in November, he was suspended by the league and missed all but one game in 2014.

In April, Peterson was reinstated and required to fulfill all remaining legal obligations in Minnesota and Texas, as well as additional counseling and treatments. According to Peterson, he has met all of his requirements, from league-mandated therapy to counseling with his son, and is moving forward with his life.

As for his relationship with his son, Peterson believes it is moving in the right direction.

“The first person I apologized to was my son and that was right after the situation took place,” he said. “I apologized for the the mistake I made and I’ve been trying to move forward since then.” Some fans may never forgive Peterson for his actions, and some will forget about the incident once the season begins, but Peterson recognizes the gravity of his actions. “I made a mistake and I know a lot of people don’t view it that way,” he said. “It’s something that I regret and my son knows that and the people that truly know me and my character know that as well.”

Many fans are also angry about the behavior of Peterson’s agent, Ben Dogra, who reportedly fought with Vikings officials at the Scouting Combine and openly demanded a trade from the organization. “My agent has a job to do and he was doing his job,” Peterson said, excusing his actions as the standard for all sports agents. But Peterson also elaborated on the trade talks, which were seemingly blown out of proportion.

“With everything going on in my life during that time I really didn’t know what I wanted,” he said. “I didn’t know if I wanted to play somewhere else, retire, run track.” But in the end, the support of his teammates and his desire to remain a Viking for life kept him in Minnesota:

He praised the coaching staff, which he believes is “the best staff we’ve seen” since he’s been in Minnesota and also expressed a desire to make Zimmer proud, saying that he’s a coach that “you really don’t want to disappoint.” When Peterson takes the field in September (as he’ll likely skip the Preseason), he’ll be “anxious to get out there” and excited to test his body. For a running back who is nearing the end of his career — or so we think — Peterson said his body “feels good, feels fresh”, and that the almost-year off gave him a change to recharge both physically and mentally.

And for our readers, the fans of the Minnesota Vikings, Peterson expressed gratitude for their support throughout the years. “I really appreciate the support from the fans,” he said. “I watch the games, I see the 2-8 jerseys out there.” This season, fans won’t be the only ones wearing 2-8 jerseys on Sundays; Peterson will likely start Week One lined up behind Teddy Bridgewater. How does this make you feel, Vikings fans? Are you excited to see Peterson return? Or, are you tired of the drama and ready to move on?