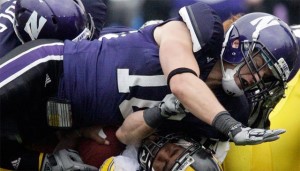 According to the Minnesota Vikings’ official website, the team has signed former Canadian Football League linebacker Brian Peters to the roster.

Peters, who enjoyed a four-year career at Northwestern, spent the last two seasons with the CFL’s Saskatchewan Roughriders. The 6’2″, 218-pound linebacker led the Roughriders with 78 tackles in 2014, adding 3.0 sacks, 1 forced fumble, and 2 interceptions to his impressive stat line. Before heading north, Peters played the 2012 season with the Iowa Barnstormers in the Arena Football League.

With the signing, the Vikings now have 11 linebackers on the roster — Jasper Brinkley and Dom DeCicco are set to become free agents in March. As Rick Spielman said in a pre-Combine press conference last week, the front office is looking to build the linebacker corps in the offseason.

Check back soon for a in-depth preview of the Vikings’ free agency plans surrounding the position.