Getting To Know The New Rams With Nathan Kearns 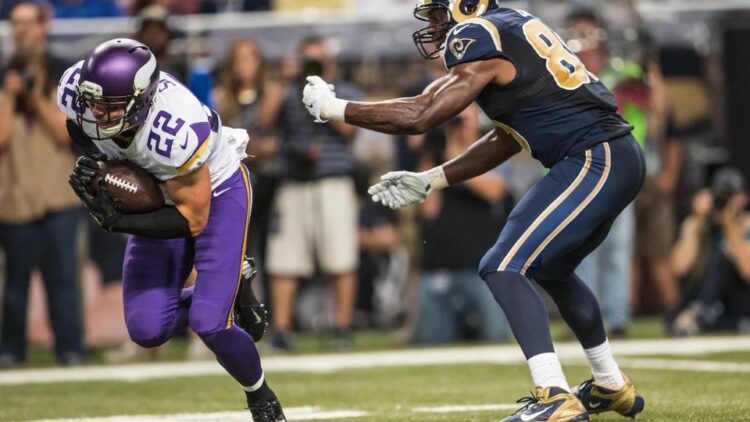 Mike Zimmer’s first regular season game as a head coach turned out to be a lopsided victory at the expense of the St. Louis Rams. This week’s matchup, however, is sure to be different for a number of reasons.

I decided to check back in with our friend Nathan Kearns of Turf Show Times to see what we can expect out of this 2015 version of St. Louis.

ADAM: Last time we talked, you were really high on Shaun Hill’s ability to be the starter in St. Louis. He’s now a backup in Minnesota. After our Week One win in 2014, our readers voted Cordarrelle Patterson as the “Player of the Game.” Obviously, a ton has changed since Minnesota’s 34-6 thrashing of St. Louis, so help get us Minnesota fans up to speed. What has all taken place to make this year’s version of the Rams different than last years?

NATHAN: The fact that Rams Nation was high on Shaun Hill to start last season (myself included) shows how far we’ve come in a little over a year. In terms of the roster, Jeff Fisher finally got his “Eddie George” in the drafting of Todd Gurley, who just had his jersey enshrined in the Hall of Fame for four consecutive 125+ rushing yard games. The offensive line is also (literally) completely new, with the Rams shifting from the “one-foot-into retirement,” over-paid veterans to green, recent-draftees. The change has brought new energy to the offense, including some much needed speed and versatility. Lastly, Shaun Hill and the hopes and dreams of a healthy Sam Bradford have been replaced with Nick Foles, who has been underwhelming, but efficient, so far this year.

However, the two more important changes to the “new” Rams aren’t players. Defensive Coordinator Gregg Williams has now had over a full year to install and tweak his complex defense. Last time the Rams played the Vikings, the Mad Scientist had only been around for four or five months. Since then, the Rams defense has posted two shutouts (at the end of 2014), and currently have the top graded defense on Pro Football Focus (PFF), all while allowing the 4th-fewest total points in the league. Finally, arguably the biggest change to the Rams was the release of Offensive Coordinator Brian Schottenheimer, and the promotion of Frank Cignetti. We’ll certainly touch on this a little more…

ADAM: Here in Minnesota, we know all-too-well how fun it is to have an electric running back like Todd Gurley. With that being said, we also know how frustrating it can be to have opposing defenses stack the box to stop the run and have an incompetent passing game that can’t take advantage of that. Tell us, is the Rams passing offense (currently ranked 32nd) able to take advantage of the attention Gurley will surely draw?

NATHAN:  In St. Louis, we call the Rams style of play “Fisherball.” Watching the games can be excruciating, relying heavily on the defense to make stops and force turnovers, utilizing the special teams to win the field position chess game, and hoping to gradually grind down the opposing defense with a heavy dose of Todd Gurley. However, there is no denying that the passing game has been stagnant. Luckily, offensive coordinator Frank Cignetti has been masterful in incorporating the short passing/screen game into this offense; in particular, getting Tavon Austin the football in open space. That Tavon Austin piece is really the catalyst to the Rams offense, despite the (just) attention paid to Todd Gurley and his dominance.

The 5’7″ dynamo is essentially the only skill player keeping opposing defenses honest, constantly being shifted around in the backfield. In particular, the Rams have made a habit of motioning Tavon from sideline to sideline, strategically handing him the ball for the quick end around. His sporadic use, and obviously his playmaking abilities with the ball in his hand, has been causing defenses fits, particularly at the second-level, forcing some hesitation from the linebacker corps or sloppy run angles… which is more than enough for Todd Gurley to expose defenses for his league leading 330 yards gained on 15+ yard carries.

The other key has been Nick Foles. While unspectacular, overall, he has typically done just enough in the passing game to keep defensive coordinators from stacking eight or nine players in the box. In fact, Nick Foles ranks Top 5 in “deep pass accuracy” this season. Sometimes, it only takes one or two of those bombs to open up the defense for the rest of the game.

ADAM: The St. Louis Rams have a scary-good defense. I think the Vikings struggling offensive line is in for a real test this week. I also think the Vikings can be outright stopped if teams take away Adrian Peterson and Stefon Diggs. Can the Rams defense accomplish this with confidence and which players will draw those responsibilities?

NATHAN: To be frank, the Rams have the best defensive line in the NFL, led by 2013 PFWA Defensive Player of the Year, Robert Quinn, and arguably the best interior defensive linemen in the league, Aaron Donald. Currently, three of the Rams interior linemen rank Top 15 against the run, while both regular starting defensive ends rank Top 10 against the run. Despite all of that, I highly doubt anyone outside of the Rams lockerroom and the most optimistic of Rams fans genuinely believe (with confidence) that St. Louis can completely stop Adrian Peterson. In reality, if they can repeat their performance from their last meeting with the Vikings (21 attempts, 78 yards, no rushing touchdowns), they should be just fine. The issue with last time around was really untimely turnovers and a handful of “huge” defensive mistakes (aka Cordarrelle Patterson’s 67-yard run). Hopefully, the combination of Nick Foles and the Rams defense being more comfortable in Gregg Williams system will be enough to repeat their 2014 performance against Adrian Peterson, and clean up those other areas.

ADAM: Outside of Gurley, which rookie has made the biggest impact for the Rams this year and how do you see them impacting this game?

NATHAN: There are other rookies besides Todd Gurley?

In all seriousness, it is difficult to pick another rookie that has stood out in their contributions to the team. After the Gurley selection, Jeff Fisher and General Manager Les Snead went all-out drafting offensive linemen, two of which are currently starting on the offensive line. By default, right tackle Rob Havenstein will get the “rookie impact” nod. He has been adequate this season. He has yet to allow a sack this year, has yet to commit a penalty, and has been slightly above average in the run game. I think most in Rams Nation hope his impact is simply another adequate, or better, game; opening holes for Todd Gurley and keeping Nick Foles from getting destroyed too often in the backfield.

ADAM: With the Vikings at 5-2 and the Rams at 4-3, there could be some huge playoff ramifications with the outcome of this game. Tell me what the expectations are among Rams fans. What would a win do to build optimism? Is a win against the Vikings an absolute expectation at this point?

There is some optimism, bordering on expectation that the Rams will begin to play (and win) more consistently. However, over a decade of incompetency has caused many to be reluctant to “expect” anything, especially when momentum appears to be going in the Rams favor. However, for the reasons mentioned above (i.e. lesser performance on the road and outside of the division), it would certainly mean a lot of fans to see St. Louis snag a victory over a Vikings squad that has regularly had the Rams’ number in the past. Moreover, sitting at 5-3 on the year, with a 3-0 record in the NFC West, would certainly set the stage for the Rams to push for a division crown.