Bud Grant: the Man, the Coach, the Friend 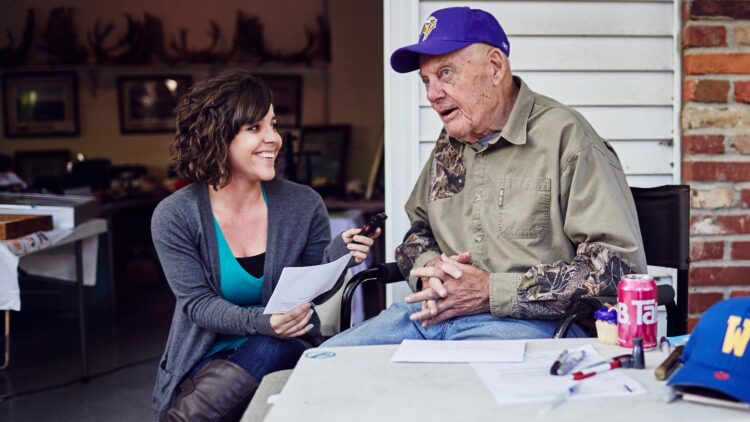 [vc_row][vc_column][vc_column_text]Blue jeans. One leg crossed over the other. He’s wearing a casual button-down shirt, tan and camo, and he proudly displays two baseball caps within reach. One—Vikings purple—covers silver-white hair, while the other—Winnipeg blue—sits near a can of Tab soda on the card table.

He’s manning a garage sale, carefully counting out dollar bills and quarters, and it all seems rather ordinary… except he also signs autographs for the visitors.  “Bud Grant. HOF ’94,” he writes. Over and over again. On a worn leather football. The rod of a fishing pole. An old game program.

Harry “Bud” Grant will forever be known as one of the top coaches in NFL history, and many remember him as the straight-faced coach who soldiered the sidelines and held players to an exceptionally high standard of conduct.

“I wasn’t that tough,” Grant tells me. “I don’t think so. I suppose you’d have to ask the other players or coaches – I can’t answer that question. We had rules, but it was an easy job, really.”

He breaks his signature stoic expression for a split second, just long enough for me to question his sincerity. I prod a bit, ask him about the no-heaters rule he implemented during winter games.

“We had no indoor practice facilities in those days. We had to practice outside, so why not play outside?” He answers matter-of-factly. “We became acclimated, learned to play with no gloves, no heater, no underwear […] so Sunday was easy for us. It was tougher for other teams that wanted to come in and wanted to be warm. We were cold, but we still played.”

For Grant, it’s all about practicality.

Case in point, you may not know that the former coach stands alone as the only man to ever play in both the NBA and the NFL. In fact, Grant won the first championship in NBA history with the Minneapolis Lakers. He left the Lakers, however, to join the Philadelphia Eagles as a defensive end. The decision proved a no-brainer.

“The bottom line was that I could make more money playing football than I could playing basketball,” he explains.

Grant viewed sports—playing or coaching—as just a job, a way to make one’s living, not concerning himself with the spotlight or the fame. For an icon like Grant, media requests are not uncommon, although he says they now come very few and far between. League reps and cable stations hounded the coach for appearances shortly after his career, asking him to audition for game-day commentary and halftime interviews.

“I figured out it would be like 24 road trips,” he says, scoffing. “I’m out of this to stay home, not to get on the road again. My ego didn’t need it.”

In talking with Hall of Fame quarterback Fran Tarkenton, he noted that Grant’s confidence and demeanor is different than most anyone else’s.

[pull_quote_center]He’s as secure in his own skin as anybody I’ve ever known,” Tarkenton said. “People call him ‘stoic’ on the sidelines […] He’s anything but what people think he is. He’s the most interesting person in the world. But he can look at you with those steely blue eyes and just disarm you. Every word that came out, everything he did, every theory he had, he thought it through.[/pull_quote_center]

Grant tells me he doesn’t think about all of the attention and reverence; that’s just not him. When asked about the significance of winning so many games and taking the Vikings to four Super Bowls, he smiles.

Grant coached until the last of his six children graduated college. He retired at age 58, almost 30 years of coaching experience—and several Pro Bowl athletes—under his belt. Football paid the bills, but the team and the players clearly meant a lot to Grant. He recalls old memories, leaking a smirk here and there.

When Grant started coaching in 1967, Tarkenton had already spent some time in Minnesota but currently played for New York. Grant needed a solid QB, and he brought Joe Kapp to Minnesota to play three seasons.

In 1972, Tarkenton rejoined the Vikings for a second stint at the helm. Grant says the following:

[pull_quote_center]I had seen enough film of him to say, ‘hey—that’s the guy I want. Tarkenton should go down as one of the top three quarterbacks of all time […]. At that time, rules were different. Passing protection was different. That’s how he got the nickname ‘The Scrambler.’ People couldn’t block and hold like they do now – he was a special player.[/pull_quote_center] Tarkenton’s usual place on the sidelines was right next to Coach Grant. (photo from Vikings.com)

Another player who helped the Vikings to so many division championships and Super Bowls was defensive end Jim Marshall, who also proved a special player to Grant. Maybe because they played the same position, or maybe because they each had a mind of his own, but many will say Marshall was the player Grant most connected with.  When Grant took the job with Minnesota, Marshall had already played several seasons with the Vikings. The coach says Marshall was unique, marched to a different drum—“a rebel in his own right.” Grant searched for the existing leader of the team; Marshall stood out right away.

“When I came [to the Vikings] I changed up the program a little bit, and Jim bought it!” Grant says. There’s surprise in his voice, as if he still can’t believe it worked. “The players looked at Jim a little differently […]. If I said ‘jump’ and Jim jumped, they’d all jump.”

Former linebacker Matt Blair (’74-’85) remembers Grant as someone who challenged every guy on the field to give 110 percent. He expected players to work things out in practice, to make the right decisions on the field. In that sense, Grant was tough.

If Grant had to tell a player to do something more than twice, the reality was he might not stay on the team.

“We were out there practicing. [Coach would] go and make the phone call, then come back to the field,” said Blair. “We’d say ‘Uh-oh. Somebody’s leaving.’ Luckily, that only happened once.”

He added, “To see what Coach Grant has done, it’s just exciting to have been part of the team and part of his career.” Grant expresses nothing but respect for his players, and they feel the same towards Coach. Yes, he set the bar high. But every single player knew Grant cared about him as an individual and not just a statistic; he invested in his team both on and off the field. Blair recalled times that Grant would have personal conversations with him and his teammates. During afternoon breaks at training camp, Grant would often join some of the guys to play bocce ball or just hang out.

To Grant, relationships have always been important. He celebrated his 88th birthday just last week, and he’s proud to say he has many life-long friends. Despite an occasionally gruff exterior, his eyes soften when he tells about those people most important to him, one of which is the iconic Sid Hartman.

Hartman, who recently celebrated his 95th birthday, is just as storied as Grant himself. The Minnesota sports writer started out by delivering papers for the Minneapolis Tribune, and he wrote his first column for the Minneapolis Daily Times in 1945. As most sports fans know, Hartman continues to work as a reporter today.

Interestingly enough, Grant and Hartman met over sixty years ago at the University of Minnesota, each on their first day—as a student and beat reporter, respectively. The writer introduced himself to the football player, and the rest was history. Grant and Hartman (photo from Vikings.com)

“Sid is my best friend,” Grant says, smiling. He points his finger assertively. “My best friend. Use the word ‘best,’ please.”

Grant says he and Hartman have very different personalities, and they form an unlikely friendship. They are friends in spite of, not because of, he explains.

“You can play pranks […] or do things to your best friends that you wouldn’t do to just any friend. Sid and I understand one another, and we tease one another. We’ve had some pranks that were played on both of us, but that’s friendship.”

I ask him to share a story with me, tell me what types of pranks he pulled on Hartman. Grant leans forward, laughs.

“You’ll have to ask Sid about that one.”

Hartman continues to cover Vikings happenings, and Grant stays connected with his former team as well. He thanks the Vikings for keeping an office for him, now 30 years later. Grant stays out of the spotlight, but he will from time to time revisit his old stomping grounds to take in a practice or visit with the current coaching staff.

He especially likes Mike Zimmer—his personality, his coaching style, his understanding of the game. Zimmer, approaching just his second season as a head coach, is the same age (58) Grant was when he retired. “Interesting,” the older coach calls it.

“But Zim’s been in the business a long time,” Grant says. “He’s a great guy. He likes to fish, he likes to hunt, he’s very intense. He knows football.”

Grant feels confident that Zimmer has done a great job bringing in the right players, and that he will help the Vikings succeed. That’s high praise coming from Coach Grant, who certainly had his own methods of leading a team.

To many football fans, guys like Grant, Marshall and Tarkenton were role models and even heroes. However, Grant has no interest in being thought of that way. He may have coached some of the greatest NFL players, but he emphasizes that not a single one should be called a hero.

[pull_quote_center]Sport is entertainment; it’s not life or death. There is nothing older than yesterday’s newspaper. We can have movie stars, hockey stars, football stars—they’re not heroes. Heroes fought in a war, sacrificed something, made changes that matter. Sports figures are stars—they come out at night and they fade in the morning. But heroes last forever.[/pull_quote_center]

He sits a moment, deep in thought. For anyone who knows Grant, his priorities and perspective cannot be missed. A coach by trade, but so much more than that: a man of character, a father, a quality friend.

As our conversation ends, a few final customers approach the table to purchase their items and meet Grant. He shakes my hand, and I ask him what the most valuable item at the sale is; he gestures to the worn catfish trap, still in its place.

“I guess no one wants to catch any catfish,” he scoffs.

And although he doesn’t allow much of a smile, I now notice the sparkle in those blue eyes. Because just like football, you can tell Coach is enjoying himself.

Even if he won’t admit it. (credit for cover photo and photo above: Joe Lemke)