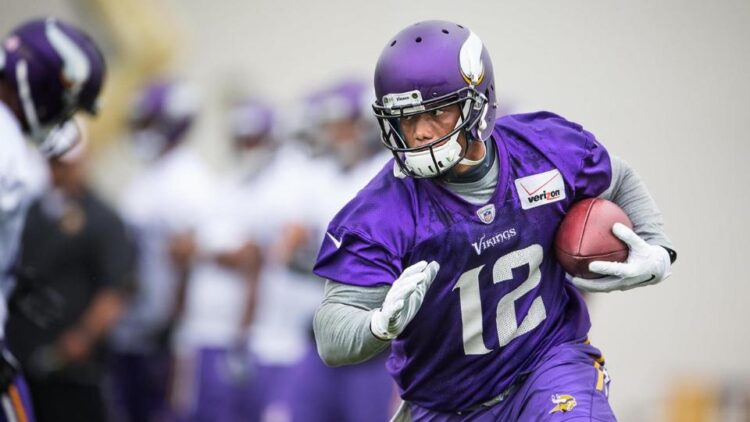 In this four-part series leading up to training camp, I’ll be profiling the Vikings you should target in your fantasy football leagues this year. Look for new additions every Thursday and Friday the next few weeks and stay tuned for a bonus selection at the end!

You know the story of Charles Johnson — practice squad player-turned-Vikings’ No. 1 receiver. The 6’2″, 225-pound Johnson spent one year under Norv Turner in Cleveland, and after tearing his ACL, landed on the Browns’ practice squad. Turner knew Johnson’s talents and abilities, and the Vikings signed him last September with the offensive coordinator’s urging.

Johnson started the season slow, hauling in six catches for 60 yards and zero touchdowns in his first five games with the Vikings. But in Minnesota’s final seven games, Johnson led the team with 47 targets, 25 receptions and 415 receiving yards. In addition to his two touchdown receptions, the offense’s scoring increased from 16.4 points per game in Weeks 5 to 9 to 24 points per game in Week 10 to 16.

Heading into 2015, Johnson is Teddy Bridgewater’s go-to guy and “far and away” the team’s best receiver. When asked about Johnson’s impact this offseason, Turner heaped nothing but praise on the 26-year-old receiver, per Mark Craig of the Star Tribune:

[quote_box_center]”Part of that was we started playing Charles Johnson, which gave us a different guy on the outside to attack,” Turner said. “It created some differences in how people defended us. I think we became a much more efficient offensive football team and put ourselves in position to win games. We won some and there were some that a year from now, put in the same situation, we’ll be ready to handle it and be ready to win.”[/quote_box_center]

Now, Johnson is the team’s starting X/Split receiver, a position formerly held by Cordarrelle Patterson. He’ll work opposite Mike Wallace and Jarius Wright in the slot, and if last year’s second-half trend continues, his numbers will climb thanks to a healthy relationship with Teddy Bridgewater. The hype isn’t limited to Minnesota, though — NFL.com ranked Johnson 20th on their “Making the Leap” countdown this offseason.

According to Marc Sessler, Johnson played in 94.9 percent of the team’s snaps over the final six games last year. As the X receiver, he’ll run second fiddle to Wallace, but Wallace’s deep speed will likely open opportunities up for Johnson, Rudolph, and Wright in the slot. In analyzing every Norv Turner offense since 2002, Sessler found that receivers in Johnson’s role averaged 40.5 catches for 633 yards — numbers I expect he’ll surpass in 2015.

In a shortened season, Johnson scored 58.40 fantasy points. In comparison, Cordarrelle Patterson scored 62.10 points, with a chunk of that coming on an explosive Week 1 touchdown run against the St. Louis Rams. Once Johnson sent Patterson to the bench, his fantasy production increased tremendously. In the final seven weeks of the year, he averaged about 7.5 fantasy points per game, with a season-best 16.3-point performance against the New York Jets in Week 14.

How will he improve on those numbers in 2015? A closer look at the projections from Football Guys reveals an optimistic outlook. If I were a betting man, I’d put my money on David Dodds’ prediction:

Quite the improvement, huh? Part of it comes from Bridgewater’s rapport with Johnson, Johnson’s full recovery from an ACL tear, and his familiarity of Turner’s offense. But, another huge aspect is the teams the Vikings will play in 2015, and their inability to stop wide receivers.

Johnson’s projected statistics put him in the company of Eric Decker, Larry Fitzgerald, Jeremy Maclin, and Allen Robinson. Based on his ADP, he’d be a worthwhile pick in Round 7 or Round 8 of most leagues (12/14-man), but may fall lower than that. And for those in auction leagues, Johnson’s value currently sits at $6.

If Teddy Bridgewater improves as much as fans believe he will, and Johnson starts as many games as we expect, fantasy football owners could be in for a prosperous season from Norv Turner’s favorite new target. Based on his value and the surrounding hype, you may be lucky to find Johnson in the seventh or eighth round of your league. Grab him while you can, and enjoy watching him explode for some impressive outings in 2015.

Tomorrow, I highlight a player making his long-awaited return to the field.