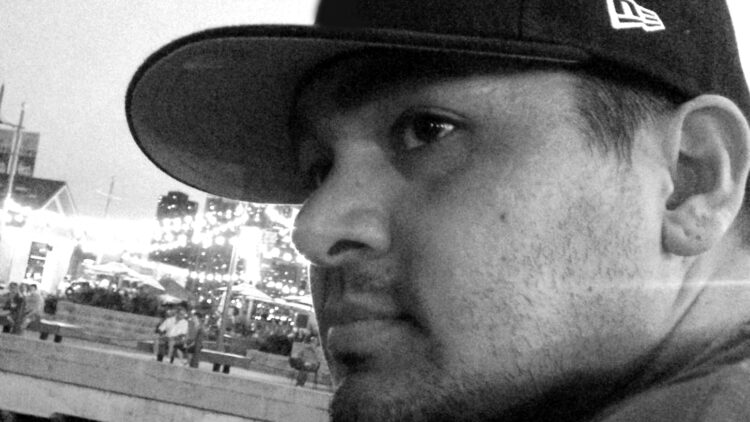 (photo used with permission)
If you are a Minnesota sports fan and a memorabilia collector, chances are you’ve seen a piece of Ryan Fors’ artwork along the way.Fors is an avid Minnesota sports fan himself, and he has loved to draw and paint for as long as he can remember. It only makes sense that his two interests would combine, but he never imagined it would grow the way it has.

“I got into the stencils and sports paintings about 7-8 years ago as an inexpensive gift I could give family members,” Fors explained, “and things kind of took off from there.” Over the past several years, Fors has created over 400 pieces, many of those being likenesses of Minnesota athletes.

Of course, several of the paintings feature Vikings players. Fors has been supporting the purple and gold since Day 1.

“My earliest memory is when I was given an autographed Carl Lee napkin from a family friend,” he said. “As a kid, I thought that was the coolest thing.”

Although Fors didn’t play football himself–rather, he was a basketball player–he loved watching the Vikings and had many player favorites throughout the years. The fan has no doubt in his mind when it comes to his all-time favorite player, though: Randy Moss, hands down.  Moss played with an intensity and natural talent that Fors (and many other Vikings fans!) thrived on, and Fors’ prints featuring Moss are incredibly popular.

Like most die-hard fans, Fors feels plenty of excitement surrounding Minnesota’s current roster and upcoming 2015 season. Despite the unforeseen road bumps in 2014, Fors reflected on the positives of the situation and also high expectations for next year:

[pull_quote_center]”With what we had to deal with throughout the season and with a new coach, I think we did well. Teddy [Bridgewater] got some experience, hopefully AD comes back, and hopefully the new guys and Draft help us out. I think anything less than the playoffs next season would be a disappointment.”[/pull_quote_center]

Fors hopes to see Minnesota draft well at the end of the month, and he would love to see cornerback Trae Waynes playing at TCF Bank Stadium next year.The Vikings have made some decent free agency moves as well this offseason, including adding wide receiver Mike Wallace to the roster.

“I’m excited to see Wallace in purple,” Fors said. “I’m hoping he can help Teddy out downfield and also open things up for Adrian [Peterson].”

Who is he most excited to watch next season? Fors said it has to be his favorite player on the current roster: linebacker Anthony Barr, who will be entering his sophomore season with Minnesota.”The combo of speed and power is just fun to watch,” Fors explained. “[Barr has the] ability to make a game-changing play at any moment. Plus, he’s a fellow sneaker lover!” Athlete You’d Like to Paint That You Haven’t Yet: I’ve been trying to clear up some free time to get a Purple People Eaters piece done.

Favorite Movie: So many to choose from! But I think I have to go with Pulp Fiction … with Kingpin being a close second.

Ryan on the Web:
Twitter: @ryan_fors
Contact: info@ryanfors.com
See more of Ryan’s work and his online store at ryanfors.com!