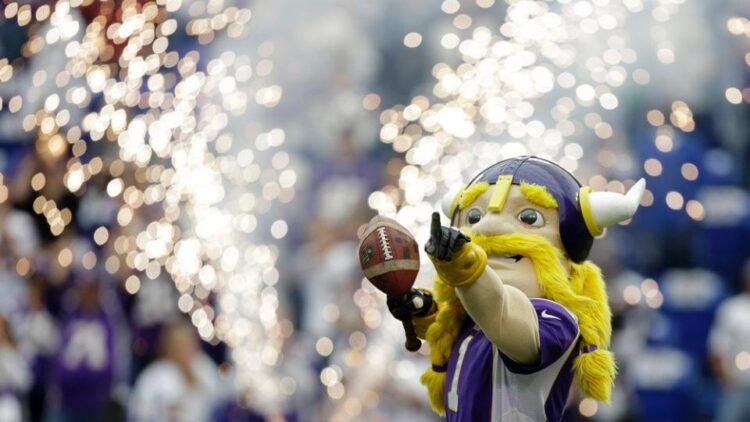 This week’s Vikings Fan Spotlight is the final segment of a 3-week project. I had such an amazing response on Twitter from Vikings fans all over the world, and I decided to break this feature into three separate parts. Q: How did you first become a Vikings fan?
A: My grandfather’s great grandfather is from Minneapolis, and my grandfather […] calls himself “The biggest Vikings fan in Europe.” He religiously follows the Vikings every Sunday when they’re on, and he also religiously watch[es] the University of Minnesota’s football team, the Golden Gophers. Sometimes when I was younger, [I would] stay at my grandparents’ just to watch the Vikings with him, therefore the transition to becoming a Vikings fan was very easy.

Q: Are there a lot of other Vikings fans in Denmark?
A: In Norway [where I am studying abroad], there are almost none as I know of, but in Denmark there is a huge Vikings community. Denmark in general is a very “NFL-happy” nation and as far as I know one of the biggest followers of the sport outside the U.S.

Q: Which NFL team is the most popular near you?
A: The Oakland Raiders are by far the most popular team in Norway–a team I truly despise. There are a lot of people wearing their caps and jerseys everywhere you go. There are also a few Cardinals and Patriots in the mix as well.

The last one might be more unlikely, but I’m always going to hope. Q: How did you first become a Vikings fan?
A: The first full game of American Football that I sat through from start to finish was a thrilling Vikings @ Bills overtime game in 2002. It finished 45-39 to the Bills, but it was the Vikings that caught my eye. The Culpepper-to-Moss show was in full effect, and I picked my team there and then. Vikings fan for life.

Q: Who is your favorite player on the current Vikings roster?
A: John Sullivan. I thought Matt Birk was irreplaceable until Sully came along. As an amateur football player here in Ireland who also plays offensive line, I know how hard it could have been losing a leader like Birk, but Sully stepped right in and led that offensive line to great feats — only six other offensive lines in history have blocked for a 2,000 yard rusher! I also got a signed football from him in Dublin prior to the Vikings/Steelers game in London which was nice!

Q: Do you own/collect Vikings memorabilia?
A: Yes! My favourite item is my Vikings tattoo! My first tattoo, I got the Norseman on my arm and have not regretted it since. I’ve jerseys, cuff links, baby clothes, stickers, posters all Vikings related scattered around the house too!

Q: What are you most looking forward to in the 2015 season?
A: I’m excited to see how Teddy will develop. Watching all the games this past season, you can just sense there is a lot more to come from him and that it is going to be special. Q: Who is your favorite player on the current Vikings roster?
A: I have a bunch of favorites, though the main one must be Cordarrelle [Patterson]. I was quick to buy my first Vikings jersey when his first season with Minnesota started. It was really a let-down how badly he performed in 2014, though; I’d love to see him succeed. His on-field flashiness and his great spirit on TV clips are quite inspiring to me.

Q: Do you own/collect Vikings memorabilia?
A: Yes! A bunch of training clothes I use when working out, a uniform with #84 and flags from PITvMIN in London. I think the favorite piece are the flags, since it’s tied to a personal experience — the first and only Vikings game I’ve watched live.

Q: Who should the Vikings draft at No. 11?
A:  I find it really hard to follow along with college football from here, so I don’t know about all the prospects. So I would want our favorite team to select the best player available to boost the secondary or our linebacker corps. Kevin (right) at Wembley Stadium for the Vikings game

Q: How did you first become a Vikings fan?
A: We had a kids TV program in the early ’80s called Entertainment USA. Each week the presenters visited a different city touching on many aspects of living in that city. For some unknown reason I was really taken by life in the Twin Cities, and when they spoke of the Vikings I was hooked. I was hooked by empathy for a four-time super bowl loser, and I loved the concept of the Purple People Eaters. The playoff run in ’88 was covered extensively by UK TV and cemented my love…. again made stronger through the pain of narrow defeat!

Q: Who is your favorite player on the current Vikings roster?
A: Anthony Barr. I think coach Zimmer is building something really special on defense. Anthony is going to be a star with athleticism, speed, strength and a knack for getting to the ball!

Q: Who should the Vikings draft at No. 11?
A: If Amari Cooper is there (I think it unlikely), we should take him. Alternatively, trade back and with three picks in the first two rounds get a LB, CB & G. Add to that a RB with the extra pick we get when we trade AP.