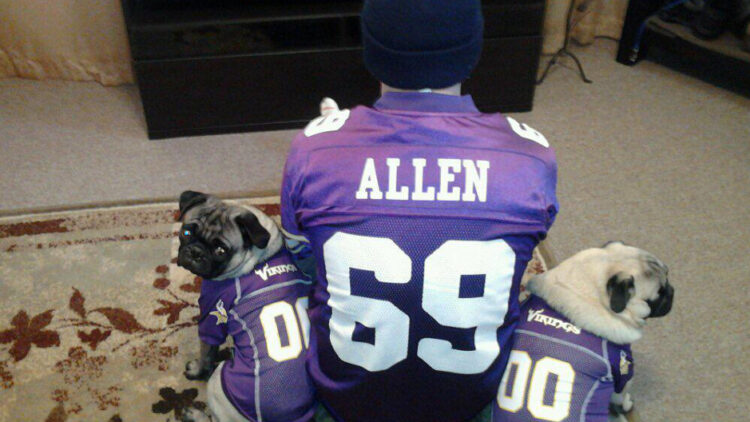 Living in Sebeka, MN, Mike Arthur proves to be another storied Vikings fan, his childhood filled with memories surrounding the purple and gold. When Arthur was in kindergarten, he played football with his friends, and they each picked players to act as. Arthur always chose Anthony Carter or Tommy Kramer.

Things really picked up for Arthur when Hall of Fame WR Cris Carter entered the picture.”I became a super fan when Warren Moon and Carter started connecting for all those touchdowns,” he remembers.

There has been plenty of disappointment between “the good ol’ days” and now, and Arthur has endured the pain and heartache with the rest of us. However, he’s ready and excited for a season that will hopefully go a little more according to plan.

The offseason is in full swing, and the Vikings have made plenty of moves praised by the fans, including Arthur. Drafting CB Trae Waynes and LB Eric Kendricks will prove significant for Minnesota. Arthur weighs in on the selections:

[pull_quote_center]”Waynes will be a huge upgrade in our secondary and should help this defense turn the corner from being good to great. I think of all the trouble the Vikings had getting off the field on third down last season, and he should be the key to that puzzle.” [/pull_quote_center]

Arthur goes on to express that Kendricks will be a major part of stopping the run, and even adding Danielle Hunter in the third round will bolster the defense. With former defensive coordinator Mike Zimmer at the helm, that area of the team just keeps improving.

According to Arthur, Zimmer is “refreshing,” just what the Vikings needed after the Brad Childress and Leslie Frazier eras. From his football IQ and play calling to humble and yet focused attitude, Zimmer has fully earned Arthur’s respect.

“We finally have a guy that does not tolerate nonsense…” Arthur said. “He is calling plays to put the Vikings in a position to win and not to stroke anyone’s ego […] He seems to call it like he sees it, and you have to appreciate that.”

Arthur hopes to see not only an impressive defense but a strengthened offense as well. Even with all the positive additions to the roster, Arthur doesn’t expect the No. 1 difference-maker to be a rookie. After all of last season’s drama, Arthur expects Adrian Peterson to make the biggest impact in 2015.

[pull_quote_center]Peterson carried this team to a playoff birth just a couple seasons ago. He will bring a different element to Teddy’s game, make this O-line look better, take pressure off of the receiving game, give the defense a break and ultimately lighten the load for the entire team. [/pull_quote_center]
Anyone who meets Arthur will be unable to question his allegiance… just ask his family. Even Arthur’s dogs support the Vikings! And while Arthur is 110 percent dedicated to the Vikings, football is not his only passion. The fan enjoys anything related to the outdoors—fishing, kayaking, scuba diving—and he also loves caring for animals.

Specifically, Arthur spends time at the Headwater’s Animal Shelter in Park Rapids, MN. The shelter provides care and re-homing services for hundreds of animals every year, and Arthur explains that the services are privately funded by contributions from community members.

“A small group of very dedicated people have allowed something like this to happen and be successful,” Arthur says. “We even had contributions made by Brian Robison and Kyle Rudolph. I can’t say enough good things about Robison and the way he went out of his way to […] get autographs on some memorabilia that was auctioned off to fund medical care for an injured animal.”

Arthur is a die-hard fan, a family man, and an animal lover … until the Vikings play the Bears or the Lions.

And then all bets are off. You can add any former Viking to the current roster — who would it be? I would love to see Teddy stand in a pocket held up by a guy like Randall McDaniel.