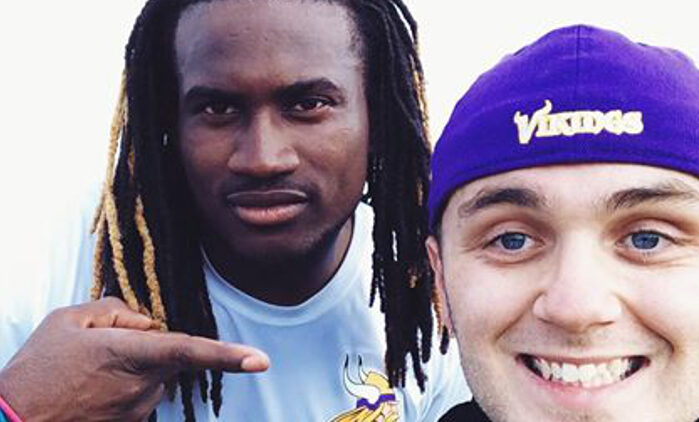 People who can honestly say they are working their dream job are few and far between. But Joe Lemke is one of those people. The Twin Cities native is a life-long Vikings fan and a professional photographer; last year, he got the opportunity to combine the two into one pretty sweet gig.

At 27 years old, Lemke has been taking photos professionally for seven years, but he has been supporting the Vikings for as long as he can remember. Need proof? The first jersey he owned was none other than Warren Moon!

The photographer has extensive experience—regularly shooting editorial, portrait and wedding content as his own business and also working as one of two concert photographers at the Xcel Energy Center and Roy Wilkins Auditorium. However, he had never done much sports photography and always thought it would be an incredible job to work for the Vikings.

Lemke decided to go out on a limb, reaching out to full-time team photographer Andy Kenutis. As a fan, Lemke loved the action and intensity of the player shots Kenutis often posted on Vikings.com and via social media. As an artist, he admired the detail and impressive quality of Kenutis’ work.

Lemke contacted Kenutis, sending him a link to his own portfolio.

“Honestly, I was just hoping to meet for lunch and pick [Andy’s] brain about his football shots,” he admitted. “He wrote back to me, liked my work, and we got lunch. He’s a great dude.”

Ultimately, Kenutis offered the Vikings fan the opportunity to attend mini camp and work on taking some photos of practice. Lemke captured some unique shots over a few days at camp; before he knew it, Kenutis brought him on as a part-time member of the photography team.

[pull_quote_center]”Getting to walk out onto the practice field at Winter Park for the first time was amazing.  Standing on the field with many of the players that I watch every Sunday during the regular season was a pretty surreal experience.”[/pull_quote_center]

Lemke went on to work with Kenutis and the other team photographers in training camp through the regular season, and he offered us a glimpse into a typical game day routine. The photographers’ roles change from week to week, which guarantees a lot of variety in the style of photos captured any given week.

“Sometimes there are specific players that we each get assigned to pay more attention to.  We all [work to capture] the important action moments as they happen, but sometimes we are asked to focus on a few specific people.  We also all get photos of the cheerleaders, Viktor the Viking, and fans enjoying the game!”

As one might expect, there are certainly different obstacles that come with shooting sports. Unlike portrait photography or even concerts, in a live sporting event it’s nearly impossible to predict where the action is heading.

“It’s easy to get a photo after a receiver catches the ball, but getting the cool shot right before he catches it is more difficult,” explained Lemke.

However, Lemke embraced the challenge head-on, and his work clearly reflects his hard work and talent. Like most Vikings fan, Lemke can’t wait for the 2015 season—not only as a photographer, but as a die-hard supporter of the Purple and Gold.

One of the most exciting times is the offseason, and we are all eager to see what moves Minnesota makes in the Draft. If it was up to Lemke, the team would grab a new receiver to add to the lineup. Adding a standout rookie to the lineup with Greg Jennings and Charles Johnson would further increase Teddy Bridgewater’s confidence and bolster the offense as a whole.

Lemke weighed in as a fan on the 2014 season and what he’s anticipating moving forward. In his opinion, fans who feel negatively about the season based on missing the playoffs should really look at the year from a different perspective.

[pull_quote_center]”This Vikings season gave me a lot of hope,” he said. “What I saw was a year of rebuilding and constant improvement. So many variables changed this year, and our new coaching staff did a great job of rolling with it, not making excuses […] This season made me the most excited that I’ve been as a Vikings fan in awhile.”[/pull_quote_center].

Enjoys: Hanging out with his girlfriend of 4 years, Lydia, watching Vikings (away) games with his dad and grandma, and spending time with his mom and family in general.

Hobbies (Besides Photography): Bowling. Yep! he’s on a league!

Offseason Action:  Currently on a six-week tour with the band Motion City Soundtrack, photographing all of the shows and documenting life behind the scenes.

Joe on the Web: Twitter: @joelemke | Website: www.joelemke.com (Vikings photos will be added to the site this spring!)