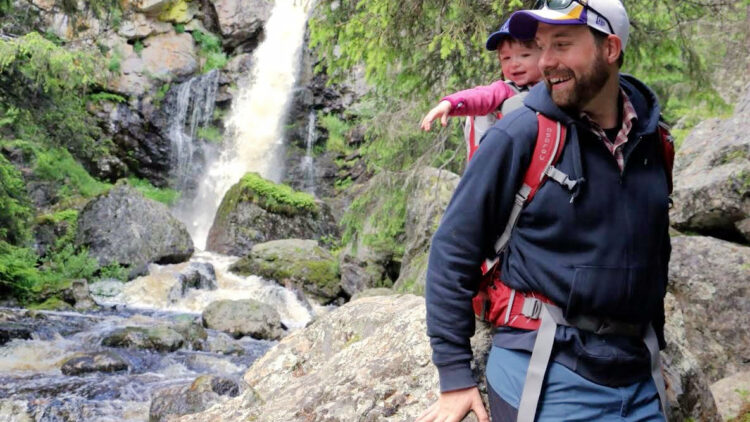 When the 2015 NFL schedule came out, I found myself frustrated and complaining because the Vikings’ season opener doesn’t start until after 9:00 p.m. Which means I will be awake until after midnight. On a Monday. I couldn’t believe this level of inconvenience.

And then I met Erik Sandgren.

Sandgren lives in Täby, a suburb of Stockholm, Sweden. There is a seven-hour time difference between Minneapolis and Täby. When the Vikings play the 49ers on Sept. 14, Sandgren will be tuning in at 4 a.m. And suddenly, just like that, I feel like a much less dedicated fan.

Sandgren’s story is a good one. Now 35 and loving life with his wife and daughter, Sandgren first became a Vikings fan almost 20 years ago when he lived in Boise, Idaho as an exchange student. His host family, the Fends, provided Sandgren with plenty of rich experiences and helped integrate him into the U.S. culture.

As Idaho has no NFL team of its own, John Fend adopted the Denver Broncos as his team years ago. His son, Kyle, supports the Green Bay Packers (but we won’t talk much about that). Sandgren was a big fan of European soccer, and he was disappointed that the U.S. did not have a big emphasis on the sport at the time. Both being big American football fans, John and Kyle introduced the sport to Sandgren. At first, he was less than fascinated.

“I enjoyed watching the games, but I really had no tooting interest,” Sandgren recalls.

He gradually grew more intrigued by the NFL and football in general,  but Sandgren still didn’t know which team he would cheer for. It soon became clear.

[pull_quote_center]I went by the nickname ‘Swede’ in high school. Somebody connected that to a certain team in the Twin Cities, and that’s how it all started,” Sandgren says. “I was appointed to the Vikings, I guess.[/pull_quote_center]

Sandgren and Fend attended Friday evening high school games together, and most Sundays the two watched both the Vikings game and the Broncos game together. Fend recalls how Sandgren soaked up all he could about football.

“The questions never ended,” Fend says. “Especially interpreting the sportscasters’ comments on the type of play run. I will say he caught on quickly and today is way more knowledgedable about the game’s fine points than I am! […] Erik also loved to throw the pigskin around in the back yard. I taught him to hold it and throw it, and he got quite good.”

The teen followed the Vikings closely while living in Idaho (1997-98 season), but upon moving back to Sweden he got away from closely tracking the team. Interestingly, he didn’t pick the fascination back up until 2011. He laughed, acknowledging the couple of great seasons he “missed,” specifically 2009.

Better late than never, though. In the past four years, Sandgren has soaked up as much Purple and Gold as he possibly can.

On the afternoon I call Sandgren to interview him, he tells me he is listening to the Vikings/Cowboys recap via Andy Carlson’s Purple FTW! podcast while putting his daughter to bed. He sends me screenshots of his phone to show the list of NFL and Vikings podcasts he listens to regularly. I count 13.

When I seem impressed at the list, Sandgren offers a matter-of-fact response.

“Well, you know what it’s like. The sickness that is the NFL and the Vikings.”

Sandgren certainly identifies with the Vikings fan family, even though he’s watching from across the world. He says its hard to find many other Minnesota fans near Stockholm, and the NFL in general does not have a huge draw. People in Sweden wear NFL gear, but they don it more as U.S. souvenirs than as allegiance to a particular team. Sandgren tells me he recently met a man wearing an Oakland Raiders hat, so he struck up a conversation and asked him what he thought of Derek Carr; the supposed Raiders “fan” simply responded with a confused stare, not knowing who Carr was. If he has it his way, however, Sandgren will continue to grow the number of Swedish Vikings fans–even if he can get more people to enjoy watching the NFL in general, he’ll be in good company. He has quite the methods of teaching, too. Prior to Super Bowl XLVIII (which started at midnight in Täby), Sandgren threw a party at his home and conveniently tied it with a football class.

“We had plenty of American foods and drinks for the party, like jerky and root beer–a drink no Swedes can stand,” Sandgren says. “My wife and I build a football field on the living room floor using tape and sticky notes. We then showed simple plays and names and roles of the most prominent stars of that game.”

Sandgren appreciates that his wife enjoys the game with him (at least the ones that don’t air in the middle of the night), and he hopes his daughter, Sigrid, will grow up to be a Vikings fan just like Daddy. So far, she’s off to a great start. It’s fortunate for Sandgren that his family so strongly supports his Vikings obsession, and this year especially. For Sandgren’s birthday in February, his wife gave him the gift of a lifetime—tickets to attend his very first NFL game.

Sandgren will be flying to meet up with the Fends at the Vikings vs. Broncos game in Denver on October 4. He could not be more excited to finally see his team in person. Despite being a Broncos fan, John Fend graciously picked out tickets on the Vikings side of the field: 20 rows up, on the 50-yard line.

“I’m looking forward to sharing the game day experience with [Erik] and just watching him enjoy the game,” Fend says.

You can bet the two friends will be dressed from head to toe in regalia for opposing teams, and there will be plenty of good-natured ribbing.

“He’s really excited to see Teddy and Adrian play, and he’s convinced the Vikings will win the game—delusional I know,” Fend adds. “I’m hoping the Broncos fans we sit near will appreciate his enthusiasm for his team as well. I am so glad he will get to have his first game experience with me […] great memories will take place, and pictures, too.”

As much as Sandgren is looking forward to seeing the Vikings offense take on a skilled Denver squad, he says his favorite players are actually on the defensive end, and he can’t wait to see them in action.

[pull_quote_center]I like the guys that let their game speak the loudest and are quiet guys of the field,” Sandgren tells me. “Harrison Smith has a punishing style and seems to be really cool. [Xavier] Rhodes is like that, too. Looking at the rookie group, I love [Eric] Kendricks, and I just hope he can live up to the expectations that are building.[/pull_quote_center]

As I wrap up my interview with Sandgren, I have two hours of the work day ahead of me; he is at the end of his night. We have different accents, we live thousands of miles away from each other, and yet we are both anxiously awaiting Sept. 14 to watch the Vikings take on San Francisco in the season opener.

This year when I crawl into bed after midnight, I’ll think about my new friend Erik, the most dedicated fan I know, as he stays up half the night to watch his beloved team.