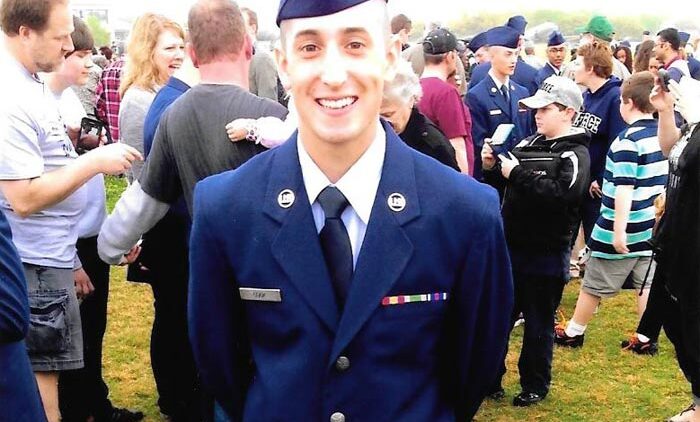 On January 7, 2015, Senior Airman Eli Cook passed away from injuries sustained in a car accident one week prior. He was 22 years old. This feature is dedicated to Eli’s memory, his family, and all those close to him. The middle brother of eight children, Eli Cook was born into a Minnesota Vikings family on Sept. 11, 1992; his father Wayne says that Eli was a Vikings fan from Day One.

“Dad was always watching sports,” explained Eli’s brother Andrew, “and we would always watch with him.”

Eli especially enjoyed watching the Timberwolves and Vikings, and they soon became his favorite of Minnesota’s sports teams. He gained a reputation of being the most athletic in the family, and he often stood out because of his speed. As a middle- and junior-high school student, Eli played quarterback for his team in Wilmar, MN.

Like most sports fans, Eli had a competitive spirit both on and off the field. Friendly competition regularly brewed between the brothers at home, and that passionate edge also came into play when cheering for—and defending—their hometown team.

Being a member of the U.S. Air Force, Eli relocated outside of Minnesota and worked with men and women from all over the country. Wherever he was, though, he was quick to talk up the Vikings. An Air Force friend shared that Eli was a “hardcore trash talker,” constantly ribbing friends who supported rival teams. He was also known for always wearing his Chad Greenway jersey. Eli’s father explained that Eli chose the No. 52 jersey because he worked on a B52 airplane—something he was incredibly proud of. “That plane was his baby,” Andrew said.

Eli’s love for the purple and gold spoke strongly to his character, as Andrew described:

[pull_quote_center]“When Eli left for the Air Force and lived in Texas and Louisiana, he embraced Minnesota sports even more than before—it was a source of pride for his home state. […] Eli had a lot of pride and showed a lot of passion for everything that he did and believed in—whether it was his Air Force career, friends and family, faith, or his roots.”[/pull_quote_center]

Amidst several personality differences that can only be expected between siblings, sports always brought the Cook family together. Some of the most treasured memories include those times of watching, talking about and playing sports together.

“Many times,” Andrew said, “I have gotten together with [Eli] at the excuse of some sporting event.”

Even when away from Minnesota, Eli was never far from family. He was privileged to serve in the Air Force with his brother Caleb, and the two of them were stationed together in Louisiana. During the 2014 season, Caleb and Eli spent game days together at a Buffalo Wild Wings to watch the Vikings.

And just like he learned from his father, Eli desired to pass on the Vikings pride. He enjoyed spending time with his nieces, and Andrew recalled Eli’s most recent visit over Thanksgiving:

“Eli was wearing his Greenway jersey. He said it was his lucky jersey, and that the team hadn’t lost when he wore it. I remember him talking trash about the Packers with my little girls—which of course I approved of.”

In conversations that Eli and Andrew had over the course of the 2014 season, the younger brother expressed nothing but enthusiasm for the Vikings and the direction they were headed. Discussions typically revolved around defense and Eli’s favorite player, safety Harrison Smith.

“We recently talked about the emergence of Anthony Barr, Everson Griffen and Smith and how they are all ‘beasts,’” Andrew recalled. “Eli was super excited about the future of the Vikings.”

While all Vikings fans understand the frustration of losing records and shudder at words like “Gary Anderson” or “2009 NFC Championship,” Eli was a fan who never lost hope. Instead, he held onto a refreshing, consistent optimism for the team.

“Every year, he thought – Super Bowl!” Andrew said, laughing. “Even if realistically he knew it wasn’t true, he would still preach it among his Air Force buddies and on Facebook.”

Prior to the season opener, Eli made the following post on Facebook, demonstrating both his team pride and fun, animated personality:

[pull_quote_center]“The Minnesota Vikings … I’ll be watching you fellas win a Super Bowl from the Middle East in February.* I can’t wait for next Sunday!!! Skol Vikings!! Side note: Caleb Cook and I very much enjoyed being in Louisiana today during a Saints loss. Great feeling! Also, Houston fans are nuts, haha.”[/pull_quote_center]

It was impossible to spend time with Eli without understanding his love for the Vikings. His family and friends will continue to cheer for his beloved team and remember his legacy—hopefully, Vikings fans will one day see Minnesota win the Super Bowl that Eli always believed in.

“Eli was a class act, a proud American Airman, an amazing brother and son, and a loyal Minnesota sports fan. We are so proud of him.” *Eli was scheduled to be deployed overseas this month, on Jan. 20.