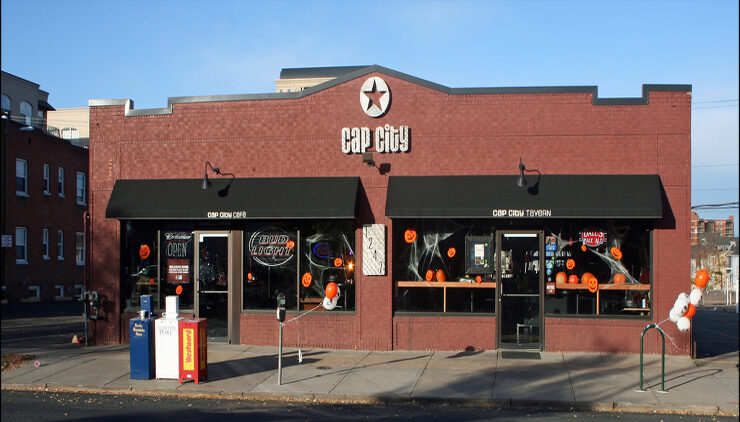 For this week’s Vikings Fan Spotlight, we’re highlighting not just one person, but an entire bar!

Cap City originally opened in 1999, but Dino McTaggart, the bar’s current owner, purchased the establishment in 2008.

Interestingly enough, McTaggart did not start out as a Vikings fan. Rather, he was born and raised in Cleveland and considers himself a Browns fan “deep down in [his] soul.” Before you write him off, though—McTaggart quickly became a Vikings supporter.

“I became a Vikings fan the day Minnesotans started walking thru the door at Cap City, and I fell in love with the people who come in each Sunday to cheer,” McTaggart said. “Everyone who comes into Cap City on Sundays is here to watch football, but even when the Vikings aren’t winning, [the fans] are here to see each other and to get just a little bit of what they’re missing from home […] as I call it, ‘Minnesotan Love.'”

So how did a bar in the heart of Colorado come to be a “Vikings bar”?

When the local Vikings watering hole went out of business in 2010, McTaggart created fliers advertising “Denver’s Newest Vikings Bar”—slowly but surely, Vikings fans from all over found their way to Cap City.

“The final game of the year was against the Packers, and that was the game to get into the playoffs.”

McTaggart recalled the Vikings winning that game with a field goal and then immediately playing Green Bay in the NFC Wild Card game the following week.

[pull_quote_center]”I think every single person in the bar got on social media and raved about Cap City and what a great time they had. The Wild Card game was standing room only, and it has been ever since.”[/pull_quote_center]

John Lind, a lifelong Vikings fan, is a regular customer at Cap City Tavern. Lind moved to Denver for work in 2013, and a friend told him about the bar. Lind says he loves the communal feeling of connecting with other fans despite being away from Minnesota.

“The first time walking in was like a dream come true,” Lind said. “A sea of purple jerseys, the game on every single screen, and an engaged audience […]. I got a full dose of ‘Minnesota Nice’ far away from the Twin Cities.” Unlike other sports bars who often refrain from taking reservations on game days, Cap City Tavern welcomes reservations from groups who want to view Vikings games together. McTaggart refers to some of the recurring clients as “super regulars,” and emphasizes that there are a lot of them!

McTaggart and his family love creating an atmosphere for Vikings fans to spend their afternoons, and they offer plenty of game-day specials just for the purple and gold. Deals include buckets of beer, pitchers, and even $2 purple shots for team spirit.

“We try to keep it inexpensive for our Super Regulars,” the owner explained.

For McTaggart, a family man and enduring sports fan, he can’t think of anything better than running Cap City. His father owned a small restaurant when the family grew up in Ohio, and McTaggart’s goal since a young age was to have his own place. He calls the tavern a “labor of love.”

McTaggart is already anticipating the 2015 season, saying he’s most excited to witness the development of Teddy Bridgewater. The young QB is McTaggart’s favorite player on the current roster, and he can’t wait to see how he leads the Vikings.

[pull_quote_center]”To be a contender, an NFL team needs a premium quarterback,” he said. “I think [Bridgewater] has the talent to become that guy for us, and secretly I look forward to Adrian Peterson coming back.”[/pull_quote_center]

Lind echoed the owner’s enthusiasm, also trusting in Bridgewater to take the Vikings to a postseason appearance and planning to have Peterson stay in Minnesota. He also looks forward to fielding a top-5 NFL defense under Mike Zimmer.

Despite now living in Boulder, Lind hardly ever misses a game at the tavern. He doesn’t hesitate to encourage any Vikings fan who finds him/herself in the Denver area to intentionally plan a visit to the “home away from home.”

“Cap City offers everything a displaced Vikings fan could want in a football experience: plenty of screens, great fans open to making new friends or just watching the game, delicious food, and a full Bloody Mary bar to boot!”