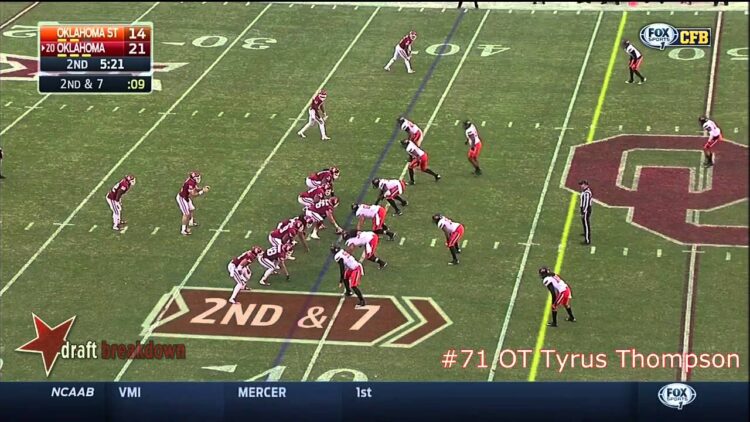 Offensive tackle Tyrus Thompson was selected by the Minnesota Vikings with the 185th overall pick in the sixth round of the 2015 NFL Draft.

The book on Thompson is that he is physically gifted and boasts an NFL frame at 6-5 324 pounds. Great length with 34 7/8 arms and strength in the upper body. Quick hands off the snap who can turn his hips to the hole and lock onto a defender. Thompson, for a big man, looks quick footed and light on his feet. A productive run blocker who Rick Spielman thinks could also project to guard. He is smooth with good laterally movement, who can change directions well and effectively get to the second level with good agility and balance.

Thompson started 29 games over the last three seasons on the Sooners’ offensive line, including all 13 games a year ago. He has extensive experience at left tackle facing the best edge rushers in the Big 12 Conference. Thompson flashes athleticism and enough NFL potential that some evaluators believe he should stay on the outside of the line and compete for a job as a backup swing tackle in the NFL.

Scouts would love to see more consistency and effort from Thompson. He can lose track of his footwork in pass protection and doesn’t always stay square to his defender. Thompson needs to work on better utilizing his long arms, leverage and strength. His effort at times has been questioned as laziness or a lack of passion for the game.

The sky is the limit for Thompson if Zimmer can unlock the upside and add some nastiness to help turn this mammoth man into a true mauler. If Zimmer can find a way to keep his motor running, the Vikings might have the makings of a late round gem.

Thompson was born in Germany while his father was stationed abroad as a paratrooper. He is married to Olivia-Elyse Thompson and has a son named King, and a daughter named Aria-Elyse. Thompson, a four-star recruit out of Texas, has been working hard to provide for his family while juggling the demands of a student athlete.

Ken Sarnoff (Thompson’s agent) had this to say about his client.

“He’s just more adult in every way, shape and form,” Sarnoff said. “I’ve had kids go through this process, and every day they were going to different car dealers to pick out which $80,000 car they were gonna get. That’s about the furthest thing from Tyrus’ mind.

“He’s thinking things like, ‘What’s the cost of living gonna be like?’ and ‘Will this be a good place to raise a family?’ Those are the conversations I’m having with him, as opposed to, ‘Where can I get the best car’ and ‘Where’s the best club?’”

“He’s a man,” Sarnoff said. “He’s not gonna get busted with weed three days before the draft. This guy’s Saturday night is a date night like a 40-year-old guy would have, taking his wife to a movie. His downtime is playing with his kids and watching cartoons.”

There’s absolutely enough talent in the First-Team All-Big 12 offensive lineman for Zimmer and the coaching staff to work with. In 2014, Thompson only gave up one sack despite playing through a foot injury for part of the season. His success at Oklahoma shows that he has the tools and requisite athleticism to play at the next level.

Thompson is capable of delivering a strong punch and punishing blocks when he wants to. At times he can dominate at the point of attack, while other times it appears he is too content to shove a guy once and coast through the play.

There is no question Thompson is more of a waller then a finisher when it comes to identifying his style of play. His struggles are more with the speed rushers like Vic Beasley, yet he shows good success against bigger defensive ends like Baylor’s Shawn Oakman.

Would Thompson make a good guard? Maybe, and I think the Vikings’ coaching staff will certainly give him a good look on the inside of the line at camp. Tackles with limitations on athleticism, length and height usually get projected to guard at the next level, but that is not the case with Thompson. It’s his struggles with speed rushers and consistent effort that will ultimately limit his ability to start as a NFL left tackle.

Thompson hates hearing the knocks about his work ethic. He is quick to point out that that is not really who he is, and that he has played through undisclosed injuries over his career at OU.

How Thompson takes to NFL “coaching-up” will ultimately determine his success in the NFL. Thompson is a bit of a boom or bust prospect, but I love this sixth round pick none-the-less. With T..J Clemmings also on the Vikings roster (drafted in the fourth round), I think taking a look at a talented run blocker like Thompson at guard is a very good idea.