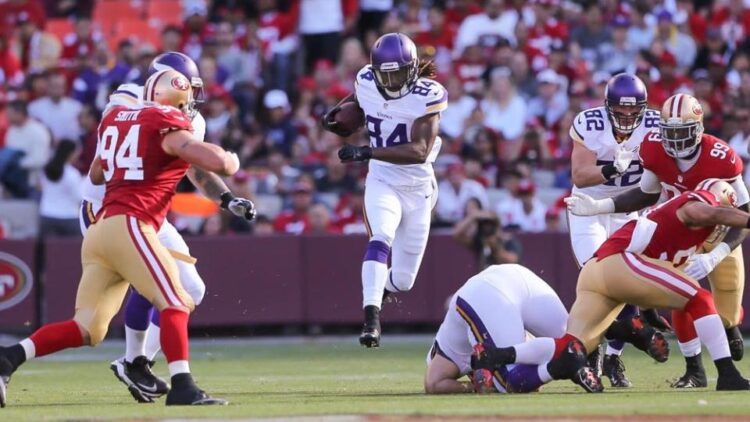 The Vikings will kick off the 2015 regular season in San Francisco, facing the 49ers for Monday Night Football. With Adrian Peterson returning to the field after missing almost all of last season and Teddy Bridgewater heading into his full second year at the helm, the Vikings have several things to feel optimistic about.

Almost all teams experience face lifts during the offseason, but the 49ers in particular underwent extreme adjustments. In addition to gaining a new head coach in Jim Tomsula after Jim Harbaugh left for Michigan, San Francisco lost several players to retirement, off-field issues and free agency.

Let’s take a look at the Week 1 matchup:

All right, let’s start with what is safe to assume will be the Vikings’ biggest concern: the offensive line. Most fans are still reeling from last year’s OL woes, and it appeared early this offseason that 2015 would offer better protection for Bridgewater and company.

Now, heading into Week 1, the Vikings are without starting tackle Phil Loadholt (Achilles) and starting center John Sullivan (back). The news of Sullivan having surgery came abruptly Thursday, after the team had reported for weeks that Sullivan simply suffered from back spasms.

In the absence of Loadholt and Sullivan, the Vikings will be relying on rookie T.J. Clemmings and veteran Joe Berger to fill in, respectively. However, there are a few silver linings: Clemmings has looked decent practicing in Loadholt’s stead, and there’s a lot of potential to grow into. Berger has been practicing with the first team for quite awhile now, and he is not exactly inexperienced. Also, the Vikings have Brandon Fusco back at the line after missing parts of the 2014 season.

The nerve-wracking part comes with the question of depth. Already missing two large pieces, there aren’t many options to pull up if any more injuries befall Minnesota. You’re looking at calling up a practice squad player like David Yankey or Isame Faciane, neither of whom looks ready for any large responsibility. The other option is Jeremiah Sirles, the undrafted free agent from the Chargers who has fewer than 120 snaps under his belt.

While I have a lot of confidence in Bridgewater entering his sophomore season and in Peterson returning to the field, you can bet San Francisco’s defense will be focusing on a weakened offensive line headed straight for Bridgewater.

The 49ers’ offseason has been nothing short of disastrous, between unexpected retirements and legal issues. Perhaps the biggest weapon they have, though, is on defense.

It appears the linebacker has returned with a vengeance. During the 49ers’ second preseason game, Bowman made three tackles in three snaps and sacked Peyton Manning twice in the third.

“Well, I thought he played very well. You know he’s a great player, to go in there, and have time off and do the things that he did coming back from an injury. We’re kind of hoping Adrian does the same thing when he comes back. I think he’s a guy you have to pay special attention to on their defense because he does a lot of really great things for them.”

Last year, Bridgewater found himself thrown into the fire much quicker than anticipated when Matt Cassel suffered an early-season injury. Fortunately for the Vikings, the rookie put up satisfactory numbers in his 12 starts. While he ranked 22nd in the NFL with an 85.2 passer rating, Bridgewater came in at No. 11 with a 64.4 completion percentage.

Bridgewater finished his inaugural season with 2,919 passing yards, 209 rushing yards and 15 total touchdowns (one on the ground). He also threw 12 interceptions. If the offensive line can offer Bridgewater enough time in the pocket, I expect him to do well.

He may be young, but Bridgewater is a smart quarterback who has demonstrated an ability to read the field well. He doesn’t get easily rattled, which will be a major advantage heading into San Francisco behind an offensive line that’s less than proven.

“There’s not too many guys that come into the league that have that talent, especially at the quarterback position,” said teammate Peterson of Bridgewater. “He’s just so poised. He has a great arm. He’s mature. And he’s a competitor.”

San Francisco ranked No. 5 in the NFL for passing defense in 2014 (Minnesota ranked No. 7), finishing the season with 36 sacks and 23 interceptions. Two of the team’s leading players in sacks (both with five in 2014) are no longer with the team: DE Justin Smith entered retirement, and LB Dan Skuta now plays for Jacksonville.

The biggest threats for Bridgewater will be returning linebackers Aaron Lynch and Ahmad Brooks, who notched six sacks apiece in 2014. Brooks is currently listed as questionable for Monday’s game, due to personal reasons.

If the offensive line is the position Minnesota is most concerned about, I think it’s safe to say Vikings fans are feeling equally excited about the team’s rushing potential heading into 2015.

In 2013, the Vikings ranked eighth in the NFL for rushing yards; with the loss of Adrian Peterson last season, they fell to slot No. 14, averaging 112.8 rushing yards per game. They also tied for 14th with 12 rushing touchdowns, nine of which were contributed by Matt Asiata.

Asiata is now slated as the third-string running back, with Peterson back in the starting spot and Jerrick McKinnon filling the second-string role. Peterson has never recorded a season with fewer than 1,200 rushing yards and 10 rushing touchdowns, and most football critics will not be surprised if he fights for a 2,000-yard season after last year’s events.

To Minnesota’s advantage, San Francisco will also be without its leading tackler from 2014. Linebacker Chris Borland announced his retirement following just one season in the NFL. In 2014, Borland managed to finish with 107 total tackles and posed a major threat to offenses across the league.

San Francisco also released LB Aldon Smith during the offseason after he was arrested for hit and run, drunk driving and vandalism in August. Smith proved a strong asset on the outside, and his absence will certainly be felt by the 49ers this year.

Minnesota has some depth at wide receiver heading into the 2015 season. In addition to Charles Johnson, Cordarrelle Patterson, Adam Thielen and Jarius Wright returning, the Vikings also added rookie Stefon Diggs and Mike Wallace (via trade).

I expect at least a couple of deep balls to Wallace via Bridgewater during Monday’s game, especially as Minnesota will want to establish its passing game against a 49ers defense that looks quite different from 2014.

Johnson silently crept to the surface for the Vikings in 2014, coming up with a few big plays toward the end of the season. A versatile receiver with plenty of speed, Johnson could stretch the field and provide Bridgewater another red zone target, especially if Wallace is more heavily defended.

After both teams experienced frustrating 2014 seasons, I have no doubt that they will each take the field with a chip on their shoulder Monday. San Francisco and Minnesota both have concerns heading into this game, but overall the Vikings should hold the upper hand.

The 49ers are still reeling from so many offseason setbacks, and it will take them at least a few weeks to work out the kinks and get used to a new-look roster.

Despite a compromised offensive line, the Vikes have a solid quarterback, deep receiving corps and one of the top three running backs in the NFL.

Between the two squads, Minnesota has won three straight and five of the last sixth meetings. Following Monday night, I fully expect the Vikings to have four consecutive wins over San Francisco.