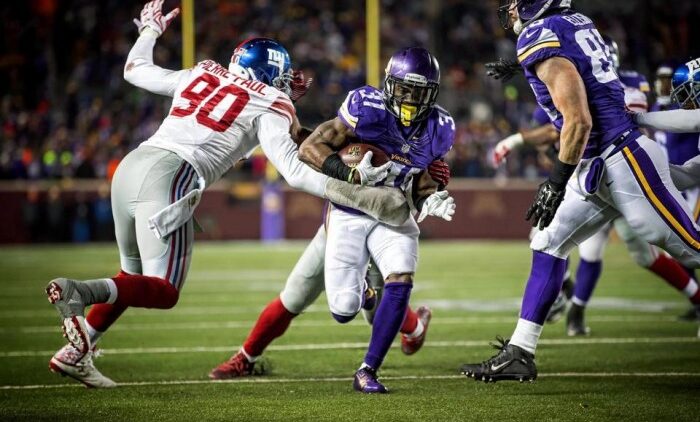 The time has come for the Vikings much anticipated season finale against the rival Green Bay Packers. Before the season, many predicted that the winner of the NFC North would come out of this game and that is exactly what will happen.

The winner of Sunday night’s game will win the division and be rewarded with a home playoff game in the following week. It is even possible that these two teams could meet again next week in the first round of the postseason.

Minnesota’s offense has been on a bit of hot streak in the past couple of weeks. Will they be able to keep it up against a Packers defense that only allowed them to score 13 points in Week 11?

It is a little sad when a good performance for the Vikings offensive line this season is thought of as a game where they only allow their quarterback to be sacked three times. That is how many this unit allowed last week against the New York Giants and also the amount they allowed three weeks ago against the Arizona Cardinals.

Minnesota offensive coordinator Norv Turner is continuing to call more plays that not only benefit the quarterback, but the offensive line as well. Green Bay should be seeing a much different look from the Vikings offense this weekend than they saw from them during their first matchup of the season.

Of course, if Minnesota wants to have a chance at defeating the Packers this week the Vikings offensive line has to avoid a repeat performance from the first meeting against Green Bay. The line allowed a total of six sacks to the Packers defense in Week 11 and that kind of protection usually is not included in the formula to win a game.

Vikings quarterback Teddy Bridgewater cooled down a little bit in last Sunday’s win over the Giants. After passing for almost 600 yards and five touchdowns in his two previous games, Bridgewater threw for only 168 yards and one touchdown.

No need to think that he struggled against the Giants. Minnesota was just playing so well in many other aspects of the game that they did not really need too much from Bridgewater to defeat New York.

To defeat Green Bay this weekend however, the Vikings may need to rely more on Bridgewater to lead them to a victory. Considering the Packers held Minnesota running back Adrian Peterson to only 45 yards rushing in their first meeting this season, it should be expected that Green Bay will do their best to force the Vikings to rely more on their passing game come Sunday night.

Can Bridgewater have a game against the Packers like he did when Minnesota faced off against the Cardinals or the Chicago Bears? Both of Arizona and Chicago’s pass defenses rank higher than Green Bay’s this season, so another strong performance from Bridgewater is not out of the question.

Can anyone explain what is going on with Peterson recently?

Is he hurt? Is it the shift Minnesota has made to run an offense that is no longer built around his abilities?

It seemed to improve a bit in the Giants game (22 carries, 104 yards and one touchdown) but New York’s horrible defense is not a good gauge to judge Peterson with. The Vikings are hoping his performance against the Giants is a kickstart for a better performance in his second meeting against the Packers defense on Sunday night.

It seems like Bridgewater is discovering someone new to throw to as each week has gone by this season. First it was rookie wide receiver Stefon Diggs, then tight end Kyle Rudolph, and now running back Jerick McKinnon has been seeing more passes thrown his way in the recent weeks.

After catching only eight passes in his first 11 games this year, McKinnon has 10 catches in his last four games. It seems as though Minnesota is finally realizing that they have plenty of players on their roster other than wide receivers that can still catch the ball.

Spreading the ball around more is only a positive for everyone involved in the Vikings offense. The more receiving weapons Minnesota has means that the focus for an opposing pass defense has to placed on the entire Vikings offense rather than just one specific player.

Green Bay’s defense has been pretty decent against the pass this season. However, they have allowed over 100 yards receiving to an opposing pass catcher in their last two games and Minnesota will be looking to extend that streak to three come Sunday night.

After the Packers were destroyed by the Cardinals last week, it will be interesting to see how they come out in this game. Meanwhile, the Vikings have been playing some of their best football in the past few weeks and will be looking continue doing just that this weekend.

This game should likely be much closer than the first time these two teams played this season. Minnesota, including head coach Mike Zimmer, seemed a little too excited for that first matchup and he will likely have the Vikings much more focused heading into this game.