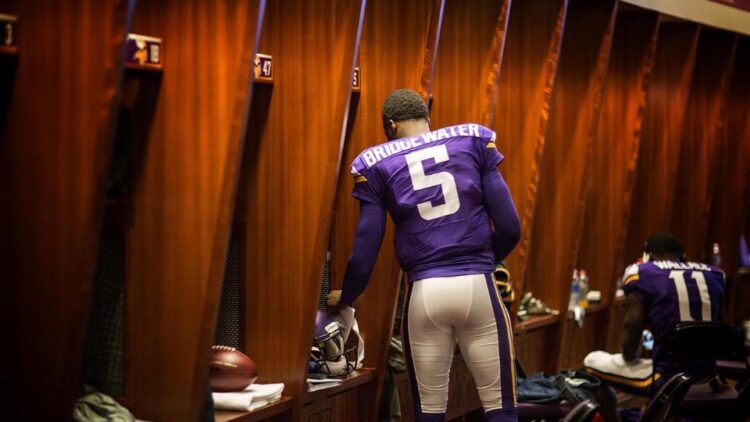 After a Blair Walsh overtime win against St. Louis last week, the Vikings are now 6-2 and tied with Green Bay to lead the NFC North division. The Packers play the Lions this week, which will most likely be another win for Green Bay, so it’s even more important for the Vikings to come away with a victory Sunday.

The Raiders are No. 2 behind Denver in the AFC West division with a 4-4 record. They are coming off a narrow loss to Pittsburgh and will be hungry for a win at home. Derek Carr is averaging 262 passing yards per game and has 19 touchdowns and only four interceptions on the season. Add in the speed and hands of rookie receiver Amari Cooper, and Oakland is no easy contest. Don’t forget, Minnesota is also going against its former offensive coordinator, Bill Musgrave.

Most experts are choosing the Raiders over the Vikings, so Mike Zimmer and his team have something to prove. Lets take a look at how Minnesota’s offense will match up against its opponents in Week 10.

The offensive line allowed only one sack against Teddy Bridgewater last week, although he did receive a decent amount of pressure. There have been pros and cons for the line all season, one of the positives being that the unit has reduced the number of penalties committed after last year. The Vikings as a whole are the least-penalized team in the NFL; as Denver’s Aqib Talib found out last week, penalties can prove significant to a game’s outcome. With Joe Berger looking to be the starting center through the rest of the season in John Sullivan‘s absence, the offensive line has been working to hold its own.

While Oakland used to be known for its defense, the team currently ranks No. 30 in the league (above only the Saints and the Giants). Protecting Bridgewater and blocking against the Raiders will not be like defending the Rams or Broncos, and Minnesota’s O-Line should do well in this situation. The Raiders’ largest threat is linebacker Malcolm Smith; Smith has 59 tackles (50 solo) and three sacks on the season thus far. The line will need to contain Smith in order to keep Minnesota in the game offensively.

Bridgewater has only thrown for 1,670 yards so far, with his biggest game being against Detroit on Oct. 25. Last week’s match up against St. Louis proved mostly defensive for both teams, and Bridgewater finished with only 144 yards passing and a completion percentage of 61.9. The second-year quarterback will need to be on his mark Sunday, especially considering Oakland’s passing defense ranks dead last in the NFL. The Raiders have been allowing their opponents to pass for an average of 314 yards per game. If the offensive line gives Bridgewater the time he needs to throw, this is the week for a breakout game.

One danger to watch out for is the ever-faithful Charles Woodson. At 39 years old, Woodson is still going strong—the safety has 41 tackles (31 solo) and an impressive five interceptions through eight games. Woodson sat out Wednesday’s practice with a sore shoulder, but he returned Thursday and is expected to play against Minnesota.

Even against a tough Rams defense, Adrian Peterson racked up 125 yards and a touchdown last week. In rushing yards allowed per game, Oakland actually ranks No. 7, giving its opponents only an average of 96.9 yards. Offensively, the ground game may be the most difficult for Minnesota Sunday, but you can bet Norv Turner will mix it up a bit and still work to get Peterson on a roll. On a side note, the Vikings will hope that Peterson hangs onto the ball after dropping it twice last week.

Lest you forget, the Raiders just allowed Antonio Brown to make history against them. Although Oakland lost to Pittsburgh by a narrow margin, you wouldn’t know it by Brown’s numbers. The Raiders’ secondary did very little to slow him down, and the receiver recorded an incredible 284 yards by himself Sunday.

Stefon Diggs has been playing extremely well, averaging 92.2 receiving yards per game, and the rookie could be set up for a career game in Week 10. It seems likely that Turner will call some more passing plays against a less-than-reliable Oakland defense; if Bridgewater also finds connections with Mike Wallace and Kyle Rudolph, the Vikings should be able to notch a couple receiving touchdowns.

Offensively, the win against St. Louis was not a smooth one. As Brandon Fusco said, however, “it doesn’t have to be. As long as we have more points than the opponent at the end, that’s all we care about.”

This may be true, but it will be much harder to come out on top of Carr and Co. if Minnesota doesn’t find its way into the end zone more this week. I really could go 50/50 on which team takes the “W” Sunday, but because I think the Vikings have a lot of momentum, I’m giving them the edge.

*if Anthony Barr and Eric Kendricks both miss Sunday’s game, this score might be flipped.