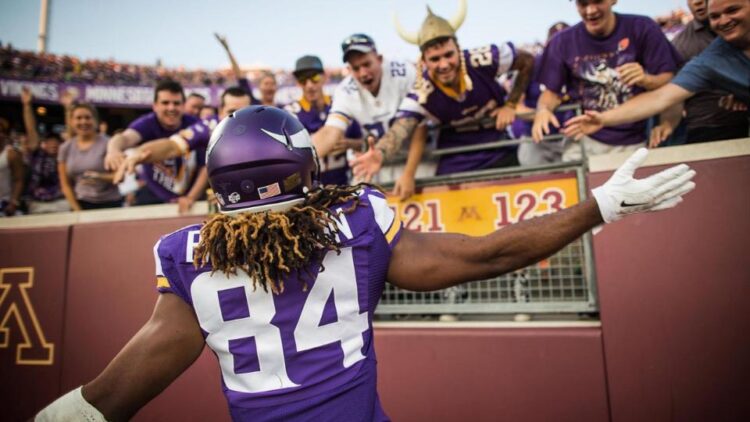 Cordarrelle Patterson stands waiting in the back of the end zone, the heels of his feet hugging the white paint behind him. It’s Week 8 of the 2013 season, and the rookie is already the league’s most dangerous kick returner, averaging 36.5 yards-per-return to start his career.

Opposing teams have quickly learned to kick the ball away from Patterson, but the Packers’ Tim Masthay boots the ball deep, a mistake that will forever live in the Pro Football Hall of Fame. Leaning back, Patterson fields the kick and idles over the goal line, reading his blocking and charting a path through the scrum ahead.

He quickly finds a crease and explodes, following Toby Gerhart up the alley with one hard cut. The burst that made Patterson so exciting his rookie year allows him to run upfield untouched, save for a diving attempt from Packers corner Micah Hyde. With one more plant step and juke, Patterson makes three Packers miss before hitting his fourth gear en route to the end zone.

The play above stands as the longest kick return in NFL history, a 109-yard example of exceptional athleticism and near-perfect blocking. It highlights everything that made Patterson such a threat in the return game his rookie year — speed, vision, a commitment to play design, and aggressiveness.

So what happened? Since making the Packers coverage team look silly, Patterson hasn’t sniffed the end zone on special teams. His yards-per-return have dipped dramatically — from 32.40 in 2013 to 25.62 in 2014 — and he appears more timid, even conservative, with the ball in his hands. Sure, Patterson is responsible for some of regression, but Mike Priefer’s unit must also improve if the Vikings are to return to form in 2015.

Earlier today, Lindsey and the VT team debated which receiver they’d cut if the team could only keep five pass-catchers. A majority chose Patterson, which makes sense given his struggles in the passing game and his dip in production last season. I’d probably make the same choice, but Patterson is like a classic sports car that needs some work under the hood — the potential is through the roof, but the Vikings haven’t fully tapped their young receiver’s abundant talents.

They’ve seen glimpses, though. He’s a threat to score whenever he runs the football and possesses a running back’s vision with the ball in his hands. I don’t believe he’ll ever be an elite wide receiver, but Patterson is an elite return man. As the Star Tribune’s Brian Murphy wrote in June, Vikings special teams coordinator Mike Priefer believes Patterson is the NFL’s best kick returner:

[quote_center]”In my mind, Cordarrelle Patterson’s the best kick returner in this league, so it would be crazy for me to put someone else in that spot.”[/quote_center]

Some of the greatest return men of all time, like Devin Hester and Dante Hall, were second and fifth-round draft picks whose impact dramatically changed games for their respective teams. They outperformed their draft positions, while Patterson has yet to live up to his potential. Still, his added value in special teams cannot be ignored.

Per Andrew Krammer and Football Outsiders,  the Vikings led the league with a starting field position at the 26-yard line (after kickoffs) in 2013, more than a 1.5-yard increase over the second-place Kansas City Chiefs (24.2). Last season, the Vikings started drives at the 25-yard line, finishing just behind the Cincinnati Bengals for the second-best mark in the league. On paper, the number doesn’t look drastically different, but the film from 2014 reveals a much different story.

Take this return from the Vikings’ Week 14 matchup with the Jets last season:

The blocking sets up for what appears to be a Return-Middle, designed for Patterson to follow the wedge down the right hash marks. Instead of hitting a slight crease to his left, Patterson bounces the play to the right and is met at the 15 yard-line by multiple Jets defenders. I won’t place full responsibility on Patterson for the failure of this return, as the play appeared to be doomed from the start.

As soon as the wedge forms, three Jets players are running free through the Vikings’ blockers. It’s not a poorly-designed play, but a series of poorly-executed blocks and a bad decision by Patterson that gives the Vikings offense terrible starting field position. During the Vikings’ bye-week last year, Patterson reflected on his struggles, per Brian Hall:

“It’s been a struggle for me these couple weeks on kickoff return,” Patterson said. “I’ve been seeing the seam there. I’ve been taking some out I should have took a knee, and just things like that. You just got to not do things like that.”

Unlike 2013, Patterson appeared hesitant and slower to hit the wedge in 2014. Like a running back, though, Patterson needs to master the art of pressing the hole — reading his blocks before making a decision to “go.” It seemed as though Patterson struggled to find the balance, often bouncing plays before they developed or choosing the wrong seam and killing a return instantly.

In the same interview with Hall, Priefer blamed Patterson’s dwindling returns on a lack of chemistry:

“He’s making the right reads on the returns, yes,” Priefer said. “On a couple of decisions bringing the ball out of the end zone, that’s partly my fault because I’ve coached him to be aggressive; and partly, a couple times, it’s been his decision that he probably should’ve kept those in.”

Here’s another example, this time, from the Vikings’ Week 9 game against the Washington Redskins

As soon as the ball is kicked, it’s clear that the Vikings are setting up for a Return-Right. Patterson should follow the wedge and blocking toward the middle of the field, but makes an abrupt cut toward the sideline (and three waiting Redskins defenders.) The point of this return is to wall-off  the right side of the field and create an alley in between the numbers and the hashes.

Aside from the free gunner flying down the field, the blocking looks sound, and Patterson has a slight chance to break a big return if he continues on the drawn-up path. The gunner is unaccounted for and disrupts the structure of the play, but Patterson’s decision to freelance ruins any chance at decent field position.

Examples like the one above were all too common last year, and highlighted two of the Vikings’ biggest problems as a return unit — Patterson’s on-the-fly adjustments and poor blocking/missed assignments up front. Though two preseason games, these problems are still surfacing.

Here, in the Vikings’ Hall of Fame Game opener against the Steelers, Patterson is tackled for a minimal gain at the 18 yard-line. Why?

To start, the wedge looks slow in forming a wall and engaging their defenders. Returners are taught to communicate with their blockers, often yelling “Go! Go! Go!,” but there appears to be some hesitation from the right side.

Without knowing the play call, McKinnon and Pruitt double-team the Steelers’ No. 33, giving No. 18 a free shot at Patterson. He makes the play, and Patterson is stopped well-short of the 20 yard-line. If I were to guess — we don’t have the luxury of knowing every assignment — Pruitt should have disengaged and blocked No. 18. While it may not have sprung Patterson, it would’ve given him more room to work with up the sideline. Still, the Vikings look out of place up the field and the play didn’t have much potential from the start.

On Wednesday, Pfiefer addressed the media and elaborated on the team’s issues during kick returns, specifically pointing to bad timing and blocking:

“I thinks it’s more timing than anything. The front line blocking has been okay, a couple of misses there the other night. The backline and the returner, the timing is off. It’s not the returner, it’s more the backline and the wedge guys, we call them the backline, the timing is not quite where it needs to be and so we worked on it yesterday, we’re going to work on it again tomorrow and continue getting better in that regard.”

His quote comes after the team’s second preseason game against the Buccaneers. The problems we saw during the Hall of Fame game appeared to rear their ugly heads last Saturday:

While not as severe, the main issue with this return is a missed blocked by rookie defensive end Danielle Hunter. He’s in the middle of the wedge and is slow to react, as MyCole Pruitt was the previous week. His man has a free shot on Cordarrelle Patterson and puts a stop to what has the potential to be a big return. Below, a look at the solid blocking on the front line: Three blocks on the frontline look to spring Patterson, but Hunter’s man makes the tackle as he hits the hole

If Hunter gets a better piece of his defender, the blocking ahead of him, especially the seal from Thielen, is excellent. As Pfiefer mentioned, the timing is off, but these are problems that can be fixed with each practice and preseason game. I like the aggressiveness of Patterson’s returns, and I think he’s done an excellent job finding a crease and hitting the holes he’s seeing.

Yes, he needs to make better decisions; the new kickoff rules, which increased touchback percentages from 11.3 percent in 1994-2010 to 45.5 percent in 2011-2013, mean Patterson’s opportunities to make an impact are coming less and less. The woes of the kick return unit are not all on Patterson, though. Blocking needs to improve, and new additions and rookies on the unit will have to step up to spring Patterson in 2015.

What do you think? Can Patterson return to form this season, or will he continue to struggle on special teams?