Cause For Concern With Teddy? 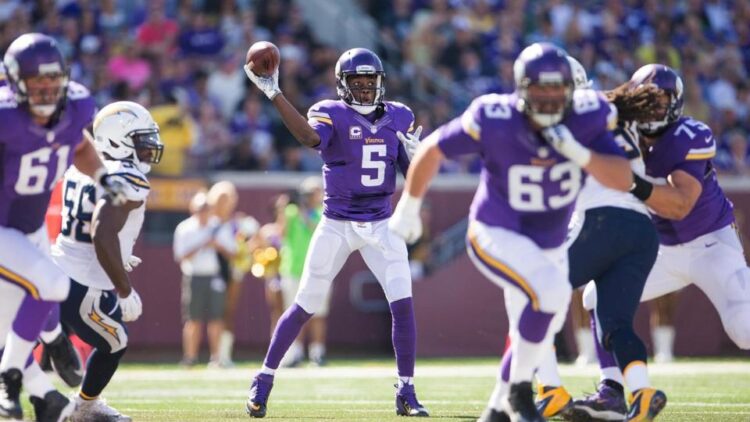 Three games into the 2015 season, the Vikings are 2-1 and most fans would be delighted with the current state heading to Denver in week four.

The defense has played well after a poor showing against San Francisco and have put a beating on both Matthew Stafford and Philip Rivers in consecutive weeks. Offensively, Adrian Peterson leads the league in rushing and has proven yet again he can make big plays.

If there is a reason to be concerned about this team heading to Denver to face the leagues top ranked defense, it is the play of second year quarterback Teddy Bridgewater.

With expectations of Bridgewater at an all time high prior to the start of the season, Bridgewater has some up and down moments and has yet to take full reign of the Vikings passing game.

After taking a look at some key plays from Sunday, I think there are a few areas that will help Teddy get back on track.

Bridgewater completed only 54% of his passes on Sunday, his poorest showing as a pro and you don’t have to look hard to find the reason why. Typically good against the blitz, Bridgewater didn’t look comfortable against the Chargers. You can see this very clearly in his first 3rd down of the game.

Although there is pressure up the middle, Teddy does have the opportunity to drive the ball of his back foot and throw a strike to Jarius Wright. Yes Bridgewater is going to take a hit if he hangs in there, but this should be a fairly easy 1st down in the NFl.


Throws off the back foot are dangerous not only for being prone to interceptions, but also for potentially exposing your receiver to a big hit across the middle. On top of that, they rarely provide an opportunity for yards after the catch.

When Bridgewater can set himself in the pocket, there is no doubt about his ability to make a good throw. He completed the following pass to Mike Wallace.


The obvious difference between the two plays is the pressure Bridgewater feels. San Diego does bring an extra pass rusher, but the offensive line handles it nicely and Teddy is clearly more comfortable here and isn’t feeling rushed.

What is more concerning is when Bridgewater makes a throw shown below. Even with the clean pocket, Bridgewater kind of short arms this ball and the odd delivery keeps the nose of the football up and the pass sails.

This is a great example of where I’d like to see Teddy drive the ball with authority. He’s done so in the past, it’s hard to identify what is causing these minor regressions.

I think there is an opportunity to use Bridgewater in a way that better suits his strengths. Yes, he should make all of the throws shown previously, but it’s hard not to like this pass to Wright in the 2nd quarter.

Bridgewater made two nice throws on the Vikings longest drive where he was 5 of 5 for 48 yards. I’d like to see additional play calling like this. It utilizes Bridgewater’s keen ability to throw on the run and had the entire defense flowing away from the targeted area of the field.

The pass to Wright is the kind of creativity that I thought offensive coordinator Norv Turner would bring to the Vikings offense.

This was the best drive of the day for the Vikings and prior to the Wright completion, Bridgewater connected on a dart to Mike Wallace along the sideline. Little doubt in my mind that this is Teddy’s best throw of the day.


Likely an unnamed key in this play, Matt Asiata gets the better end of a pass block, but does keep the defender out of Bridgewater’s way.

Through his first 16 games, Bridgewater seems much more comfortable throwing the ball to the boundary than he is seam routes or middle of the field. This is highlighted with the throw to MyCole Pruitt and it should look somewhat familiar.

Although not the exact same play, the Vikings ran something similar in their preseason game against Oakland and both times the result was the same.


Teddy should have made the throw to Rudolph in the preseason. The throw to Pruitt is much more difficult due to the defense, but I think there is an opportunity to complete the pass. It’s difficult to place blame on a quarterback when the ball hits the receivers hands, but it’s clear neither throw is ideal.

My point isn’t to place blame, but more to highlight the fact that throwing to the middle of the field doesn’t seem like it’s a strength for Bridgewater at this time, but that doesn’t mean it can’t be in the future.

After reviewing Sunday’s game, there are three areas that the Vikings need to address if they want to get Teddy back on track.

Norv and Scott Turner should immediately work with Teddy to get back to the fundamentals. Teddy is so good at reading defenses and unusually calm in the pocket that we forget he’s a second year quarterback. He’ll still have times where he will throw off his back foot, drop his elbow on a throw or ultimately not set himself properly. The sooner those tweaks are ironed out, the sooner Teddy’s throws become more accurate. In my opinion, this is the biggest area of concern for myself. Thankfully, it is something that is very correctable.

The pass blocking has been hit and miss. It’s one thing for Teddy to recognize a blitz prior to the snap, it’s another to actually have enough time to let a route develop. I think there is an opportunity for additional shot gun formations, maybe even plays out of the pistol that will give Bridgewater additional time to make his progressions. Oddly enough, Bridgewater has yet to be hit while throwing. It’s clear the Vikings are looking to get the ball out quickly.

If anyone is wondering why Bridgewater hasn’t pushed the ball downfield more often, it’s because the Vikings haven’t run many plays that would provide that opportunity. When they did Sunday, Teddy threw two really nice passes that should be caught.

Additionally, there is an opportunity to buy more time for Bridgewater by letting him move from the pocket and throw on the run more often. Not only does this play into Bridgewater’s strengths, but it buys him more time.

A few years ago, Aaron Rodgers and the Packers came to town with a decimated offensive line. I remember leading up to that game there was a lot of talk about the Vikings defensive line getting to Rodgers often. The Packers decided to roll Rodgers out away from the pressure all day and the Vikings never had the time to get to the quarterback. I think the Vikings have an opportunity to do something similar.

Let’s face it, the Vikings won 31-14 and probably have few complaints with a victory. They also haven’t asked Bridgewater to do a lot at this point, relying heavily on Adrian Peterson and the defense. This isn’t a call for drastic changes to the offense, it’s about understanding Bridgewater’s uncanny showing vs. the Chargers.

There is plenty of banter about Bridgewater regressing in his second year and all of that talk is plenty premature. At the end of the day, the Vikings are catering the offense to the leagues leading rusher while letting their defense control the tempo of the came and field position. Why mess with success?