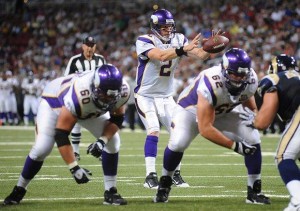 Although Rosenfels’ career did not spend much time in the spotlight, his dynamic personality and leadership—both on and off the field—had a significant impact in the league and especially during his time here in Minnesota.

During the decade that Rosenfels spent in the NFL (2002-2012), he occupied five different rosters and played under several offenses and coaching systems. Although he never served full time in a starting role, Rosenfels gained the insight, skills and leadership that made him a valuable element for any squad.

A well-rounded athlete, Rosenfels attended Maquotketa (Iowa) Community High School where he lettered not only in football but also basketball, baseball, tennis and track. Rosenfels knew he would need to narrow his focus, however; after his final season of football, the highschool senior sat down with his parents and discussed which sport he should play in college. Physically, Rosenfels was built for football—he and his family agreed that it was the sport he would be most successful in.

“I loved basketball, but we knew I wouldn’t improve [on that] much more,” Rosenfels said. “We felt I had a lot of untapped potential in football.”[1] Soon after the discussion with his parents, a scholarship offer from Iowa State sealed the deal.

Rosenfels played four different positions while in high school, filling roles on both sides of the field. He taught himself to kick and punt as a sophomore, and he also dabbled a bit at corner and safety. “But let’s just say tackling was not my strength,” he quipped.

“Coming from a small town, a lot of players played both ways, as there are only so many good athletes on a team,” Rosenfels explained. He always knew that QB was the position he wanted to play permanently, though, and it was at that position that Iowa State recruited him.

While at ISU, Rosenfels led the Cyclones to an 8-3 record in 2000. He was a two-year starter, playing a key role in wins against major opponents like Iowa, Kansas and Colorado. The Cyclones played in the Insight.com Bowl in Phoenix that same season, and Rosenfels led the team to the first bowl victory in ISU history. His 308 yards and two touchdowns earned him the Offensive MVP title.

Rosenfels was a “quiet success” story in college. In fact, he was defined in a 2000 article as one of the top NFL prospects among senior QB’s—The Gazette’s Jim Ecker listed him alongside Drew Brees. When Rosenfels entered the Draft in 2001, however, many NFL Scouts weren’t sure how soon he would be picked up. Rosenfels fell to the fourth round of the draft. He was the sixth quarterback selected in a draft with premier talent at that position, including Brees and Michael Vick.

The Redskins traded Rosenfels for a 2003 draft pick before the 22-year-old made his official NFL debut with Miami. In his second season as third string, he made the first start of his career. The game was a memorable one. Less than 30 seconds into the contest against Baltimore, Rosenfels threw a touchdown for 76 yards, tying for the eighth-longest pass of the season. Although the QB didn’t permanently take the helm, he did cement himself as a reliable backup – he played four seasons with the Dolphins, having opportunities to step in for Jay Fiedler (2002-2004) or Gus Frerotte (2005).

In addition to his stint in Miami, Rosenfels also spent three seasons in Houston, one season with Minnesota, and one season with New York (Giants) before retiring in 2012.

Naturally, Vikings fans will remember Rosenfels’ time in Minny for the 2009-2010 season. Returning to the midwest proved significant for the QB’s career. Unfortunately for Rosenfels, it was significant in the wrong direction.

When Rosenfels donned the purple and gold, it was anticipated that he would compete against Tavaris Jackson for the starting spot. Neither Jackson nor Rosenfels expected the turn of events when Minnesota brought in veteran QB—and long-term Minnesota rival—Brett Favre. Despite delivering strong pre-season performances, Rosenfels dropped overnight from contending starter to the third-string position.

“I think the [Vikings] had reasons to make the decisions they made,” Rosenfels said. “I could only control how I played […] I wasn’t in control of the depth chart, so I tried to make the most of being Number Three.”

The retired QB calls that year the “beginning of the end of my career” —After 2009, Rosenfels never threw another NFL pass in a regular-season game.

Rosenfels did accept his role as backup, though, and he became a behind-the-scenes leader for the team during an incredibly dynamic season. Rather than resenting Favre for becoming the automatic starter, Rosenfels enjoyed being teammates with the veteran and helping him out when he could.

“I tried not to sulk in my role,” Rosenfels said. “Instead, I tried to make the most of it, and that was helping Brett with some of my thoughts from being in different offenses and being around different coaches.”

The two QB’s got along well, and Rosenfels’ experience across the league translated well to Favre in tough situations. It’s clear when one talks to Rosenfels today that he holds a great amount of respect for Favre. “I enjoyed [Favre’s] personality,” he commented. “He kept the locker room light and was the toughest player I ever played with.”

Rosenfels spent all 16 weeks in a supporting role, and neither he nor a single Vikings fan will forget the conclusion of the 2009 season:

Minnesota falling to New Orleans in the NFC Championship game.

Favre brutally targeted in what later came to be known as the “bounty controversy.”

And although never stepping onto the turf, the game proved just as memorable—and painful—for Rosenfels as it did for any of the starting players that day. He later explained how he was able to “assist” at the QB position from behind the scenes.

“Brett thinks about football differently from most players and coaches, and it took me most of the ﬁrst half of the season to understand how. At times I felt like I was an interpreter between Brett and our offensive coordinator, Darrell Bevell, despite them having worked together for almost a decade.”[2]

Rosenfels reflected on the events just a few days afterward, and Sports Illustrated EDGE ran the story last year. Since that time, countless NFL fans have read the recount of that game from the perspective of Rosenfels, who prefaced the report in this way: “In all my experiences in professional football, [that game] best encompasses the true soul of what the NFL is.”[3]

Rosenfels’ detailed account of the game allowed fans to imagine the raw emotion and intensity the players felt at the Superdome that day. Many fans want to know if Rosenfels will continue to write and deliver similar pieces.

“I’ve never been much of a writer,” he admitted, “but it’s something I’ve dabbled with since my retirement […]. Only so many people have seen all that goes on behind the curtain, and I enjoy sharing some of those stories.”

The NFC Championship story shares Rosenfels’ experience with fans, but it also reflects his innate love for the game of football—whether he’s on the field, on the sidelines, or offering opinion and analysis.

Fans can experience Rosenfels’ expertise not only through his writing but also on the radio. The retired QB has been featured through several media outlets, including Paul Allen’s program on KFAN. Rosenfels said he enjoys “talking the game” and sharing knowledge he gained while in the league. “PA has great questions, and his intensity makes you want to have great answers all the time. He has the ability to keep it serious and light at the same time.”

Rosenfels is a man of opinions across all mediums, including social media. Those who follow the former QB on Twitter are accustomed to a healthy blend of football commentary, analysis and sarcasm.

Minnesota fans and Twitter followers are eager to know what a former Viking thinks about the team’s current direction. As backup quarterbacks are often exposed to dialogue that occurs between the players and coaching staff, Rosenfels likely understands the pulse and operations within the organization.

“I honestly do believe [Mike Zimmer] is an excellent hire. His defenses were always sound, aggressive, and well coached. Combine that with the fact his players absolutely loved playing with him, and you have the ingredients of a good head coach.” He adds, “I have played for or know every coach on the offensive staff, and I will say [Zimmer] did an excellent job putting together a good group of coaches.”

And as far as the upcoming NFL Draft and where the Vikings should focus their picks? Rosenfels described the quarterback as being the biggest challenge for teams to figure out. Unless a team already possesses a franchise guy, “it’s a complex position that seems to have a lot more failures than success stories.” The quarterback position has undoubtedly been a struggle for Minnesota since ’09, and there are plenty of rumors floating around about what action the team will take during the offseason. Rosenfels offered his thoughts:

“I don’t know much about [Johnny] Manziel other than he reminds me of a 2014 version of Doug Flutie. I don’t worry about his size as much as many people; there is advantage to being a taller QB. How thick and bulky he is, is more of a concern. It’s easy to get beat up in the NFL, and having short but strong guys like Russell Wilson increase your likelihood of staying healthy. As Bud Grant said, ‘a player’s best ability is his availability.’”

[1] All quotes, unless otherwise specified, are taken from direct communication with Sage Rosenfels.