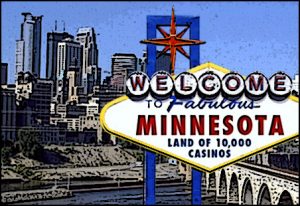 I haven’t paid taxes in Minnesota for nearly a decade now (wow, time flies) so I try to avoid sticking my nose into the State’s affairs, especially when it involves the money of Minnesota taxpayers.  In fact, on this blog, I try to avoid political topics all together.

With this post I break both of those pseudo-rules, but I will try to do it tactfully.

As fans log onto their work computers Thursday they will likely be bombarded with news about a bill being introduced to the State Legislature that could/would/should get a new stadium built within their borders to ensure the Vikings don’t abandon the nest for at least another 30 years.

At the time I am writing this, no details have emerged detailing how the State would finance the public portion of this stadium, but all indications are that this Republican Legislature understandably has no interest in raising taxes.  Thus, it appears likely that some sort of gambling deal will be the answer.

Now, I am a huge supporter of keeping the Vikings in Minnesota, but I just cannot reconcile in my mind why Minnesota voters would want to increase the gambling platform to pay for this thing.

The whole point of not raising taxes is nobody wants more money taken out of their pocket by a Government that is already taking a decent share.

And that is the thing about gambling.  Every penny will come directly out of the pockets of actual people, residents, voters, and visitors.  Grandmas, Grandpas, Brothers, Mothers, Fathers, and Daughters will be picking up this tab with the money they are literally taking out of their pocket and placing into the State’s coffers.

Each of those groups would have to pay their fair share of property taxes, sales taxes, income taxes, and a number of other tax structures.

The fact is, if gambling is selected to be the primary funding source for this public portion, then one hundred percent of that burden will be placed on the individuals that participate in what is widely regarded as the “Stupid Tax.”

Politicians are scared to death of raising taxes and they can easily sell gambling to the masses by labeling it as a “choice.”  It can be argued that, for some people, gambling is no more of a choice for someone than it would be to pay two cents of sales tax on a pack of gum.

The “choice” that people have to make to spend money on gambling efforts, however, is exactly what creates one of the most volatile sources of revenue ever concocted.

According to a recent study by the Rockefeller Institute of Government, there is a nationwide gap between the promises made about gambling revenue amounts and what is actually created.  Several gambling expansions in the U.S. since 2002 have fallen short of their stated goals, and some haven’t even created 50% of the revenue originally promised.  For every one gambling expansion that hit its mark, five others fell short.

The economic recession over the last few years has led to a number of states turning to gambling for a quick and easy form of revenue.  The competitive market presents problems for those that try to project revenues, especially in the long term.

“Gambling in its current form has reached a saturation,” the Institute’s Lucy Dadayan said. “No doubt, further expansion of gambling will lead to a relatively rapid growth in revenues and high profit margins. But such growth is not sustainable and is short-lived.”

University of Las Vegas gaming researcher David Schwartz warns that new casinos might produce revenue, but large portions of that revenue often comes from other casinos, which creates a “rob Peter to pay Paul” type of scenario.

Minnesota itself is a prime example of how tough it can be to create sustained revenue from gambling sources.  The last major expansion of gambling in Minnesota came with the opening of Running Aces race track in Anoka County in 2008.

Thus, making gaming the primary funding source for this stadium is a gamble in and of itself.

If a person is too poor to buy that new Silverado, there isn’t a financial advisor in the world that would advise that person to head to the casino to raise funds for the vehicle.  Perhaps, if the tax revenue isn’t there and a $323 million surplus is already spent, then the State should consider not placing such a risky bet… with your money.

After all, the house always wins.

[Okay, I’m off my soap box, Minnesota.  Sorry for meddling in your matters.  Feel free to pay me back by telling my State what they should do with the Arctic National Wildlife Refuge.  We’re used to it.]