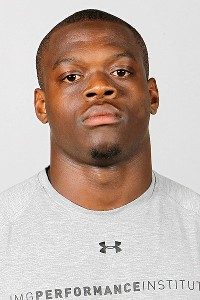 Today, the 2012 NFL Combine featured Andrew Luck and Robert Griffin. Yeah, there were some other guys there, too. You know, those other quarterbacks, wide receivers and running backs (whatever those guys do in this “passing league”). Primarily, though, it was just a love fest for Luck and Griffin – this year’s two top quarterback prospects. Griffin wowed everyone with his great 40 time and athleticism. Luck wowed everyone with his great 40 time and athleticism. There was another guy though that managed to break into the spotlight meant solely Luck and Griffin. Someone who could very likely still be on the board when the Vikings have their second pick in the second round – Stephen Hill, a wide receiver out of Georgia Tech.

Stephen Hill, at 6’4”, 215 lbs., ran a blazing [official] 4.36 in the 40 yard dash today at the combine, very likely making him one of the most legitimate deep threat wide outs in this draft class. Hill averaged 29.3 yards per reception this year (more than any other receiver in college football) for a total of 820 yards. He has long arms, a huge catch radius and consistently blows by coverages on deep routes. Hill is also an above average blocker who comes from an offense that requires that skill set.

Sound like something the Vikings may need? I think so. Continue reading as we look a little closer at Hill.

With every day that we get closer to the NFL Draft, it seems more and more likely that the Vikings will land Matt Kalil and fill a huge need on the offensive line. And with the pool of available, #1 free agent wide receivers getting smaller every day, the Vikings may have to use the draft to address their need at wide receiver. While Stephen Hill’s draft value could potentially rise after today’s showing, most boards have him going somewhere in the second round. Meaning, he could very well be available when the Vikings make their second selection of the draft.

Now for the bad part: Though Hill is an incredible athlete who is already drawing comparisons to Randy Moss (and not for any behavioral reasons…), he does come with some weaknesses (sorry, not everyone can be Andrew Luck). According to the analysis NFL.com has put together, Hill has just average acceleration, not much experience running complex routes and has a hard time finding soft spots in coverages. In my opinion, though, with the addition of someone who could really stretch the field, Percy Harvin becomes the slot receiver he’s meant to be and takes on the more complex routes and reading coverages.

With a little work and improvement, Stephen Hill could be the #1 receiver the Vikings are looking to acquire. If he’s available when it comes time for the Vikings to make their second pick of the draft, I believe Hill should seriously be considered.

Check out the Stephen Hill info and highlight video below then let us know what you think!