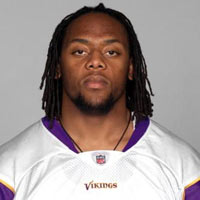 (Sorry we didn’t provide any update on this news yesterday – Adam is a under the weather and I was gone all day on a business trip.)

I assume most of you know now that yesterday, the Vikings re-signed linebacker Erin Henderson and wide receiver Devin Aromashodu.

Erin Henderson, who had taken to Twitter to express his frustration with the lack of contract talks with the Minnesota Vikings, was signed to a one-year, 2 million dollar deal. Henderson, considered to be of a top 5 linebacker in this year’s free agency by some, did not play every down last year and still managed to record 70 tackles, 1.5 sacks and two forced fumbles. He is young, coming out of his first contract and has lots of potential to be great (exactly what Spielman says he is looking for).

Erin Henderson only being signed for one year is good in some ways and bad in others. Although we happened to obtain Henderson’s services on the cheap for another year, if he does have a breakout season, we will most definitely have to pay him a greater amount when he becomes a free agent again next year. But, if he is good, he deserves good money – so it allows the Vikings to really gauge the somewhat unproven but promising linebacker. It should serve as a great incentive for Henderson to go out there and really push to make a difference. Essentially, Henderson has been tasked with proving that he’s worth the amount he expects.

Devin Aromashodu’s re-signing is really no surprise considering the Vikings haven’t made any signings to address the need at wide receiver [so far] this offseason. Aromashodu only had three games last season where he had over two receptions, but as Jeremy Fowler reports, the 27 year-old’s real value comes from the fact that he averaged 18.1 yards a reception.

Aromashodu, like Erin Henderson, was also signed to a one-year deal. I imagine both players will get increased playing time this year to prove if they have more value to the team before they become free agents again. Currently, Aromashodu would probably be the third receiver on the depth chart behind Percy Harvin and Michael Jenkins. It is probable he will be 4th after the draft considering the likelihood of the Vikings selecting a wide receiver somewhere in the first three rounds this year.

It’s great that we managed to lock-in two young players with the potential to improve at their positions. Unfortunately, the decision to only sign one-year contracts could really come back to bite us if both players manage to have the good year we hope they have.