Uh-oh. After an excellent season aided by a mostly healthy team, the injury bug is striking the Vikings in an area that has been problematic in recent years — the offensive line.

The calf injury and partially torn Achilles tendon that landed Brian O’Neill on injured reserve this week is a huge concern. O’Neill will be replaced come playoff time by either Blake Brandel who is expected back for the playoffs from his knee injury or Oli Udoh who replaced O’Neill in Green Bay and will start at right tackle in Chicago on Sunday.

And the loss of No. 2 center Austin Schlottmann also is a problem if Garrett Bradbury isn’t able to return for the playoffs or if he reinjures his back during a game or practice, but Chris Reed should be better with more practice reps and with a full game this Sunday against the Bears after his shaky performance in Green Bay. O’Connell said Wednesday he expects Bradbury to return “soon,” which probably won’t be in Chicago, but there’s a decent chance he’ll start in the first playoff game.

The team has added a veteran center for more depth at the position in Greg Mancz, who has 32 career starts and was with the Browns this season. They also signed tackle Bobby Evans to the practice squad. He’s a former third-rounder who started four games for the Rams this season before being released recently.

I think O’Neill and Christian Darrisaw are Pro Bowl-caliber tackles, so O’Neill is a big loss to the Vikings offense. The Vikings coaches have to be concerned as they look ahead to potential NFC playoff matchups with the Giants and Kayvon Thibodeaux, the 49ers with Nick Bosa, and the Eagles with their many strong edge rushers (along with Dallas’ Micah Parsons and DeMarcus Lawrence). It was going to be a big challenge with the O-line intact, and it’s now a more difficult task to give Kirk Cousins time to hit his excellent receiving corps and establish a running attack in front of Dalvin Cook.

It is positive that O’Connell says there’s a “very good chance” Brandel will be back for the playoff opener. He played reasonably well in his three starts this season while Darrisaw was in concussion protocol.

In any event, it will be all hands on deck with tight ends, running backs, and receivers asked to help protect Cousins and set up Cook’s runs. And the defense will have to tighten up and force turnovers.

First things first before playoff time, the Vikings head to Chicago with the No. 2 seed still possible but not likely since the 49ers will clinch the spot with a home win over 4-12 Arizona, who is without starting QB Kyler Murray (ACL tear) so ex-Viking David Blough is the likely starter. The Bears are sitting Justin Fields, which is good news for the Vikings defenders, who won’t have to chase an elusive QB with 1,143 rushing yards this season. Nathan Peterman, with a 1-3 career record as a starter (3 TDs, 13 interceptions), gets the start.

Here are my keys to the Vikings beating the Bears and escaping with no more injuries:

1. Build an early lead with most of the starters and then get the starters out in the second half. I don’t expect O’Connell to play important players with an injury history, such as Cook, Danielle Hunter,  Za’Darius Smith, Eric Kendricks, and Harrison Smith. I would sit Justin Jefferson and Adam Thielen since it’s unlikely the 49ers will blow their chance to hold the No. 2 seed. And Cousins should be pulled after a quarter or so.

2. Run the ball: the Bears rank No. 31 against the run and just gave up 268 rushing yards to Detroit in a 41-10 defeat. Cook ran for 94 yards and 2 TDs in the Vikings’ 29-22 home victory over the Bears on October 9. As I said, I’d sit Cook and let Alexander Mattison, Kene Nwangwu, and Ty Chandler run the ball a lot.

3. Cue up the quick passing game: with the O-line issues, Cousins most likely won’t have time for deep drops in the playoffs, so this is a good week to work on the quick stuff to guys like K.J. Osborn, Jalen Reagor, and T.J. Hockenson as long as he’s in there. As I said, it’s probably best to keep J.J. and Thielen on the sideline this week.

4. Stop the run: The Vikings did an excellent job in run defense last time against the Bears, holding David Montgomery and Khalil Herbert to 31 yards combined on 16 carries. Stopping those two runners will be a good warmup before possibly facing a top back in Saquon Barkley in the wildcard round and then perhaps Christian McCaffrey in the divisional playoff. And not having to worry about Fields’ running is a big plus for the Vikings D.

5. Pressure a shaky QB in Peterman who is apt to turn it over: the Vikings pass rush wasn’t effective in Green Bay, but the Bears have allowed 57 sacks this season (third worst in the league). Even if Hunter and Smith sit, it’s a good opportunity for D.J. Wonnum and Patrick Jones on the edges along with the interior pass rushers such as Dalvin Tomlinson (who had the only sack of Aaron Rodgers last week), but it’s probably a good idea to get Tomlinson out early given his importance on the interior D-line.

6. Win the turnover battle: last week was a big problem in this area, with the Vikings minus-4 to drop their season ratio to plus 2. The Bears are minus-2 on the year, and the biggest play in the earlier meeting was Cam Dantzler stealing the ball from ex-Viking Ihmir Smith-Marsette to clinch the victory.

7. Greg Joseph makes his outdoor kicks & cover kicks: the temperature is expected to be in the 30s, but it’s always windy in Chicago, so this will be a good test for Joseph after his recent hot streak was broken with two missed field goals in Green Bay. The kickoff coverage unit must be better after giving up the 105-yard TD return to Keisean Nixon last week.

Jeff’s Prediction: Cousins says the Vikings haven’t won a division road game this season after losses in Detroit and Green Bay, so here’s a very winnable one. The Bears brass probably wouldn’t mind dropping this game as long as Houston beats Indy, as that would give the Bears the top pick in the 2023 draft (of course, they’ll play to win, but sitting Fields sends a message that it’s not a crucial game for the Bears). I think the Vikings will build an early lead and then milk the clock while Nick Mullens plays at least half the game (and he did throw a nice late TD pass to Osborn last week). I’ll pick the Vikings 24-20.

1. Our thoughts — and those of the entire NFL community — are with Damar Hamlin and his family after the Bills safety suffered cardiac arrest in an awful moment after a tackle of the Bengals Tee Higgins in the Monday night game at Cincinnati. We’re all hoping for the best for Hamlin. The quick response by the medical staff in attendance is a reminder for all sports events at all levels to be prepared with defibrillators and people who know how to administer CPR in life-threatening situations such as Hamlin’s.

2. The NFL is in an unprecedented spot with trying to decide whether to move the start of the playoffs back one week to allow Buffalo and Cincinnati to finish the game that was postponed late in the first quarter (with the Bengals leading 7-3) when Hamlin suffered his cardiac arrest. It has a bearing on the race for the AFC’s top seed between Kansas City, which currently holds the spot by a half-game over Buffalo, and one game over Cincy (and the Bills would win the tie-breaker over the Chiefs if both finish 14-3 since they won in K.C. this season).

3. Other big games this weekend that will decide playoff berths and seeding besides Arizona at San Francisco that is of primary interest to the Vikings: Detroit is at Green Bay on Sunday night with the Packers gaining the No. 7 seed with a win but if the Lions win, they only make the playoffs with a Seattle home loss to the Rams. Dallas still has a shot at the NFC East title and the top seed if they beat Washington, while Philly loses to the Giants and San Fran falls to Arizona. Not a likely trifecta, especially with the Giants locked in at No. 6, so they’ll probably rest key players such as Barkley and QB Daniel Jones.

In the AFC, the Jaguars and the Titans meet in Jacksonville on Saturday night with the AFC South title on the line. I like the Jags to beat the faltering Titans, especially with QB Ryan Tannehill out and Jaguars QB Trevor Lawrence has played well down the stretch. New England holds the No. 7 seed, but they need to win in Buffalo or open the door for Miami (home vs. Jets) or Pittsburgh (home vs. Cleveland). It will be very tough for the Bills to refocus this week after what happened in Cincinnati. Other key games are Chiefs at Raiders and Bengals hosting the Ravens. 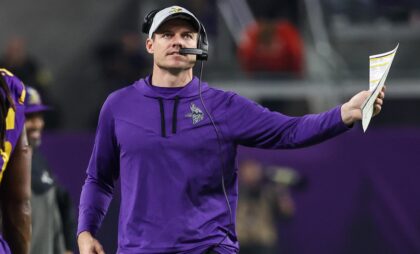 Also Read:
Vikings Have 2 Weeks to Right the Ship before Playoffs