It’s Playoff Time after Win No. 13 in Chicago

Kevin O’Connell and the Vikings checked all their boxes on Sunday in Chicago. They finished this exciting regular season on a high note with a 29-13 victory to gain win No. 13 (for only the third time in franchise history). They finished with a 4-2 divisional record and a sweep of the Bears. The starters got good work in a strong first half. Kirk Cousins was sharp, and Justin Jefferson had four more catches for 38 yards to finish his historic season as the league leader with 128 catches for 1,809 yards.

The defense held a Justin Fields-less offense to 259 total yards and 2-of-12 on third and fourth down while forcing two turnovers (the Vikings are now 8-0 this season when they have at least two takeaways, a good formula for playoff success). And Greg Joseph got back on track by making his last four kicks (after a failed PAT) in the cool weather, a good change from his two missed field goals in Green Bay.

It’s Playoff Time after Win No. 13 in Chicago

Most importantly, the Vikings did not sustain any significant injuries, and O’Connell said the team should have all players on the roster ready to go this Sunday at 3:30 pm in the NFC wildcard round playoff game against the Giants (including center Garrett Bradbury if his back holds up in practices this week, tackle Blake Brandel and tight end Irv Smith Jr. who returned from his ankle injury with three receptions against the Bears and provides another target for Cousins).

As expected, the 49ers routed the Cardinals to hold the No. 2 seed, so it’s No. 3 Minnesota against No. 6 New York in a rematch of the Week 16 thriller won by the Vikings on Joseph’s club record 61-yard walk-off field goal.

The Giants rested key starters in their 22-16 loss at Philly, including QB Daniel Jones and their two Pro Bowlers — running back Saquon Barkley and defensive tackle Dexter Lawrence.

Here are my other reactions to the Vikings win over the Bears, their first two-score win since the opener against the Pack (with 11 one-score wins in between):

1. The Vikings got the bad taste out after the Green Bay loss with a solid performance in Chicago. The game went just as O’Connell hoped, with the starting offense dominant (297 first-half yards, including 225 passing yards and 85% completions by Cousins). The Vikings punted only once in the game, on their final possession.

2. I liked O’Connell and Cousins getting the quick passing game and some bootlegs going in the first half off play action, especially on the last drive of the second quarter (which should have ended in a field goal but Cousins made a mistake by throwing short with only 20 seconds left and the Vikings players didn’t get off the field before the half ended). It’s unlikely Cousins will have time for deep drops and long-developing pass plays in the playoffs after losing top tackle Brian O’Neill and with Bradbury hoping to return from his back injury.

3. A decent running game will also be needed in the playoffs. Alexander Mattison had an excellent game with 54 rushing yards on 10 carries and 2 TDs (his first multi-TD game of his career). Dalvin Cook killed a good first-quarter drive with his league-leading fifth lost fumble this season (his third in the last five games). Cook must hang onto the ball in the playoffs, and I thought he should not have come back into the game after leaving late in the first quarter when a cleat cut his knee. Why risk him at that point?

4. K.J. Osborn continued his late-season charge with five catches for 117 yards. He has 30 receptions for 388 yards and 3 TDs over the last five games. The 66-yard pass play from Cousins to Osborn to set up the Vikings’ first TD (to Adam Thielen) was a great play design in which the Bears jumped on Jefferson and T.J. Hockenson as they were bunched with Osborn, who would up wide open.

5. The Vikings revamped offensive line (with Oli Udoh in for O’Neill and Chris Reed for Bradbury) did not allow Cousins to be sacked, but the Bears rank last in the league in the category. Reed played much better than he did in Green Bay, but the Vikings need Bradbury back this week as Lawrence was tough to handle last time (6 tackles, 1 tackle for loss, 1 QB hit) when Bradbury was out, and Austin Schlottmann was the starting center.

6. Other than an interception on an underthrown pass, I thought backup QB Nick Mullens was impressive in the second half (11 of 13 for 116 yards). The Vikings should feel they’re set with Mullens as a much better No. 2 than Sean Mannion was in recent years. I also liked rookie receiver Jalen Nailor’s play, with four catches for 62 yards. He looks like he could play a bigger role in 2023. C.J. Ham also made several fine catches in a four-reception day for 47 yards, and his lead blocking was key for Mattison.

7. Za’Darius Smith did not play, so he should be fully healthy for the Giants. The pass rush will be a crucial factor and only produced one sack and 3 QB hits against the Bears. The pass rush must be strong against a leaky Giants offensive line. The Vikings sacked Jones three times (two by Danielle Hunter) and had 11 QB hits in the December 24 victory, but Jones still threw for 334 yards with one TD and one interception.

8. It was nice to see corner Duke Shelley get his first career interception to seal the victory (against his former team) with 3:20 remaining. He gets picked on a fair amount, but he’s been a valuable addition and has broken up eight passes this season. He’s likely to continue as the starter over Cam Dantzler in the playoffs. Dantzler was off to a good start this season but has been inconsistent since his ankle injury, which opened the door for Shelley.

9. It was reassuring to see the kickoff coverage unit do a better job than in recent weeks, holding the Bears to a 20.5-yard average. Back in the dome this week, Joseph can boot it out of the end zone before possibly kicking outside again in San Francisco if both teams win this Sunday.

Playoff weeks are the best time of year on the NFL calendar, and it should be an exciting — and extremely loud — environment at U.S. Bank Stadium for the first home playoff game since the Minneapolis Miracle victory over the Saints in 2017. It’s somewhat unfortunate for the Vikings that Jones and the Giants were just in the building three weeks ago to have a test run, but the noise level is likely to be even higher with the stakes elevated this Sunday.

Around the NFL Observations in Week 16:

1. What a moment when the Bills’ Nyheim Hines returned the opening kickoff 96 yards for a touchdown in emotion-packed Buffalo to jump-start the Bills to a 35-23 win over the Patriots on the day dedicated to Bills safety Damar Hamlin. It was great to hear Hamlin was released from the hospital in Cincinnati on Monday after his scary cardiac arrest during last week’s game. He is now in a Buffalo hospital being monitored. Hamlin Facetimed with his team after the game and was presented the game ball, which was also a great moment.

Hines added a 101-yard kickoff return TD in the third quarter. Buffalo eliminated New England with the win, and Miami claimed the AFC’s No.7 seed by beating the Jets. The Dolphins travel to Buffalo on Sunday for a wild card game.

2. It was exciting to see the Lions knock out Aaron Rodgers and the Packers with the 20-16 Sunday night win in Lambeau. Loved the aggressiveness of Coach Dan Campbell and his Lions, including a nifty hook-and-ladder play for a key first down late in the game and then going for the win on fourth down rather than kicking a field goal to give Rodgers a shot to tie the game. The Lions, unfortunately, were eliminated when the Seahawks beat the Rams, thus, Seattle claimed the final NFC playoff spot when the Packers lost.

I’m happy to see the egomaniac Rodgers eliminated, but now we have to hear about whether he’ll retire, be traded, or return to Green Bay in 2023 (his future is “a beautiful mystery,” as Rodgers loves to tell us). Count on him returning for one more year, as the dead money hit on the Packers’ salary cap is too much to trade or release him, and I don’t see him retiring and giving up a $58 million bonus that is guaranteed if he plays.

3. I was not surprised that the NFL made Dallas at Tampa Bay the Monday night wild card game with Tom Brady and the Cowboys as drawing cards. Other matchups include the two Saturday games—Seattle at San Francisco and the Chargers at Jacksonville—and the Sunday nighter—Baltimore at Cincinnati in a rematch of Sunday’s 27-16 Bengals win, with the big question being whether Lamar Jackson will play after missing the last five games with a knee injury. The victories by the Eagles and Chiefs over the weekend wrapped up their No. 1 seeds and first-round byes, while Jacksonville beat Tennessee 20-16 to claim the AFC South crown with a fifth straight win.

4. Black Monday struck the coaches with the firing of Houston’s Lovie Smith and Arizona’s Kliff Kingsbury. There are openings in Carolina, Indianapolis, and Denver, and others will surely come soon. Last year there were 10 new coaches hired, including the Vikings with O’Connell, who has had an outstanding first season as he heads into his first playoff game against fellow first-year Coach Brian Daboll. 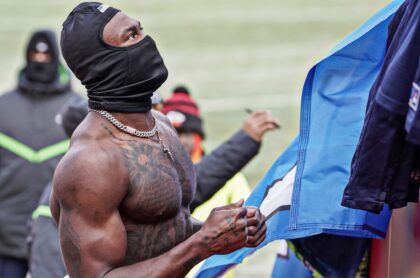