It’s time for some final predictions for Vikings football during the regular season before we head to the playoffs.

The Minnesota Vikings regular season ends at Soldier Field on Sunday, with a divisional meeting against the Chicago Bears. Minnesota leads the series 64-57-2 in games dating back to 1961 when the Vikings joined the NFL. The Vikings have also had the better of the most recent encounters, winning the last three and the last two games in Chicago.

The Vikings are expected to keep that run going as a team preparing for the playoffs, while the Bears, who only have three wins this season, can secure the number one draft pick with another loss and a win for the Houston Texans against the Indianapolis Colts. Furthermore, Chicago’s starting quarterback Justin Fields has been ruled out of the game with a hip injury.

With a slim chance of still claiming the number two seed in the NFC playoffs, should the San Francisco 49ers slip up against the Arizona Cardinals, plus the abject performance against Green Bay last week leaving a sour taste in the mouth, the Vikings are expected to play their starters — at least to begin with. They’ll be looking for a response to last week’s disappointment.

Time then for some bold predictions.

Justin Jefferson is 193 yards behind Calvin Johnson’s single-season receiving yards record. He looked in prime position to break Megatron’s record until his one catch for 15 yards outing in Green Bay. However, it’s still possible that Jefferson can do it. He amassed 154 yards against Chicago in the reverse fixture, and the Bears have injury problems at cornerback. Jaylon Johnson has been ruled out, and Kyle Gordon is questionable.

Jefferson will have the asterisk of playing an extra game, but I predict he will get his record. I only doubt whether the Vikings coaching staff pull him from the game early to rest him for the playoffs. With that in mind, look for some big downfield shots to Jefferson in the first half. If they come off and Jefferson starts to get close. The Vikings will give him a chance. A big performance from Jefferson could also solidify his claim to be the offensive player of the year.

Having beaten Green Bay by 16 points, it has been 11 one-score wins for the Vikings. A lot has been said about Minnesota being unable to win more convincingly. This game gives the perfect opportunity to ramp up the score and have a big win — something to make everyone feel positive going into the playoffs.

I predict the Vikings will finally have that big win and sandwich all those one-score wins with two-score wins at the beginning and end of the regular season. My official prediction is 31-16.

Peterman Has More Passing Yards Than Fields in Week 5

If a quarterback is looking for a game to get a good number of passing yards, the Vikings are the team to play. Only the Tennesse Titans give up more passing yards per game. Nathan Peterman only has 598 passing yards in his five-year NFL career, which includes just four starts prior to Sunday.

Justin Fields had 208 passing yards against the Vikings in Week 5, one of only two times he went over 200 yards this season. My boldest prediction this week is that Peterman beats that 208-yard mark. It won’t do the Bears much good regarding winning, as I think the Vikings defense will force multiple turnovers. 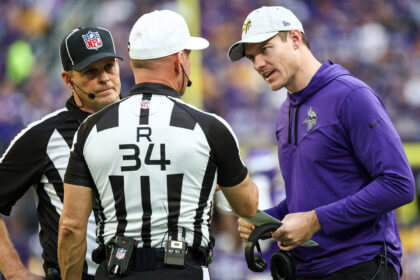