In 1998, Vikings placekicker Gary Anderson didn’t miss a field all season—until the playoffs. And now in 2022, Kirk Cousins and the Vikings didn’t lose a one-score game all season—until the playoffs. A coincidence? Yes—one has nothing to do with the other unless you think of them in terms of being the way the Vikings’ fortunes turn from season to season. If the Vikings are going to win by a certain sword, they will eventually lose by it–and they did so on Sunday in their 31-24 loss to the New York Giants in the Wild Card game at U.S. Bank Stadium.

With the loss (which seemed a possibility throughout most of the game except after the Vikings opening drive for a touchdown) comes the renewed chirping of the Vikings being frauds with their gaudy regular season record: “They were lucky. They didn’t deserve to be there. They were always going to lose in the playoffs.” Well, some of that has merit. And some of it is horse hockey.

The Vikings were a good team (not great) that put themselves in position to win games all season long—and they won enough of them (13) to take the NFC North Division and garner a home playoff game. What they weren’t, however, was a solid team throughout the roster that could dominate in the postseason.

The defense was a liability at times this season and that showed up in spades on Sunday. A unit that gave up more than 400 yards often late in the season, surpassed that benchmark again on Wild Card Sunday (allowing 431 yards). The Giants punted only twice and the Vikings never had an answer for a running Daniel Jones and a balanced New York offense. The Vikings offense did their part (at times), but in the end it wasn’t enough to help the defense—which will need plenty this offseason.

The final result is a quick exit from the playoffs and a plunge into the offseason, where a lot of tough questions must be answered and much will be debated. We will start that debate here at the Vikings Territory Breakdown podcast with Mark Craig from the Star Tribune. Nobody was hoping for this end, but we all knew it was a possibility. The Vikings late-season swoon (a beatdown from the Packers and losing a very winnable home playoff game on Sunday) exposed plenty of deficiencies that they can begin to address. And we will be here to break it down. 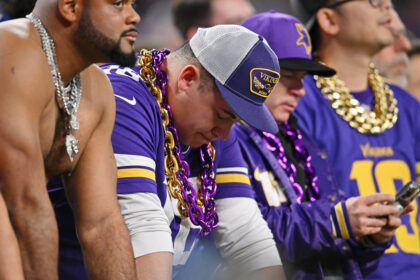