Vikings and Bears both Winners at Soldier Field

In the end, Vikings and Bears were both winners. The Vikings beat the Chicago Bears handily and escaped without any significant injuries, the Bears locked down the number one pick in the 2023 Draft for the first time since 1947 and I enjoyed my first trip to Soldier Field for a game (along with my son who lives there), sitting in the eighth row of the end zone on a balmy 34-degree day in Chicago in January. Heck, the biggest cheer we heard at the venue, which held as much Purple as Orange and Blue, was from a group of Bears huddled around a phone when the final score from the Houston-Indianapolis game came across. Bears fans had just lost and won in a matter of moments.

Such are the NFL’s vagaries in the season’s final weekend. A weekend that also provided all NFC North fans with more Sunday night revelry when the Detroit Lions, finding out moments before kickoff against the Green Bay Packers in Lambeau Field that their season would end this night—win, lose or draw—paid no mind. They had nothing to play for but pride and exemplified a boatload of it as they defeated the “win-and you’re-in” Packers in the final moments and ended their season as well. All of the NFL should show that kind of determination in each season’s final games. (I will heretofore vow not to call Detroit the Lowly Lions ever again and offer a warning to all Vikings fans to beware of the “restored roar,” as they also have a top 10 pick in the coming draft. They are not to be trifled with.)

But what a juxtaposition: A team (the Bears) with everything to gain in losing and showing it and another team (the Lions) with zero to gain in winning and holding nothing back in sweeping the perennial postseason-playing Packers into a long offseason of change, questions and drama surrounding a certain ayahuasca-swilling QB. Okay, so I guess not everybody ended up happy on Sunday?

But no matter. The Vikings finished the season 13-4 and are onto the playoffs, hosting the New York Football Giants in a Wild Card tilt next Sunday at U.S. Bank Stadium. We saw them a few weeks ago when the Vikings squeaked by the G-Men on a walk-off, 61-yard field goal by Greg Joseph, so there is plenty to preview about this big game. We will have it all for you here on the Vikings Territory Breakdown podcast with Joe Oberle from VT and purplePTSD and Mark Craig from the Star Tribune. Tune in and see how everyone around here is pretty happy. 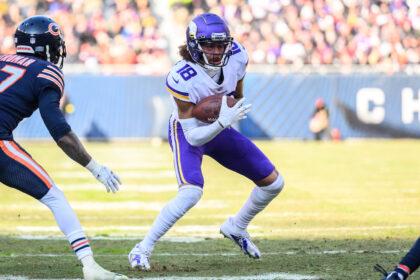