The Vikings Long Day’s Journey to a Defense Begins

When the malaise from the Wild Card playoff loss to the New York Giants finally subsided, we Vikings fans crawled from the wreckage and got ready to watch some Divisional Round football. Unfortunately, we were presented with the demolition of the Giants by the Philadelphia Eagles and faced the embarrassment of our favorite team having lost to the team that was so taken apart. It was demoralizing.

In fact, throughout the weekend, as the Niners, Bengals and Chiefs handily dispatched their divisional opponents, I was dismayed to recognize just how far the Vikings (particularly on defense) have to go consider themselves contenders in the later rounds of the playoffs. They deserved to be in the playoffs this season, but with a 31st-ranked defense (at the time of the season when defense is so important to success, they were basically spared a beatdown in San Francisco no matter how much we all wanted them to play in that game.

That makes the offseason huge for the Minnesota Vikings and its young staff led by GM Kwesi Adolfo-Mensah. They let go of their defensive coordinator Ed Donatell in what was the first step in the direction of fixing the defense, and now begins the process of finding his replacement and retooling a unit that dramatically underachieved during a 13-4 regular season. It is the only way forward—even though there is room for improvement for the offense as well.

Everything is fair game for this team, as they figure out how to compete at the next level. And we at the Vikings Territory Breakdown Podcast are here to discuss it. The Star Tribune’s Mark Craig joins VT and purplePTSD writer Joe Oberle as they try to figure out the Vikings’ next move and talk about the divisional round games and the last three games of the NFL season. Stop by and check it out.

Listen to Vikings Territory Breakdown on your favorite podcast network. 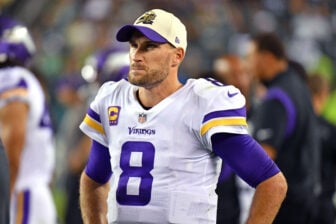 Vikings Territory Also Read:
The Vikings Have 3 Glaring Problems to Fix in 2023
Share: