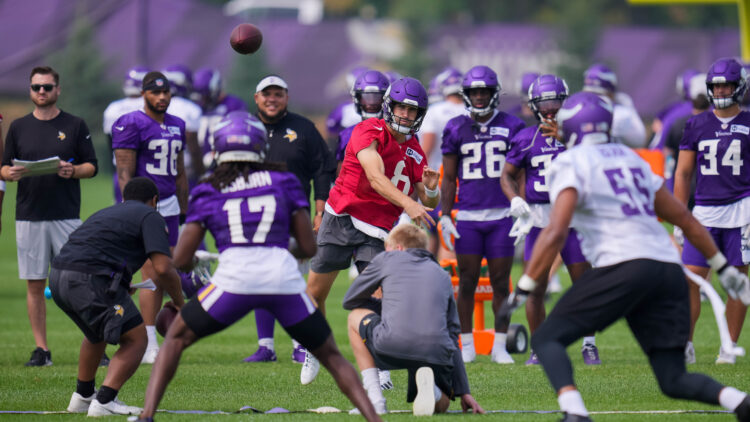 When I saw the Vikings upcoming training camp schedule that was released last week, I had to chuckle as my first thought was how easy today’s NFL players have it compared to when I started my NFL front office career in the Bud Grant/Fran Tarkenton/Purple People Eaters era.

Kevin O’Connell’s first training camp as Vikings head coach will consist of a July 26 reporting date followed by light, easing-in practices for several days before the more intense work begins. Under the CBA, teams can hold up to 16 padded practices in training camp, but O’Connell and his new head trainer Tyler Williams want to limit the players’ injury exposure by having only nine padded practices and no more than two in a row. The team gets full days off at least once a week — all, of course, taking place at the Vikings plush headquarters in Eagan.

In great contrast, my first Vikings camp back in the 1970s consisted of the players, coaches, and staff (including me as a young assistant PR Director) relocating to Mankato State University for six weeks. The team held meetings and practices seven days a week (with only one night of no meetings) and two-a-day practices were the norm, with almost all of them in full pads while toiling in the summer heat.

Since I was not a big fan of leaving my family for six weeks in Mankato during my Vikings years, I was thrilled in my five years with the Tennessee Titans when we held training camp at our Nashville facility. The days were still long, but at least I was able to go home at night. It was still padded practices virtually every day for five weeks for the players, and thankfully in 1978, the NFL had cut back to four preseason games (which I always thought was still two games too many as I was so nervous about losing a starter to a lengthy injury in a meaningless game).

I actually think it’s a great thing for today’s Vikings and other NFL players who can participate in training camp at their home facilities and have much less full contact in practices. It definitely will extend the careers of most players, and in my work with the local agent firm IFA, I’m happy for the players we represent that they’re not forced to hit as much in practices, and for the starters, their play time consists of about three quarters over the three preseason games plus two days of full-contact scrimmages with another team (that being the 49ers at Vikings HQ on August 17-18).

But Vikings-greats such as Tarkenton, Alan Page, and Carl Eller have to roll their eyes when they see how much easier today’s players have it at training camp. And I always remind my friends now working in the Vikings front office staff of their good fortune compared to my first season when I was married on July 10, left for six weeks in Mankato 10 days later, and I was only able to stay at my Twin Cities home one night per week (and had to leave at 6:00 am to get back to Mankato when our camp office opened at 7:30 am).

Speaking of the Vikings of yore, I was thrilled to see the late long-time Vikings head trainer, who we called Zambie, recognized by the Pro Football Hall of Fame with an Award of Excellence. Visitors to the Hall of Fame in Canton, Ohio, will hear of his great contributions to the Vikings, the NFL, and the athletic training profession.

I worked very closely with Zambie for 20-plus years, especially in my eight years as Vikings GM. He was always current in his training expertise and a great protector of the players’ health and safety during his career, along with being a big part of the heart and soul of a great franchise and so knowledgeable about Vikings history. And training camp time reminds me of Zambie’s legendary bocce ball games behind the Gage Hall dorm in Mankato.

On the Soon-to-Be Big Sixteen and Perhaps More

As was likely the case for most college football observers (and in my NFL agent work, I have to keep a close eye on college football), I was surprised but not shocked by the news of USC and UCLA leaving the Pac-12 to join the Big Ten as early as 2024. And now there are rumblings that Oregon could bolt for the Big Ten along with other Pac-12 schools such as Washington and perhaps Notre Dame.

When Texas and Oklahoma rocked the college football world last year with word that they were joining the SEC, there was some logic to it since Texas A&M and Missouri are nearby, current SEC members. But this reach way out west to grab USC and UCLA seems crazy until you consider the additional TV money that the Big Ten will generate through the inclusion of the L.A. market and these two glamour schools.

Huge NIL deals for athletes (a great thing for the young athletes able to capitalize), radical conference shake-ups…college sports is now more professional than ever before, and the NCAA can’t stop this runaway train. Watching how things unfold further in the coming months and years will be fascinating.