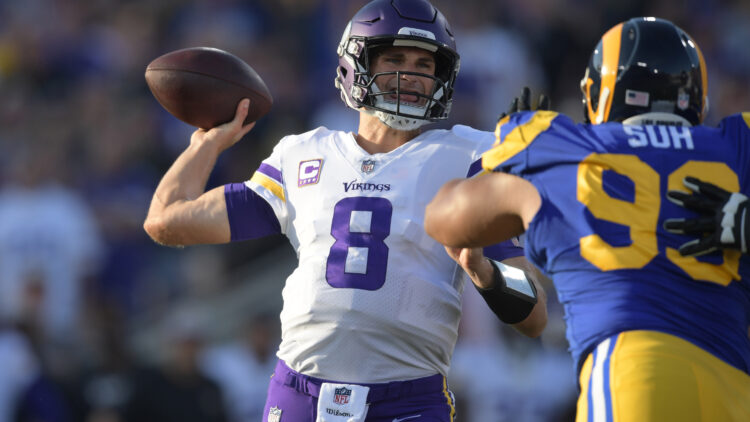 Kirk Cousins, the Vikings’ lightning rod quarterback, is back for at least one [and perhaps two more] years after his extension through 2023 was announced as free agency commenced this week.

This was the big news locally on the Purple front. At the same time, Tom Brady’s ridiculous unretirement (he should never have retired so soon after last season)— was the hottest NFL story nationally.

Meanwhile, as usual in the early days of free agency, the comings and goings were fast and furious as GMs traded or cut players to get under the salary cap and then fortified their rosters with new signings. The good news for the Vikings is their chief NFC North rivals in Green Bay and Chicago have lost some dominant players due to salary cap-motivated trades and releases (such as pass rushers Za’Darius Smith of the Packers and the Bears’ Khalil Mack).

Back to Cousins, Vikings fans will have their favorite punching bag to blame—often unfairly—after losses. But the alternative of trading Cousins and going with an unproven young QB or stopgap vet was viewed as much less desirable by the Vikings brass, especially when it quickly became apparent that no team would step up with a Russell Wilson or Matthew Stafford type deal involving several top draft picks.

I think it was the right call to keep Cousins as starting QB and try to upgrade the interior offensive line to bolster his protection while also spending money to improve the defense that was the main culprit in costing the team a playoff spot the past two seasons. I’d also like to see the Vikings draft a QB in the second or third round of next month’s draft and have him compete with Kellen Mond for the No. 2 QB spot and perhaps be the heir apparent in a year or two.

So it unfolded as I predicted with Cousins’ extension that included two voidable years. New GM Kwesi Adofo-Mensah was able to trim almost $14 million off the 2022 cap, which was necessary with Minnesota $15 million over the cap before the Cousins move. Now it’s up to new coach Kevin O’Connell and his staff to further elevate Cousins’ performance.

I also think it was the right move to release defensive tackle Michael Pierce, a good player when he was on the field, but unfortunately, he missed 25 games the past two seasons with his COVID opt-out and a torn triceps. That saved about $6 million in cap room, and the Vikings are signing ex-Bill Harrison Phillips for $6.5 million per year. He’ll be in the D-line rotation with LaDainian Tomlinson and Armon Watts (and Watts, a 5-sack player last season, also can move to defensive end in the new 3-4 scheme).

Once Danielle Hunter’s status is resolved in the next few days so his $26 million cap hit is reduced and perhaps with a couple of other vets restructured, the Vikings will then have the cap room to re-sign some of their key free agents such as cornerback Patrick Peterson, defensive lineman Sheldon Richardson and tight end Tyler Conklin if they’re affordable. But linebacker Anthony Barr may now be headed elsewhere after the Vikings signed ex-Cardinals linebacker Jordan Hicks who has impressive stats (three straight 100 plus tackle seasons and four sacks last year), and at $5 million per year on a two-year deal, Hicks is cheaper than Barr who also has been injury-prone.

Minnesota also should be positioned cap-wise to find help in the open market at their much-needed cornerback position along with edge rusher and in the interior offensive line. Plus, the departure of safety Xavier Woods to Carolina creates a starting spot. That could be filled by second-year man Cam Bynum who has more speed than Woods and looked good in two starts last season, or perhaps a free agent will come in (ex-starter Anthony Harris is available).

An under-the-radar move this week was the right-of-first-refusal tendering of kicker Greg Joseph at over $2.3 million. Joseph rebounded from some early struggles last season (such as missing a potential 37-yard game-winner in Arizona) to make his last 21 kicks. He has a big leg as demonstrated by making 7 of 9 field goals from 50 yards or more and having an excellent touchback percentage on kickoffs.

I didn’t like that the Vikings lost center/guard Mason Cole to the Steelers on an affordable $5 million per year deal when he played better than Garrett Bradbury in several 2021 starts.

Stay tuned as more moves by the Vikings and the other 31 teams are revealed in the coming days, with the 2022 league year now underway.

1.Hits to the Packers and Bears—As mentioned earlier, Minnesota’s two division rivals look weaker in 2022 due to the loss of several key players for each team. With Aaron Rodgers and Davante Adams back, Green Bay is still the clear favorite in the division, but their list of departing starters includes top pass rusher Za’Darius Smith, who was injured most of last season but tormented the Vikings in the past. The Pack also released a fine starting offensive tackle–Billy Turner, who grew up in the Twin Cities (Mounds View). Chicago traded Khalil Mack to the Chargers and is likely to lose another Vikings-killer—Akiem Hicks in free agency. A fine receiver in Allen Robinson also is expected to sign elsewhere, and the Steelers signed one of the Bears top offensive linemen in guard James Daniels.

Green Bay was able to re-sign former Gopher linebacker De’Vondre Campbell after his All-Pro season to a 5-year, $50 million deal.

2. Deshaun Watson—Now that he will not be criminally charged in connection with the sexual assault and harassment cases, teams have begun meeting with the quarterback. The 22 civil cases against Watson are still pending, but the reality is with the possibility of jail time no longer in play, he will likely be traded before the draft, and the candidates include New Orleans, Carolina, Atlanta, and Cleveland—so far. I would expect an NFL suspension of some length under the league’s personal conduct policy will be announced once Watson is with a new team.

3. Another old Vikings foe—QB Mitch Trubisky—will attempt to succeed the retired Ben Roethlisberger in Pittsburgh, but I anticipate the Steelers will draft a QB in the first or second round to provide competition for Trubisky, who will always carry the stigma of being drafted ahead of Patrick Mahomes and Watson in 2017.