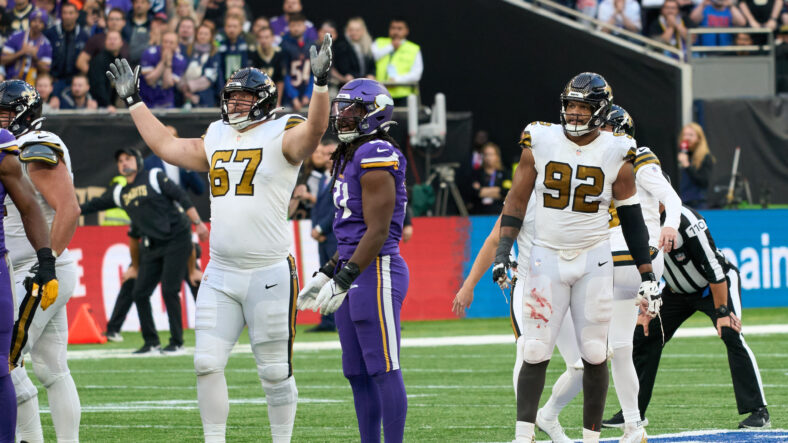 The good news is the Vikings are 3-1 and leading the NFC North after beating the banged-up but feisty Saints 28-25 in London. The two teams put on an exciting show in this international showcase for the NFL, but all that really matters is that the Vikings got a W in a game they had plenty of chances to put away before it came down to field goal kickers at the end.

For the second straight week, the Vikings needed a late rally to win a game against an opponent not among the NFL’s elite through four games. In an unpredictable NFL, things rarely go perfectly, and that was clearly the case for the Vikings on Sunday when they scored on six of their last seven possessions, but five of those scores came on Greg Joseph field goals, including the 47-yard game-winner with 24 seconds remaining.

And the Vikings, their fans in London and back home, still had to sweat out Saints kicker Will Lutz’s double doink miss that would’ve sent the game to overtime.

Here are my other reactions to Sunday’s win in lively Tottenham Hotspur Stadium in North London (with a good mix of Vikings and Saints fans along with the Brits in the house):

1. After slow starts the past two weeks, the Vikings had a great opening drive that included getting Justin Jefferson a couple of early catches on his way to a big day. Alexander Mattison followed excellent blocks from Adam Thielen and Christian Darrisaw for the TD on a well-executed screen. The Vikings defense then stopped the Saints’ first drive with a Za’Darius Smith sack of Andy Dalton, who started in place of injured Jameis Winston (three other top Saints offensive players were out—receiver Michael Thomas, running back Alvin Kamara, and guard Andrus Peat).

2. The Vikings early momentum stalled after Lewis Cine fractured his lower leg on Jalen Reagor’s punt return, and Kirk Cousins messed up the opportunity to take control of the game with a bad interception. Cousins had an up-and-down day as he felt the heat from Cam Jordan and the Saints pass rushers. His delay of game penalty at the Saints 3-yard line was something that should never happen to a veteran QB. But Cousins came through on the game-winning drive with a perfect 39-yard deep ball to Jefferson that set up Joseph’s winning kick.

3. The Vikings rushing game was ineffective much of the day until Dalvin Cook had a 14-yard run on the last drive. The Saints entered the game with the league’s 26th-ranked run defense but held the Vikings to 81 yards on 25 carries (a 3.2-yard average). The offensive line and tight ends must be better in coming weeks with their run blocking and also shore up the pass protection as Cousins was often under pressure. Memo to the coaches: it’s not a good idea to have tight ends trying to single block a premier defensive end like they tried to do against Jordan.

4. Jefferson had a huge bounce-back game after two low-production weeks. He repeatedly beat Pro Bowl corner Marcus Lattimore in single coverage, finishing with 10 catches for 147 yards and his first career rushing TD that put the Vikings ahead 25-22 with 4:20 remaining. Jefferson also had a drop, and Cousins missed him wide open in the right corner end zone after J.J.’s 41-yard reception set up a first-and-goal from the New Orleans 3-yardline in the third quarter.

Johnny Mundt also had a costly third-down red zone drop that forced a second-quarter field goal. There have been too many drops in the past three weeks.

5. The Vikings must be better at turning takeaways and big special teams plays into touchdowns, not field goals. It happened three times in this game—following Dalvin Tomlinson’s forced fumble on Dalton that was recovered by Harrison Phillips, on Kris Boyd’s forced fumble and recovery in punt coverage, and after the exciting fake punt executed by punter and former high school QB Ryan Wright to rookie Jalen Nailor. On each occasion, the offense bogged down.

6. Once again, third down conversions were a problem for the Vikings offense, going 5 of 14 after converting 10 of 34 the first three weeks. That’s 31% on the season, which needs to quickly improve as top teams are in the 40-50% range.

7. For the second straight week, the Vikings pass rush was not as effective as it needed to be, especially when facing another immobile QB in Dalton after not consistently pressuring Jared Goff. Finally, defensive coordinator Ed Donatell sent Harrison Smith on a couple of blitzes on the Saints’ final drive, forcing critical incompletions.

8. The Minnesota run D must be more consistent. Ex-Viking Latavius Murray averaged 5.2 yards per carry and ran over Akayleb Evans and Cam Bynum for a third-quarter TD. Ross Blacklock was ineffective in his limited relief role.

9. With Cine now lost due to injury, Bynum must step up his game. He was the closest defender on the 32-yard pass play from Dalton to Olave in a prevent defense that set up Lutz for his 61-yard final attempt.

10. The Saints lived up to their undisciplined reputation after entering the game as the second most penalized team in the league. They committed 10 penalties for 102 yards, including a massive 41-yard pass interference on Lattimore against Thielen to set up Vikings final TD

O’Connell, Cousins, and Thielen all emphasized postgame that they were happy to get the win and be 3-1, but they have a lot to clean up going forward and “need to be more consistent on offense and defense,” according to O’Connell.  Cousins added, “We feel great about the win, but we’ve got to be better, and I’ve got to be better. We’ve got to keep improving.”

1. Perhaps next Sunday’s home game will be when Cook busts loose as the Bears allowed 262 yards rushing in their 20-12 loss o the Giants that dropped Chicago to 2-2. Saquon Barkley ran for 146 yards as the G-Men improved to 3-1 heading into their London matchup with the Packers next Sunday. Green Bay also moved to 3-1 but had to go to OT against the Patriots before beating their third-string QB Bailey Zappe.

2. In the matchup of the two early MVP favorites—QBs Josh Allen of the Bills and Lamar Jackson of the Ravens–Buffalo and Allen rallied from a 17-point deficit to claim a 23-20 road win. But don’t count out Patrick Mahomes in that MVP race. He threw 3 TD passes in Kansas City’s impressive 41-31 victory at Tampa Bay. If you haven’t seen it, check out the replay of Mahomes making one of his vintage jump-flip passes for a TD to Clyde Edwards-Helaire.