NFL Rollercoaster Dives Down for Vikings in Surprising Blowout 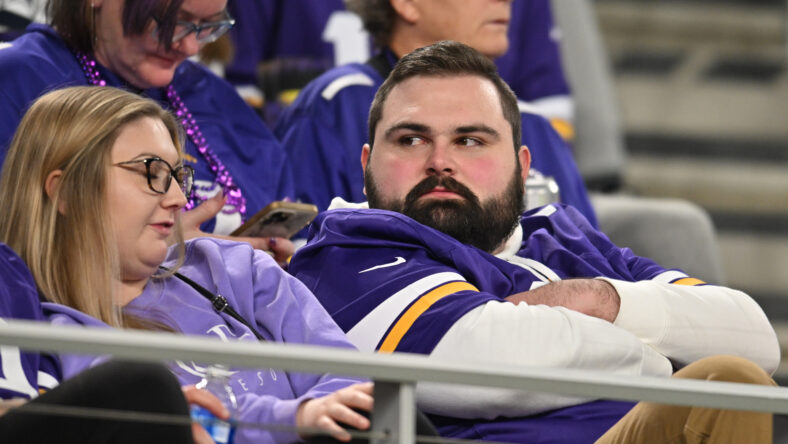 Life in pro sports and the NFL is a rollercoaster full of ups and downs. Rarely has that been more dramatic than the last two weeks, with the incredible high from the thrilling win in Buffalo and the awful low in the 40-3 home loss to Dallas.

It’s not a shock that the Vikings lost to a talented Cowboys team that has now beaten them three straight years in Minnesota. That can happen when a team is sitting with a huge division lead and coming off an emotional win. As Coach Kevin O’Connell said, “Sometimes you can get hit in the mouth. This league has a way of humbling any team at any point if you don’t play good football. We didn’t, and we have to learn from this.”

The big surprise was seeing an 8-1 team coming off seven straight one-score victories beaten badly in the trenches on both sides of the ball and losing by 37 points at home to a Cowboys team coming off a bad loss at now 4-7 Green Bay. It’s the second-worst home loss in team history behind a 56-13 defeat in 1963 by the St. Louis Cardinals. The Vikings had played close games with the Cowboys the previous three years (going 1-2). No one saw this coming, and it was ugly to see such a poor performance in the national TV doubleheader game.

Now, the team’s mettle will be tested in a short turnaround before hosting the 6-4 Patriots on Thanksgiving night in a chance for national TV redemption. Bill Belichick’s Pats are coming off beating the Jets for the 14th straight time on a last-second punt return TD and are in playoff contention at 6-4. They also rank No. 4 in defense and second in the league with 36 sacks, behind who else but Dallas (with 42) after their seven sacks of Kirk Cousins. Fortunately for the Vikings, the Patriots won’t bring the offensive firepower of Dallas.

“It’s an unbelievable challenge on a short week against a good football team,” O’Connell said. “I do believe we’ll respond to this in the right way.”

Here are my other reactions to Sunday’s abomination against Dallas:

1. Cousins was under siege much of the game as the sack total was a career-high, and he threw for only 105 yards as his league-high current TD pass streak was stopped at 39 games. The Vikings gave up on the run too soon against a team that had allowed over 200 yards on the ground the past two games and led the league in sacks. Dalvin Cook had some good runs early but only had 11 carries on the day for 72 yards (6.5 average). It’s obviously hard to stick with the run when you fall behind by four scores, but perhaps they could’ve stayed in the game by sticking with the run more.

2. It was not a good game for the Vikings coaches on either side of the ball. O’Connell needed to call more run attempts, and how about more snaps for a Pro Bowl fullback in C.J. Ham, who was in for only two offensive plays as Cook’s lead blocker in a game the Vikings needed to emphasize the run.

They also needed to call more quick passes for Cousins rather than have him do deeper drops that allowed the Cowboys rushers to wreck the game (starting with the Vikings’ third offensive play when phenom defender Micah Parsons strip-sacked Cousins who held it too long on the play before Parsons hit him from the blind side, setting up Dallas’ first field goal). The Vikings offensive coaches also needed to help tackle Blake Brandel with more chipping from tight ends and running backs as he could not match up one-on-one after Christian Darrisaw exited the game with another concussion after Darrisaw gave up his first two sacks of the season.

In a game like this, where Cousins is under constant pressure, get the ball out on quick throws via wide receiver screens or short slants to your superstar in Justin Jefferson, Adam Thielen, and K.J. Osborn. It’s the second straight year the Cowboys have shut down J.J. (3 catches for 33 yards on only five targets Sunday when he always should have double-digit targets, after 2 receptions for 21 yards on four targets last season).

Defensively, Ed Donatell should’ve given more help to rookie Andrew Booth Jr. in his first start as he was beaten several times for big plays, including a 35-yard hitch-and-go by Noah Brown to set up the final TD, and Booth missed a key tackle on CeeDee Lamb, setting up a first-and-goal from the Minnesota 2 which led to Dallas’ first TD on an Ezekiel Elliott run.

It also was not wise to expect linebacker Jordan Hicks to cover elusive back Tony Pollard man-to-man on a wheel route. This resulted in a 68-yard TD pass from Dak Prescott to Pollard on the first series of the third quarter that essentially put the game away at 30-3. And where were the linebackers and safeties on the 30-yard TD pass and run to a wide-open Pollard in the right flat late in the second quarter?

There were no sacks on Dak Prescott as he felt little heat in completing 22 of 25 passes for 276 yards and 2 TDs. A few more blitzes may have helped the cause. Dallas also was in third-and-short way too often as they ran it so well (151 yards).

It just didn’t feel like the coaches were making the right adjustments in this game.

3. Third downs were a disaster on both sides of the ball. Dallas was 12 for 17 (71%), while the Vikings were 1 for 11 (9%). That contributed to a 37 ½-22 ½ advantage for the Cowboys in time of possession. Those stats will get you beat any day unless you force turnovers, and for the first time this season, the Vikings had no takeaways.

4. Contributing to the lousy day were dropped passes (two by T.J. Hockenson, including a perfect throw from Cousins that would’ve put the Vikings ahead 7-3) and too many penalties (seven, of which several were false starts in their own stadium). It also was the worst tackling we’ve seen this season by the defense, including missed tackles from not wrapping up by star players such as Harrison Smith, Eric Kendricks, and Za’Darius Smith (who allowed Prescott to escape a sack in the second quarter that would’ve set up 2nd-and-22).

5. The Vikings need to get healthier. They’ve missed Dalvin Tomlinson’s run defense and inside pass rush as he recovers from his calf injury. I never thought I’d say this, but they need corner Cam Dantzler back. He was having a good season and is on injured reserve with an ankle injury for two more games. And they need to get Akayleb Evans back from his concussion, as he was playing much better as a rookie corner than Booth. Obviously, losing Darrisaw is a big problem for the O-line, and hopefully, he can return after the mini-bye following the Pats game to face the Jets strong pass rush on December 4.

And Za’Darius Smith has been terrific this season, but his troublesome knee needs to improve, as he only played 35% of the defensive snaps Sunday and had an unproductive game with only one tackle and no sacks, QB hits, or pressures.

6. What a tremendous 60-yard field goal by the Cowboys’ Brett Maher after the officials messed up another replay review, so Maher had to make the kick twice to close the first half. He made three field goals over 50 yards in this game.

7. As Cousins says, the good news is the Dallas loss only counts as one game. If you were told before the season that after 10 games, the Vikings would be tied for the NFL’s second-best record at 8-2, be 3-0 against divisional foes, have a four-game lead over Detroit, and 4 ½ games over archrival Green Bay, hold a two-game lead for the NFC’s No. 2 seed which leads to at least one and possibly up to three home playoff games AND had just split perhaps the toughest two-game stretch at Buffalo and home to Dallas—well, you and everyone at Vikings headquarters would’ve taken that in a heartbeat! But a 40-3 loss to Dallas—ugh!

Now we’ll see if the Vikings can bounce back against the Patriots, which looks like a difficult task, but at least the Vikings don’t have to travel on a short week, and the Patriots also are banged up on the O-line. More on this matchup and my prediction on Wednesday.

1. Detroit won its third straight game with a 31-18 upset victory at the Giants. And speaking of Detroit, the Bills rebounded from their stinging defeat to the Vikings by beating the Browns 31-23 in the game that was relocated to Detroit due to heavy snow in Buffalo. Josh Allen didn’t turn it over for the first time in several weeks to help get the Bills back on track.

2. It looked for a while like the Vikings would have a chance to move into the No. 1 NFC seed when the Eagles trailed the Colts late, but Jalen Hurts QB draw won it to move the Eagles to 9-1. Out west, Patrick Mahomes threw a last-minute scoring pass to Travis Kelce as the Chiefs rallied to beat the Chargers to basically lock up the AFC West (three-game lead) and claim the AFC’s best record at 8-2.

3. What a dreadful season for the defending Super Bowl champion Rams, who lost in New Orleans to fall to 3-7.