Keys to a Purple Win in Washington 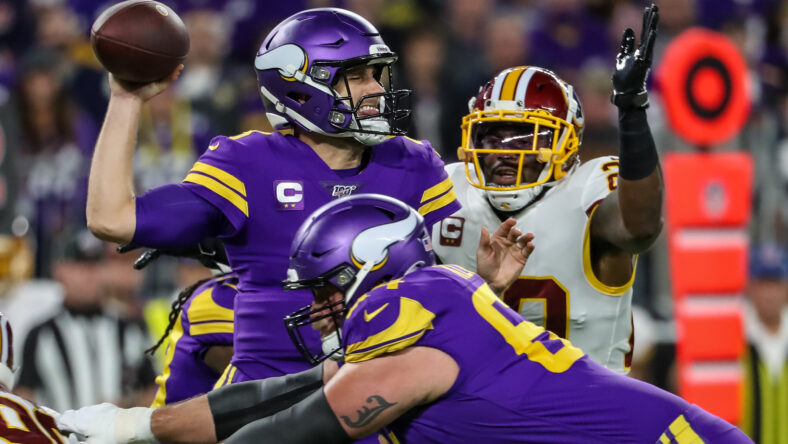 Rarely, if ever, has a team invested this much draft capital in one position group over four straight years. That’s the case for the Washington Commanders (hard to get used to that name), who will challenge the Vikings offensive line with this stout group, except that Young has just returned to practice from an ACL injury suffered last November. Coach Ron Rivera says it’s unlikely he’ll play this week.

As the Vikings seek their sixth straight victory, the play of the O-line will be of major importance as they try to open holes for Dalvin Cook and give Kirk Cousins time to throw to his excellent receiving corps that now includes newly-acquired tight end T.J. Hockenson.

On the other side of the ball, the Vikings turnover-causing defense appears to have an edge with their front seven against a Commanders O-line that has allowed 26 sacks (3rd worst in the league). NFC Defensive Player of the Month and NFL sack leader Za’Darius Smith will lead the charge against a shaky Commanders running game and try to pressure quarterback Taylor Heinicke (who began his NFL career in Minnesota).

Both teams have 21 sacks this season to rank 9th league-wide, but the Vikings have been better against the run (8th vs. 18th). Whoever wins the battle in the trenches on both sides of the ball should emerge victorious on Sunday in this battle of hot teams (Washington has won three straight, including a home victory over the Packers two weeks ago).

Here are my keys to the Vikings beating the Commanders:

1. Protect Cousins and focus on helping Ed Ingram in pass protection: it’s Cousins’ first game in Washington against the team that drafted him, and he’d love to have a big day and a win, but he needs his O-line to play well. After seeing Ingram struggle against J.J. Watt’s pass-rushing last week, the Commanders will likely challenge the rookie guard with a heavy dose of Allen and Payne. Ingram has been fine in run blocking, but head coach Kevin O’Connell and O-line coach Chris Kuper need to help him on passing downs with double teams. Center Garrett Bradbury is having a better season, but he also will be challenged in this game and may need some help.

2. Run Cook and Alexander Mattison for 100 plus yards combined: They’re going against Washington’s No. 18 run D that may be missing their leading tackler in middle linebacker Cole Holcomb, who has missed practices this week with a foot injury. That will set up the passing game (as usual, get the ball to Justin Jefferson and Adam Thielen), and it will be interesting to see how the Vikings utilize Hockenson this week now that Irv Smith Jr. is on injured reserve (ankle). I salute GM Kwesi Adofo-Mensah for adding a Pro Bowl tight end at a reasonable cost (not giving up a No. 1 pick for a former top 10 pick). It sends a strong message to the Vikings players, coaches, and fans that the team is all-in on a playoff run this season.

3. Continue the formula of first-drive TDs and red zone TDs on offense, winning the turnover battle and getting back to fewer penalties: The Vikings have scored on their opening drive in three of the last four games, which has gotten them off to good starts and they went 5 for 5 on red zone TDs last week which is great production where it counts. They are now plus 6 in turnover ratio to rank tied for second in the NFL, while the Commanders are minus 4. And after having only 25 penalties in the first six games, the Vikings had a flag-filled day with 10 penalties against Arizona. Time to get back to more disciplined play by cleaning it up in that area.

4. Stop a weak rushing attack and get after Heinicke: Washington is 24th in rushing offense, and their leading rusher — Antonio Gibson — has gained only 292 yards this season (compared to Cook’s 561 yards on the ground as the Vikings top runner). And keep that pass rush going that we saw in Miami (six sacks) and against Arizona (four sacks) by continuing to move Za’Darius Smith across the line of scrimmage to create mismatches. I also expect Danielle Hunter to crank up his sack total (3 now) over the last 10 games in the regular season and on into the playoffs as he becomes more comfortable in the new scheme.

It appears the Vikings may be without their fine defensive tackle Dalvin Tomlinson (calf) as he’s missed practice this week, so others may have to step up in his absence, along with Harrison Phillips continuing to play well up front.

5. Watch out for underrated receiver Terry McLaurin: he leads the team with 553 receiving yards and made the big play in last week’s win at Indy with a 33-yard reception to the 1-yard line, setting up the winning QB sneak by Heinicke. The Vikings have been hurt by top receivers recently, with Tyreek Hill and DeAndre Hopkins having big production. I’d like to see Patrick Peterson matched up more often with the opposing team’s best receiver, including McLaurin this week and Stefon Diggs next week in Buffalo.

6. Greg Joseph needs to step it up: he hasn’t cost the team a game yet, but his missed extra points — three in the last four games — and not converting from 50 yards plus (1 of 6 this season after making 7 of 9 last season) has prevented the Vikings from pulling away. The Vikings coverage units and kickoff returns by Kene Nwangwu could give them an edge on special teams, along with Ryan Wright’s solid punting.

Jeff’s Prediction: I trust O’Connell and the Vikings veteran leaders to ensure the team doesn’t look past the Commanders to next week’s big matchup in Buffalo. The Vikings are favored by 3 ½ — the same spread as last week against the Cardinals — and I expect the Vikings to once again win the turnover battle, put the heat on Heinicke, make enough plays running and passing, and emerge with a 24-20 victory to make Cousins 2-0 against his old team after beating them 19-9 in 2019 at home (Cook had 171 total yards in that game).

1. The news broke this week that Daniel Snyder has hired a firm to assist him in considering offers to sell the Commanders. That’s great news for the NFL and the Washington market that has been forced to endure a bad owner in Snyder, who has led the way in turning one of the league’s great franchises into an embarrassment with all of their off-field issues combined with not nearly enough on-field success.

2. The reeling Packers are taking well-deserved heat from the media and their passionate fan base after losing four straight games and then not adding any players via trade (when there were a record number of trades at the deadline this week). Despite their shaky wide receiver position, they allowed the Bears outbid them with a second-round pick for Steelers wide receiver Chase Claypool who would’ve been a good addition. Now the Pack head to Detroit. I’m picking Green Bay, but an upset by the lowly Lions would not be a shock.

The Bears also are taking heat in Chicago after signaling a rebuild by trading away the league’s top tackler in Roquan Smith to Baltimore after unloading top pass rusher Robert Quinn to the Eagles. They did make the move to acquire Claypool, but that’s not enough to satisfy Bears fans looking for wins over future draft picks in return for their best defenders.

3. Who would’ve thought a Week 9 matchup between the Rams and Bucs would see both teams under .500? These last two Super Bowl winners struggle to run the ball and protect their star QBs — Tom Brady and Matthew Stafford. Give me the Bucs at home in a close one.

4. Best game on this week’s schedule is the Sunday nighter with two AFC division leaders meeting as Tennessee travels to Kansas City. Titans running back Derrick Henry is on a tear, but I don’t see him providing enough offense against the high-scoring Chiefs and Patrick Mahomes coming off their bye, especially if QB Ryan Tannehill remains sidelined with his ankle injury and rookie Malik Willis is the starter. Willis threw for only 55 yards with an interception in last week’s win over the Texans that was delivered by Henry’s 219-yard rushing game (and 2 TDs), plus a solid defensive performance.

5. The Bills should warm up for the Vikings by making easy work of the Jets and their beleaguered second-year QB Zach Wilson who threw three interceptions in a home loss to the Patriots.